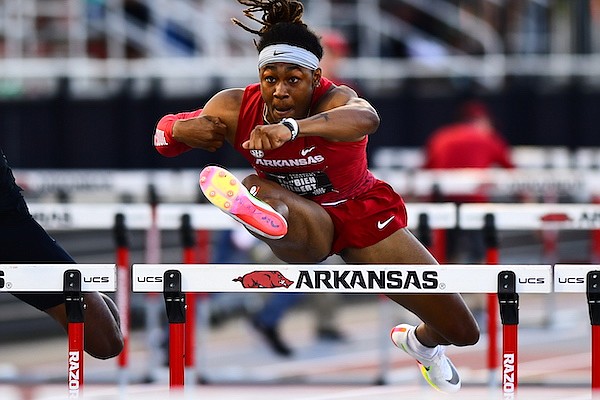 Arkansas hurdler Tre’Bien Gilbert competes during the USA Track and Field Championships on Friday, May 6, 2022, in Fayetteville.

FAYETTEVILLE — Athletes from 117 colleges competing at the NCAA Track and Field West Preliminaries this week at John McDonnell Field hope it’s the first step in a 1,620-mile trip.

That’s the distance from the University of Arkansas campus to Eugene, Ore.

The top-12 finishers out of 48 entries in each event at the West Prelims advance to the NCAA Championships held June 8-11 in Eugene.

Arkansas is hosting the West Prelims for the first time since 2014.

“I absolutely love it,” said Chris Bucknam, coach of the Razorbacks’ men’s team. “This is what this facility was built for. It’s great that it can handle this.

“The thing that’s unique about John McDonnell Field is that every event is held in the stadium. The long throws, the shot put, everything. All the kids that compete here get to be in the stadium.”

Arkansas will be well represented with a combined 42 men and women qualified in 29 events with 50 entries.

The meet will be held today through Saturday. Men will compete today and Friday, with the women going Thursday and Saturday.

“Our kids are excited about the idea that, ‘Hey, we’re at the first round of the NCAA Championships,’ ” said Lance Harter, coach of Arkansas’ women’s team. “We had a team meeting reiterating to them that it’s an honor to be here, but don’t take anything for granted.

“Just because you’re at home, there’s no free passes. There’s work to be done, and you’re going to have to compete your tails off to eliminate 36 people out of your event, because you’re cutting from 48 to 12.

“So we’ll remind them as often as we can that this is big-time.”

The East Preliminaries are in Bloomington, Ind.

“The West is so loaded across the board in event after event,” Harter said. “Nothing against the East, but the West just seems to be ridiculous how tough it is.”

Arkansas’ men’s team has 22 athletes in 16 events with 26 entries, led by Amon Kemboi, Patrick Kiprop and Emmanuel Cheboson in the 10,000 meters (tonight) and 5,000 (Friday night) and and Phillip Lemonious, Tre’Bien Gilbert and Matthew Lewis-Banks in the 110 hurdles (tonight).

“Emotionally we’re in a good state,” Bucknam said. “Everybody knows what needs to be done.

“You don’t know what’s going to happen. You just hope you have everybody prepared to advance to Eugene.”

Bucknam said he believes his team is recovered from winning the SEC title on May 14, when the Razorbacks upset Alabama by scoring 120 points to 116 for the No. 2-ranked Crimson Tide.

“It is a short turnaround,” Bucknam said. “But something about that SEC meet — and I’m not trying to sound cocky — it didn’t seem hard.

“It just seemed like we had a nice flow and the kids were dialed in. We didn’t have any personnel issues or injuries. It seemed like the meet just came to us.

“It didn’t feel like other meets where it was tense. Maybe it was because we never had the target on our back and we were going after the other schools. We weren’t picked to win. Maybe that had something to do with it.

“Only time will tell, but it feels like we have more in the tank. We seem to be up on top of the wave right now.”

Wilson, a sophomore transfer from Tennessee, won the 400 meters and 400-meter hurdles at the SEC Championships. She won’t run the 400 at the West Prelims because the semifinal and final rounds of the the 400 and 400 hurdles will be held just 30 minutes apart on June 9 at the NCAA Championships in Eugene, Ore.

Young ran 50.49 at the SEC meet to finish behind Wilson.

“Would it be great to have Britton do both and in a healthy fashion? No doubt about it,” Harter said of the 400 hurdles and 400. “But the whole idea is that the way the schedule’s designed in Eugene is for TV viewing. It’s a two-hour window and so they just crunched it all together.

“But Britton is the consummate competitor. Whatever events she’s in, she’s going to give it 100%.”

“Hopefully we can get through unscathed and advance the people we’re counting on,” Harter said.

“For us, it’s a good event to kick the meet off with,” Bucknam said. “Those hurdlers have done a phenomenal job for us, but it’s also a scary event. Things can go haywire pretty quick when you’re jumping over stuff.”