Razorbacks get another crack at Tide 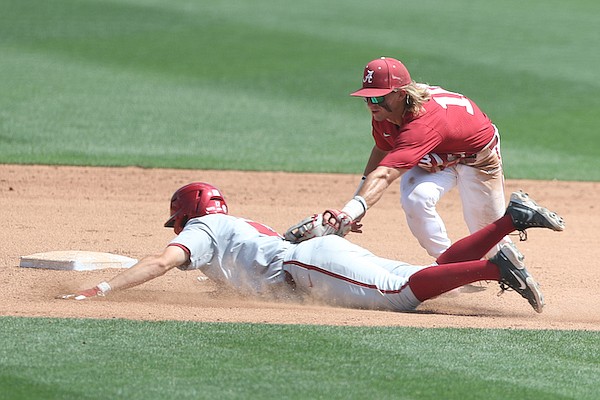 Arkansas' Brady Slavens is tagged out by Alabama shortstop Jim Jarvis during a game Saturday, May 21, 2022, in Tuscaloosa, Ala. (Photo courtesy Alabama Athletics, via SEC Media Portal)

The Arkansas baseball team is getting another shot at Alabama.

After Alabama beat the University of Arkansas two of three games last weekend in Tuscaloosa, Ala., to wrap up the regular season, the Crimson Tide beat Georgia 5-3 on Tuesday in an elimination game at the SEC Tournament in Hoover, Ala., to advance to play the No. 10 Razorbacks.

Arkansas (38-16) is scheduled to face Alabama (30-25) at 1 p.m. today at Hoover Metropolitan Stadium in the start of double-elimination play.

The Razorbacks, who had a first-round bye as the No. 3 seed after finishing with an 18-12 SEC record, originally were scheduled to play at 9:30 a.m. today, but their start time was pushed back because of rain delays Tuesday.

The Razorbacks should have plenty of motivation against Alabama after the Tide beat Arkansas 18-5 last Saturday.

It was the most runs Arkansas had allowed since a 19-8 loss to Texas in 2005 in an NCAA regional game, and it cost the Razorbacks a share of the SEC West title after they had led or been tied for the division lead since the opening series of SEC play when they swept Kentucky.

“Arkansas is a great team,” Alabama Coach Brad Bohannon said after the Tide beat Georgia. “They didn’t play their best at our place. They’re one of the best teams in the league.”

The Razorbacks might need to win some SEC Tournament games to secure one of the 16 regional host spots, considering their NCAA Ratings Percentage Index fell to No. 33 after they lost the Alabama series.

“We all have to handle it together,” Arkansas Coach Dave Van Horn said after the 13-run loss to the Tide. “We’ve got to climb out of this hole a little bit.”

Van Horn wasn’t available for comment Tuesday, and there was no announcement about Arkansas’ starting pitcher for today’s game.

Arkansas and Alabama will play in the SEC Tournament for the first time since 2011, when they split two games in Hoover. The Tide won 7-4, then the Razorbacks won 4-1.

Alabama is going for its third consecutive victory over the Razorbacks, who won last weekend’s opener 7-3 before the Tide won the second game 8-6.

Tide right fielder Andrew Pinckney went 5 for 14 against Arkansas with a home run and two doubles and drove in three runs.

“Really just taking it a pitch at a time,” Pinckney said of the approach to playing Arkansas again. “Every time, you just treat it the same way, and just come out with good at-bats and good energy and not try and do too much, and the results will take care of itself.”

The Tide, who were 12-17 in conference play during the regular season, likely need to win the SEC Tournament to extend their season and earn the conference’s automatic NCAA Tournament bid.

“You get into the SEC Tournament and the deeper you go, the better the teams are,” Bohannon said. “Everybody you play is going to be really good. Some of the teams have different strengths and weaknesses, but at this point, we just have to go play.”

Bohannon didn’t announce a starting pitcher for today, but said it likely will be Jacob McNairy (6-2), a senior right-hander.

McNairy went 5 innings in the Tide’s 8-6 victory over Arkansas and allowed 6 hits, 4 runs and 3 walks with 7 strikeouts.

Alabama’s bullpen had to go seven innings against Georgia because the game twice was delayed by rain.

Freshman right-hander Ben Hess (3-1) replaced McMillan and threw 4 1/3 scoreless innings. He held the Bulldogs to 1 hit and 1 walk and had 10 strikeouts — the most by an Alabama pitcher this season.

Brock Duffy replaced Hess and allowed two runs in the eighth inning, then Dylan Ray pitched a scoreless ninth for the Tide.

Alabama jumped out to a 5-0 lead after two innings.

“Obviously, it was a do-or-die day for us, and I’m really proud of the way they came out,” Bohannon said. “You could tell that our kids were really excited today and came out hot.

“Excited that we get to stick around for a little while.”