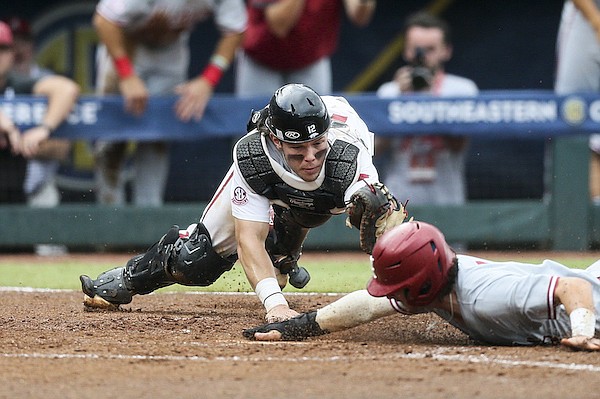 Arkansas catcher Michael Turner dives as Alabama's Caden Rose scores during an SEC Tournament game Wednesday, May 25, 2022, in Hoover, Ala.

Arkansas’ start to the postseason began Wednesday with the same result as its regular-season finale last week — a loss to Alabama in the Crimson Tide’s home state.

Alabama defeated the Razorbacks 4-3 in the first game of double-elimination play at the SEC Tournament in Hoover, Ala. It was the third time the Crimson Tide beat Arkansas during a six-day span.

The Razorbacks (38-17) lost for the seventh time in 11 games, further damaging their hopes to host an NCAA regional next week. Thought to be in good shape to host a regional at the beginning of the month, Arkansas was projected to be one of the final two teams to earn a host site by Baseball America this week, and was projected by D1Baseball not to host.

Dave Van Horn, the Razorbacks’ 20th-year head coach, did not coach Wednesday’s game. According to the team, Van Horn is in Hoover but was not feeling well.

It is to be determined when Arkansas will play again in Hoover. Rain has wreaked havoc on the tournament schedule throughout the week, including Wednesday when the first game of the day between Auburn and Kentucky was delayed by 3 hours, 15 minutes. That game was originally scheduled to be played Tuesday night.

The Arkansas-Alabama game was originally scheduled to begin at 9:30 a.m. Wednesday, but did not begin until 4:30 p.m.

Following the Razorbacks' loss, SEC officials called off games for the rest of Wednesday due to approaching thunderstorms. That left the league three games — or nearly a full day — behind schedule going into Thursday, when more rain is in the forecast in central Alabama.

At the earliest, Arkansas would play again in the late game Thursday night in Hoover against the loser of the day’s early game between Florida and Texas A&M. There is also increasing thought the SEC might change the tournament format to single elimination for the rest of the week. If that is the case, the Razorbacks would be eliminated with the loss to the Crimson Tide.

Alabama (31-25) never trailed Wednesday. Similar to the tournament opener Tuesday when the Crimson Tide scored all of their runs in the first two innings of a 5-3 victory over Georgia, Alabama jumped on Arkansas starter Will McEntire in a short start.

McEntire, who had a four-inning no decision in Tuscaloosa last Thursday, allowed 2 earned runs, 2 hits and 3 walks in 2 1/3 innings.

Alabama scored twice in the second inning when Arkansas second baseman Robert Moore threw  low trying to turn a would-be inning-ending double play with the bases loaded. The Crimson Tide extended their lead to 3-0 in the third after Caden Rose scored tagged from third base and scored on a foul out to third baseman Cayden Wallace.

Arkansas cut the deficit to 3-1 on Jalen Battles’ solo home run in the bottom of the third inning, but Alabama scored again on a two-out throwing error by Arkansas catcher Michael Turner in the fourth. Turner tried to pick off Tommy Seidl at third base, but his throw was wide of Wallace and went into left field.

The Razorbacks had multiple defensive miscues, but saved a run when right fielder Chris Lanzilli threw out Drew Williamson at home plate to end the top of the fifth inning. Williamson attempted to score from third bae after a flyout by Dominic Tamez.

The Razorbacks cut the lead to 4-3 in the sixth when Lanzilli hit a two-run home run with no outs. Arkansas out-hit Alabama 5-4, but the Razorbacks stranded six base runners.

Arkansas stranded two in the seventh inning when Brady Slavens struck out following a hit batsman and a walk with two outs. Battles singled with two outs in the ninth, but he was left at first base when Dylan Ray came out of the bullpen to strike out pinch hitter Jace Bohrofen.

Taylor, an Alabama native, struck out three in three innings.

Crimson Tide starter Jacob McNairy allowed 1 run, 3 hits and 1 walk, and struck out 3 in a 4 1/3-inning no-decision. Left hander Antoine Jean was credited with the victory with two shutout innings, and Ray earned his eighth save.

Alabama will play the winner of the Florida-Texas A&M game in the next round, but that game will not be played until sometime Friday. The Crimson Tide, who clinched a berth in the SEC Tournament with a win over Arkansas last week, likely need to win the tournament to advance to the NCAA regionals.