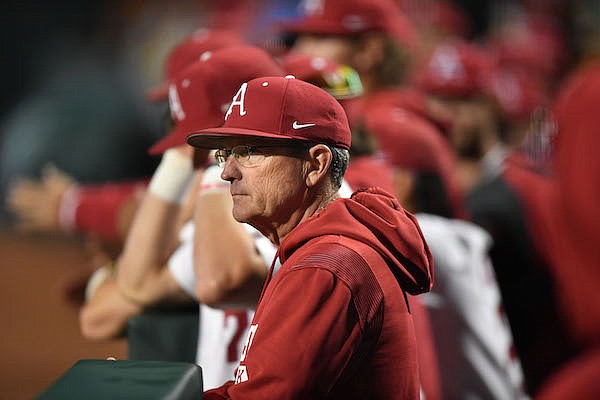 Arkansas coach Dave Van Horn is shown during a game against Missouri State on Tuesday, May 3, 2022, in Fayetteville.

Arkansas baseball coach Dave Van Horn will not coach the Razorbacks' game against Alabama on Wednesday at the SEC Tournament in Hoover, Ala.

Van Horn is at the team hotel in Hoover, according to the Razorbacks' pregame radio show. A statement from a team spokesman said Van Horn "is not feeling well, but is resting comfortably."

No other information was available.

It is believed to be the first time since 2016 that Van Horn has missed an Arkansas baseball game. He did not coach the Razorbacks' opener at Mississippi State that season so he could attend his youngest daughter's high school graduation.

An acting head coach was not announced for Wednesday's game. Assistants Nate Thompson (hitting coach) and Matt Hobbs (pitching coach) are with the team.

The Razorbacks are scheduled to play the Crimson Tide beginning at 4:30 p.m.