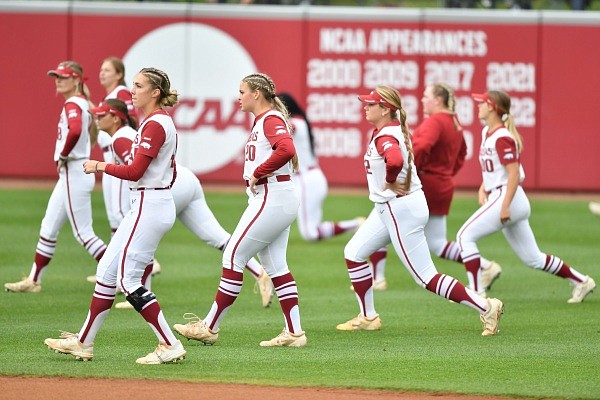 Arkansas players warm up on Thursday, May 26, 2022, ahead of the Razorbacks’ game against Texas in the Fayetteville Super Regional at Bogle Park in Fayetteville. Visit nwaonline.com/220527Daily/ for the photo gallery.

TELEVISION The game will be televised by ESPN2 and can be accessed on WatchESPN.com via the ESPN app (carrier login required).

FORECAST According to the National Weather Service, Friday night will be mostly clear with a low around 57.

NOTABLE The winner of the best-of-three-game series will advance to the Women's College World Series in Oklahoma City. Arkansas needs one more win to clinch its first appearance at the event….The Razorbacks are 28-4 at home this season and have won nine consecutive games at Bogle Park....Arkansas is hosting an NCAA Super Regional for the second consecutive season. On Thursday it improved to 1-4 in the super regional round with a 7-1 victory.…Before this series, Arkansas, the No. 4 overall seed in the NCAA Tournament, last faced the Longhorns in 2016, which was Courtney Deifel's first season with the Razorbacks....Arkansas starting catcher Taylor Ellsworth transferred from Texas, where she played in 171 games and started 162. She is hitting .349 this season with 14 home runs and 53 RBI….Chenise Delce recorded her 14th complete game of the season Thursday in Arkansas’ Game 1 win. She allowed 6 hits, 1 walk and struck out 6….Hannah Gammill went 3-for-4 with a pair of run-scoring hits. Hannah McEwen also had three hits, including a double….Longhorns three-hole hitter Bella Dayton stranded six of the team’s eight runners on base. Janae Jefferson, who hits leadoff, had two hits….The Razorbacks have outscored their opponents 33-6 in NCAA Tournament games and they are 7-0 since the SEC Tournament began....If a Game 3 is necessary, a game time and TV designation will be announced Friday night.