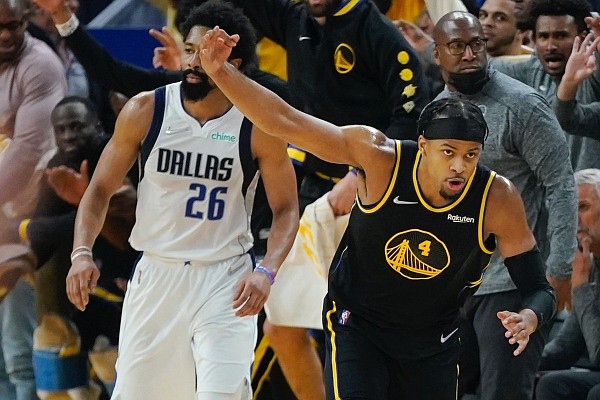 A former Arkansas basketball standout is headed to the NBA Finals.

Moses Moody, who starred for the Razorbacks as a freshman in 2020-21 and guided the program to the Elite Eight of the NCAA Tournament, and the Golden State Warriors defeated the Dallas Mavericks 120-110 on Thursday to clinch an appearance in the championship round.

It marks the second consecutive season in which Arkansas will have a former player contending for a world title. Bobby Portis won a championship with the Milwaukee Bucks in 2021.

The Warriors, going to their sixth NBA Finals in eight seasons, next week will face the winner of the Boston Celtics-Miami Heat series. The Celtics currently lead 3-2 entering Game 6 in Boston on Friday.

Moody, who had 7 points on 2 of 3 shooting, turned in an impressive sequence in the second quarter of Game 5 that helped the Warriors create separation and lead by double figures much of the second half.

With Golden State leading 47-38, the guard knocked down a fadeaway jumper from 18 feet to extend the lead to 11. Just more than 45 seconds later, Moody blocked a layup attempt by Mavericks star Luka Doncic and sparked a transition opportunity for the Warriors.

Moody drew a foul on the other end and made both free throws. Later, following a Steph Curry steal, he found Moody in the right corner for a three-pointer that pushed him to seven points and forced a Dallas timeout.

Golden State’s lead was 56-38 with four minutes left in the first half.

“Shoutout to Moses Moody, a rookie, for being ready. Enjoy that moment,” Shaquille O’Neal said on TNT’s Inside the NBA after the game. “You just made yourself some money, young fella.”

Moody played 10:36 in the victory and the Warriors outscored Dallas by four points when he was on the floor.

His seven-point outing comes after a 10-point performance in Game 4 in Dallas. Moody scored a combined 6 points on 2 of 5 shooting in the first 3 games, but he was 6 of his last 10 and 3 of 4 from three-point range to close the series.

"For a guy like Moses to come into a Western Conference Finals and play two amazing games, he's full of confidence," Curry said on TNT. "Credit to his work ethic, but it's the way that we communicate from Day 1. It pays off."