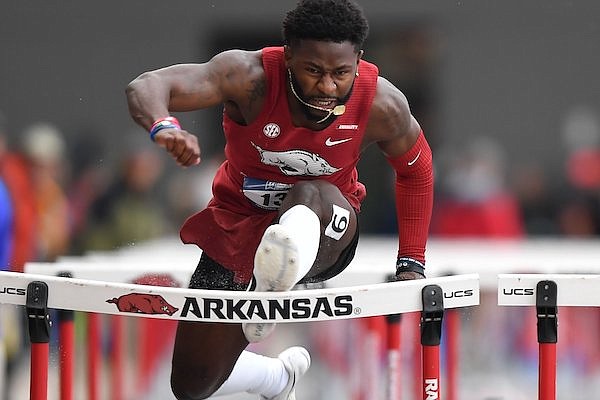 Arkansas' Matthew Lewis-Banks catches a hurdle Wednesday, May 25, 2022, in the 110-meter hurdles during the NCAA Track and Field West Preliminaries at John McDonnell Field in Fayetteville.

FAYETTEVILLE — When the opportunity to transfer from Indiana State to the University of Arkansas presented itself to hurdler Matthew Lewis-Banks, it was an easy decision.

“I just knew I wanted something better for myself, and Arkansas track and field is like Alabama football,” said Lewis-Banks, a three-time Missouri Valley Conference champion. “You can’t get any higher than that, so I couldn’t pass it up.”

Lewis-Banks, a junior from Hazel Crest, Ill., ran a personal-best 13.72 seconds in the 110-meter hurdles Wednesday night at the NCAA Track and Field West Preliminaries at Arkansas’ John McDonnell Field to advance to Friday night’s second round. His previous best was 13.78 last year.

“Transferring here and being in the SEC now, I’m with the big dogs,” Lewis-Banks said. “So every day I expect to go out there and be great.”

Lewis-Banks’ performance — along with junior Tre’Bien Gilbert winning his heat in 13.50 for the No. 3 qualifying time — was big for the Razorbacks after All-American Phillip Lemonious fell and failed to make the final.

Lemonious, a junior who took second at the SEC Championships two weeks ago when Gilbert finished third and Lewis-Banks sixth, was leading in his heat when he slipped and fell after clearing the final hurdle. Officially, he ran 15.19 as he slid across the finish line.

It was the kind of mishap that Razorbacks Coach Chris Bucknam spoke of Tuesday when he previewed the meet.

“Those hurdlers have done a phenomenal job for us, but it’s also a scary event,” Bucknam said. “Things can go haywire pretty quick when you’re jumping over stuff.”

Lemonious, a junior, finished third at the NCAA Championships last year when he ran 13.39. He bettered that mark by going 13.21 to take fourth at the Jamaican Olympic Trials.

“It’s really a tough break for Phillip and for us,” Bucknam said. “One of the best hurdlers in the country goes down.

“He was a big potential scorer for us. He’s proven it. He’s done it before. Those are precious points.”

Gilbert had no issues in advancing.

“Like Tre’Bien does, he stepped it up after what happened to Phillip,” Bucknam said. “It is what it is. We’ve just got to keep fighting.”

Bucknam said it was encouraging to see Lewis-Banks advance.

“It’s a big transition from where he came from to here,” Bucknam said. “It took him through the indoor season to get adjusted.”

Bucknam credited the hard work from assistant Doug Case, who coaches the sprinters and hurdlers, and Lewis-Banks.

“Coach Case had a lot of faith in Matthew even though the times weren’t there earlier in the year, because he’s a tremendously hard worker and dedicated and dialed in all the time,” Bucknam said. “He’s been working on his technique and getting a little bit stronger and faster and now he’s peaking at the right time.

“He’s a great addition to our program. I’m real happy for him and hope he can keep it going.”

Arkansas sophomore Patrick Kiprop and senior Amon Kemboi took third and sixth, respectively, in the 10,000 meters to advance to the NCAA Championships.

The top 12 in each event at the East and West Prelims advance. With 3 1/2 laps left in the 10,000, Arkansas senior Emmanuel Cheboson was in sixth place.

Then Cheboson was stepped out from behind by another runner and fell. The contact created a chain reaction in which five runners went down.

Bucknam filed a protest, but the results weren’t changed.

“I feel bad for Emmanuel,” Bucknam said. “He was cruising before he got stepped on. He looked great.

“Patrick and Amon made it safely and easily. I think Emmanuel would have been right there with them. Just a bad luck fall.”

Arkansas junior Ryan Brown went 25 feet, 4 1/2 inches in the long jump to take 11th and qualify for the NCAA Championships.

Razorbacks junior Ryan Brown ran a wind-aided 10.18 in the 100 meters to advance to Friday night’s second round.

Arkansas freshman Connor Washington ran 20.79 in the 200 to advance to the second round.

University of Arkansas-Little Rock sophomore sprinter Cameron Jackson, the Sun Belt Conference champion in the 100 and 200, had to withdraw from the West Prelims because of a nagging injury according to a UALR news release.

Arkansas State University sophomores Aimar Palma Simo and Bradley Jelmert both were one spot away from qualifying for the NCAA Championships. Simo finished 13th in the hammer (211-10) and Jelmert 13th in the pole vault (17-4 1/2).

The West Prelims continue today with women’s events. Field events begin at 10 a.m. with the hammer and running events at 6 with the 100 hurdles.