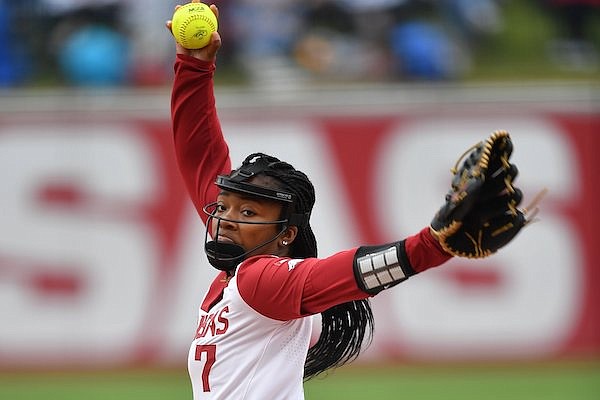 Arkansas pitcher Chenise Delce (7) follows through with a pitch Thursday, May 26, 2022, during the second inning of the Razorbacks' 7-1 win over Texas in the Fayetteville Super Regional at Bogle Park in Fayetteville.

FAYETTEVILLE — Chenise Delce was rubbing her hands together in the dugout as her University of Arkansas teammates were piling up runs Thursday night.

It wasn’t clear if she was rubbing her hands to keep them warm, or rubbing them in glee. Either would have been appropriate.

Delce shut down the Texas offense and struck out six in a complete-game effort as Arkansas claimed the first game of the NCAA Fayetteville Super Regional softball series 7-1 at Bogle Park in front an announced crowd of 3,100.

The junior right-hander worked around a fifth-inning jam that saw Texas (41-19-1) load the bases with one out. Delce said she just trusted her pitches when the Longhorns were threatening to take the lead.

“In that inning, I just had to kind of put my stuff against their stuff … and I’m really confident in my stuff,” Delce said. “I just told myself, ‘Throw it in and you’ll probably get good results.’ Really in that inning, I had to focus on hitting my spots. I feel like that’s what worked.”

With runners at second and third with one out, Arkansas (48-9) intentionally walked Texas lead-off hitter Janae Jefferson to load the bases. Delce struck out Texas No. 2 hitter Mia Scott looking for one of her six strikeouts, then got a ground ball to second to escape without allowing a run.

The win was the first in an NCAA super regional for the Razorbacks and put them one win away from the program’s first-ever trip to the Women’s College World Series in Oklahoma City next week. The teams will meet again at 5:30 p.m. Friday.

Arkansas had 12 hits and played error-free on defense. A huge defensive play early in the game by right fielder Kacie Hoffman on a ball hit deep with a runner on prevented Texas from taking the early lead.

“Their defense played well when they had to,” Texas Coach Mike White said. “They made big plays and they made big pitches, and we didn’t and that’s what we have to change. I feel like we missed some opportunities early on.

“We have to do the basic things better. But a couple of freshmen made the errors out there today for us, and we can’t go out and practice being in front of 3,000 people. Hopefully it will be something they will learn from and get over it.”

Arkansas broke out to a 3-0 lead in the bottom of the fifth. Hannah McEwen (3 for 4) led off the inning with a double off the wall in center and scored on an RBI single by Hannah Gammill, who was 3 for 4 with 2 RBI for the Razorbacks. Arkansas tacked on two more runs on a throwing error by Texas first baseman Katie Cimusz on a throw to the plate.

The 3-0 lead was plenty for Delce, but Arkansas was not done, scoring four times in the sixth inning. McEwen again got the rally started with a lead-off single and Taylor Ellsworth (2 for 3) followed with a single against her former team.

With one out, Gammill singled in McEwen and Linnie Malkin singled in pinch-runner Cally Kildow from second. Arkansas scored its final two runs on a throwing error for the 7-0 lead.

Given a huge lead, Delce nailed it down in the seventh, and helped her cause in the process. Cimusz smoked a line drive back through the circle that Delce snared for the first out of the inning.

“I forgot who hit it, but that stung,” Delce said. “It was really hard. That was scary.”

Texas avoided the shutout in the seventh, getting a bases-loaded groundout to score Lauren Burke, who had doubled, from third.

Jefferson was 2 for 3 for Texas, including a double to lead off the game. Burke was also 2 for 3.