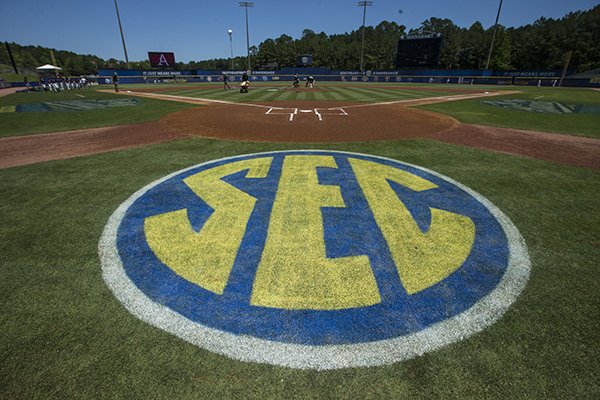 An SEC logo is shown behind home plate prior to an SEC Tournament game between Arkansas and Ole Miss on Wednesday, May 22, 2019, in Hoover, Ala.

Arkansas will not play a baseball game Thursday at the SEC Tournament in Hoover, Ala.

Arkansas is tentatively scheduled to play the loser of the game Friday at 9:30 a.m. in an elimination game. Whether that game begins on time depends on whether three games are completed Thursday.

If Arkansas wins Friday morning's game, the Razorbacks would be scheduled to play again Saturday at 9:30 a.m., and could play a second game later Saturday in the tournament semifinals.

The tournament has been delayed since Arkansas' 4-3 loss to Alabama on Wednesday night. It was already three games behind schedule going into Thursday, which was to be the second of three days of double-elimination play. Only the Razorbacks and Crimson Tide have completed a double-elimination game.

Games have been pushed back on each day of the tournament, which began Tuesday. SEC officials have made schedule modifications that include four games Friday and Saturday, when only two games were originally scheduled to be played.

The forecast in Hoover is clear for the final three scheduled days of the tournament. The championship game is scheduled to be played Sunday.

NCAA Tournament brackets will be unveiled Monday at 11 a.m.