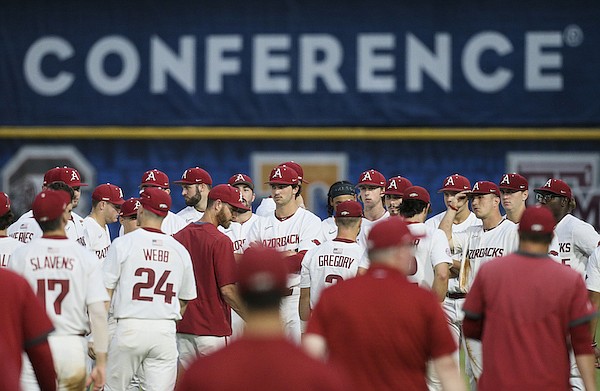 Arkansas players gather after a 4-3 loss to Alabama at the SEC Tournament on Wednesday, May 25, 2022, in Hoover, Ala.

HOOVER, Ala. — University of Arkansas Coach Dave Van Horn was not available for the Razorbacks’ 4-3 loss to Alabama in its SEC Tournament opener Wednesday.

Van Horn was not feeling well and stayed behind at the Razorbacks’ hotel,

During the ninth inning of the Kentucky-Auburn game that preceded the Razorbacks, Van Horn’s absence was announced during the pregame radio broadcast by play-by-play announcer Phil Elson.

“He is not feeling well, but is resting comfortably,” the UA said in a statement announcing Van Horn’s absence.

Hobbs conducted the SEC Network’s in-game interview before the top of the fifth inning, with the Razorbacks trailing 4-1.

“Any time you take a Hall of Famer out of the dugout, it’s going to affect you,” Hobbs said regarding Van Horn’s absence.

Van Horn, in his 20th season with the Razorbacks, is believed not to have missed a game since 2016, when he did not coach the opening game in a series against Mississippi State in order to attend his daughter Mariel’s high school graduation.

“First thing I’ll say is it was really weird looking over at the Arkansas dugout and not seeing Coach Van Horn, so I hope he’s feeling better,” Bohannon said. “He’s one of the G.O.A.T.s as far as I’m concerned.”

The Razorbacks employed some lineup changes for the opener, looking for the combination that will lead to their best run production.

The Arkansas order, with number of games at that spot in parenthesis: Cayden Wallace (42), Brady Slavens (15), Chris Lanzilli (11), Michael Turner (14), Robert Moore (16), Braydon Webb (15), Peyton Stovall (9), Jalen Battles (19) and Zack Gregory (33). Each of the players in the lineup have batted in that position more than any other player on the team with the exception of Lanzilli in the third spot (Turner, 20), Turner at cleanup (Lanzilli, 21) and Stovall in the seven spot (Battles, 16).

However, Hobbs added he would be surprised if the starter did not come from the trio of Connor Noland, Hagen Smith and Jaxon Wiggins, who had started in that order every weekend until the final regular season series at Alabama last week.

Auburn first baseman Sonny DiChiara, the co-SEC player of the year, was 5 for 38 (.132) in 13 games in the month of May, with 4 home runs and 7 RBI prior to his game-tying solo home run in the eighth inning of Wednesday’s 3-1 loss to Kentucky.

Included in that total was his 2-for-10 showing with 2 home runs and 2 RBI in the Tigers’ series loss at home to Arkansas from May 6-8.

The Birmingham, Ala., suburb of Hoover has been inundated with rain the first couple of days of the SEC Tournament.

Tuesday’s delays included a 37-minute stretch prior to the tournament opener, and a lengthy delay during Alabama’s 5-3 win over Georgia.

Late in the Alabama-Arkansas game, the SEC announced that due to projected incoming thunderstorms, the rest of the day’s slate would not be played.

Vanderbilt’s streak of 11 consecutive seasons with a .500 record or better in SEC play came to an end with the Commodores’ 14-16 mark following a home sweep at the hands of LSU last weekend.

The team with the next-longest streak of finishing with a .500 or better record: Arkansas, now at four seasons in a row.

The Auburn-Kentucky and Alabama-Arkansas games on Wednesday were both repeats of regular season-ending series.

Kentucky dropped two of three to the Tigers before notching a 3-1 win Wednesday.

Alabama won two of three at home against the Hogs then dealt them a 4-3 loss Wednesday.

Kentucky second baseman Daniel Harris IV had a somewhat embarrassing play in the fourth inning against Auburn on Wednesday. Harris flared a would-be single into right field to open the inning.

However, Auburn right fielder Bobby Peirce, who was playing very shallow, charged the ball and threw a strike to first baseman Sonny DiChiara to beat Harris’ head-first slide to the bag. The call by umpire Eddie Newsom was reviewed and it stood.

The play ended up being a potential run-saver for Auburn, as the next two Wildcats reached in a one-run inning.

The only home runs through three-plus tournament games had been hit by Georgia’s Conner Tate and Parks Harber against Alabama in the opener, but that was prior to Sonny DiChiara’s big blast over the left field fence in the eighth inning against Kentucky.

The first 44 hits of the tournament consisted of 8 doubles, 2 home runs and 37 singles.

Kentucky shortstop Ryan Ritter made a strong play on a liner the left the bat of Auburn’s Bobby Peirce with 110 mph exit velocity in the sixth inning.

Jumped to his full extent to get a glove on the hot shot. The ball came loose but it dropped within an arm’s length and Ritter was able to easily snag it after landing.

SEC umpires, rigged up with ear pieces and microphones, are remaining on the field during replay reviews. The set up streamlines the review process, which takes place with a crew on site at the Hoover Met.

On one occasion during the Kentucky-Auburn game, the home plate umpire Damien Beal and crew chief Eddie Newsom briefly conferred behind home plate to confirm a call after Newsom’s ear piece malfunctioned.