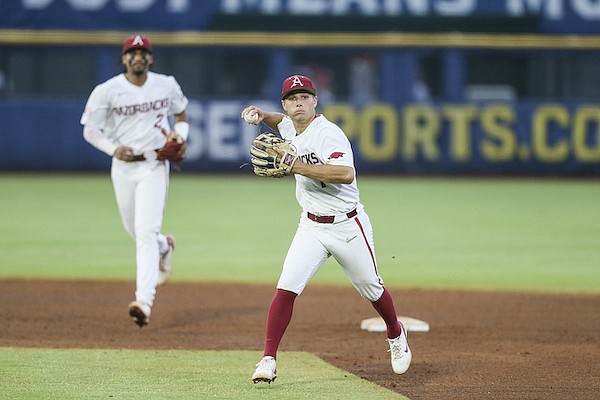 Arkansas second baseman Robert Moore throws during an SEC Tournament game against Alabama on Wednesday, May 25, 2022, in Hoover, Ala.

HOOVER, Ala. — Defense has been a strength virtually all season for the University of Arkansas baseball team.

Just not in the past week.

Following a similar script to how they lost a series at Alabama last weekend, the Razorbacks had defensive bungles in three straight innings and fell 4-3 to the Crimson Tide on Wednesday at the SEC Tournament.

Alabama (30-25) did not drive in a run with a hit and scored all its runs in irregular fashion to send the No. 10 Razorbacks (38-17) to a third consecutive loss for the first time this season.

“We have guys that are unbelievable at baseball and we just need to get out of our own heads and play with confidence,” said Arkansas outfielder Chris Lanzilli, whose two-run home run in the sixth inning pulled the Razorbacks within a run.

The Razorbacks played without Coach Dave Van Horn, who was out with an undisclosed illness and spent the game at the team hotel.

Arkansas will face the loser of the Florida vs. Texas A&M game, which was postponed from Wednesday night to 9:30 a.m. today. However, because the tournament has been so impacted by rain and weather delays it is not certain the Razorbacks will return to action today or if the double-elimination format will be scrapped.

Alabama, which has won two games in the tournament for the second consecutive year, will play the winner of the Gators vs. Aggies.

The Razorbacks entered the game with a .982 fielding percentage for the season, tied for second in the conference. But misplays and bad throws handed over runs to the Tide in three consecutive innings, three of them to batters who reached on walks.

“We didn’t play very good defense at the beginning of the game, and they took advantage,” Arkansas pitching coach Matt Hobbs said. “So you’ve got to give a heck of a lot of credit to Coach [Brad] Bohannon and all those guys over there with Alabama.

“They played really clean baseball. Their pitchers threw strikes, and they took advantage of our mistakes early.”

Arkansas starter Will McEntire (1-2) allowed two walks and a single with one out in the second inning, but induced a potential double-play ground ball from Tommy Seidl for a chance to escape with no damage. Shortstop Jalen Battles fielded the grounder and flipped to Robert Moore for the force at second, but Moore’s relay short-hopped first baseman Peyton Stovall and he couldn’t make the scoop.

Dominic Tamez scored and Zane Denton raced all the way in from second base to make it 2-0 on Moore’s second error of the season.

Alabama’s run in the third was purely a gift.

Caden Rose walked to lead off the inning and moved to second on a one-out wild pitch. McEntire struck out Andrew Pinckney, but catcher Michael Turner did not catch the third strike. He scooped the loose ball but missed on an attempt to tag Pinckney at the plate. As Pinckney raced to first, Rose lurched too far off the second base bag creeping toward third.

Turner fired to third baseman Cayden Wallace, who started a run-down, but McEntire’s tag of Rose at third base on a head-first slide was up in his chest and Rose got his hand to the bag safely as Pinckney scrambled into second.

“We knew they were going to be aggressive. They’ve been aggressive,” Hobbs said. “If we get the tag on that base runner, we don’t have that rundown situation. Kind of a goofy play there.”

Drew Williamson launched a foul pop down the track on the left-field side and Wallace made a running catch with his back to the plate. Rose’s head first slide to the plate beat Wallace’s throw to make it 3-0.

“I don’t think we’re the team that can just sit up there and hit home runs all day long, so we kind of have to find a way to score runs when we can, move guys up, run and steal,” Williamson said. “I’m not the best at that, but I do what I can. And at the end of the day, it worked out today.”

Battles’ ninth home run of the season in the bottom of the third off Jacob McNairy made it 3-1, but the Hogs were back in a giving spirit in the next inning.

With two outs, Zack Morris walked Seidl on four pitches. Morris got ahead of nine-hole hitter Bryce Eblin 0-2, but the second baseman hit a flair single to right field, chasing Seidl to third. Rose walked to load the bases.

On a pitch to William Hamiter, Turner spied Seidl cheating too far off third base and fired behind him. The throw went wide of Wallace and into left field, allowing Seidl to hop up and score on the Razorbacks’ second error of the game.

That made the second time the Crimson Tide could have had an over-aggressive runner thrown out at third base, but both players scored.

“Fortunately Arkansas helped us a little bit early,” Bohannon said. “To our guys’ credit, we took advantage of some mistakes that they made.”

The Razorbacks got their first two batters on base in the fifth on Braydon Webb’s hit by pitch and Stovall’s walk, but failed to score.

Lanzilli’s two-run home run, his seventh, came off Jake Leger in the sixth and cut Arkansas’ deficit to 4-3.

However, the Razorbacks got only three base runners in the final three innings against Landon Green and Antoine Jean (5-1), and closer Dylan Ray came on to record the final out for his eighth save.