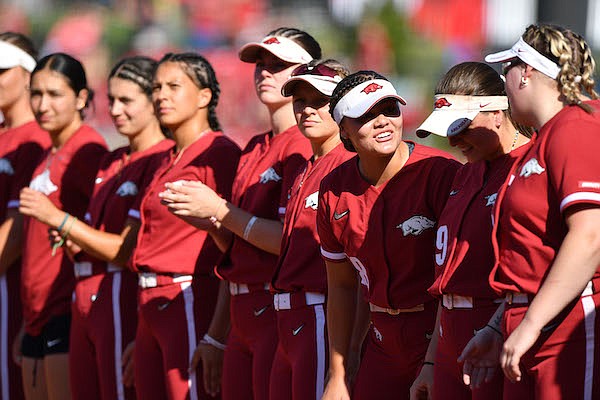 Arkansas players line up prior to an NCAA Tournament game against Texas on Friday, May 27, 2022, in Fayetteville.

TELEVISION The game will be televised by ESPN and can be accessed on WatchESPN.com via the ESPN app (carrier login required).

FORECAST According to the National Weather Service, Saturday will be sunny with a high near 82 in Fayetteville.

NOTABLE The winner of Game 3 will advance to the Women's College World Series in Oklahoma City. Arkansas is seeking its first appearance at the event. Texas is aiming for its sixth berth and first since 2013….The Razorbacks are 28-5 at home this season and had won nine consecutive games at Bogle Park prior to Friday’s loss….Texas pitcher Hailey Dolcini threw 129 pitches in a complete-game effort Friday in which she gave up 5 hits and 1 earned run. Dolcini threw 105 pitches Thursday. Mary Haff took the loss for the Razorbacks, allowing 3 earned runs on 5 hits in 2 1/3 innings pitched….The Longhorns’ opponents have scored two or fewer runs in five of six games in the NCAA Tournament….Arkansas has not lost a series this season. The Razorbacks are 5-0 in rubber match games, defeating Louisville, LSU, Ole Miss, Kentucky and Texas A&M….Arkansas’ one run in Game 2 was its fewest since being shutout 2-0 at Ole Miss on April 1….The Razorbacks’ offense is led by Danielle Gibson, who is hitting .441 this season with 70 RBI. Linnie Malkin is second with 68 RBI….Texas' Mary Iakopo has hit a team-best 10 home runs and has 53 RBI to go with a .335 average. Katie Cimusz, who homered in Game 2, is the Longhorn’s No. 2 home run hitter with nine in 52 games. Janae Jefferson, who also hit a home run Friday, has a team-high 85 hits and .429 average.