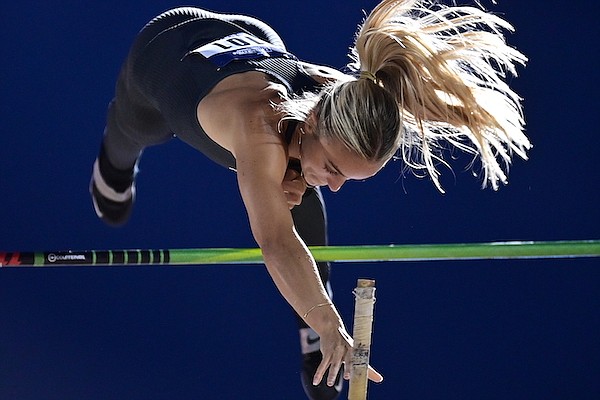 Arkansas pole vaulter Amanda Fassold competes during the NCAA West Preliminaries on Thursday, May 26, 2022, in Fayetteville.

FAYETTEVILLE — Amanda Fassold is going home to compete at the NCAA Outdoor Track and Field Championships.

Fassold is from Hillsboro, Ore., 112 miles north of Eugene.

“I’m so excited to go back home,” said Fassold, who won the SEC title two weeks ago after clearing a personal-best 14-9. “That was the main goal, to make it back home for nationals.”

Fassold, who previously competed in the NCAA Division II Championships two years ago when she was at Asuza (Calif.) Pacific, said she will be competing in Eugene for the first time since being a long jumper at Glencoe High School.

“I think I did what I needed to do,” Fassold said of Thursday night’s competition. “You just have to keep going and figure it out to make it in.”

Fassold was among three Razorbacks who finished in the top 12 to advance to the NCAA Championships along with junior Bailee McCorkle and sophomore Mackenzie Hayward, who both cleared 13-5 3/4. It was a season-best mark for McCorkle, who is from Greenwood.

“This outdoor season has been a challenge for sure,” McCorkle said. ‘I’ve been in kind of a slump.

“But I’ve been coming to practice every day working as hard as I can to get to this point, so it feels good.”

Arkansas will have three vaulters at the NCAA Championships for the seventh time since 2009.

Razorbacks junior Lauren Gregory took third in the 10,000 meters in 33 minutes, 37.79 seconds to also advance to the NCAA Championships.

“It was kind of an exercise for Lauren,” Arkansas women’s Coach Lance Harter said. “She went along for the ride and kept herself out of trouble and advanced.”

Arkansas sophomore Britton Wilson, the national leader in the 400-meter hurdles, won her heat in 57.03 to automatically advance to Saturday night’s second round. She won the SEC title in 53.67 two weeks ago to break her own school record.

Wilson was among nine Razorbacks who advanced in seven events.

“It felt really good,” Gear said. “I was lucky I had the girl from Colorado right beside me and make it an honest pace and not be entirely a sit-and-kick race.

“I liked it being cool,” Gear said. “It’s kind of springy and fresh. As a spectator I don’t think I’d like it, but when out there racing, it felt great.”

“We’re in a very positive place right now,” Harter said. “We’re going to have to come back on Saturday and fight again. The challenge just continues to escalate each and every round.”

Fassold said she didn’t initially have Arkansas on her list of transfer options until she heard from Razorbacks assistant Bryan Compton, who coaches the vaulters.

“I honestly didn’t think Arkansas was in the picture, because I didn’t look at myself like I could be that good,” Fassold said. “Because Arkansas pole vault is crazy insane.

“But once Coach Compton reached out to me I was like, ‘Oh my gosh, I could go to Arkansas.’ ”

Compton is known for being a demanding coach.

“I love it,” Fassold said of training with Compton. “Him and I work really well together.

“You can either handle it or you can’t in my opinion. It’s really not that hard. You’ve just got to be able to have some thick skin and take care of your workouts.

“It’s been amazing, and it’s exciting to see what we can continue to do. We’re not done yet.”

Fassold didn’t begin pole vaulting until the summer before her freshman year of college.

“Thank God she went to the vault,” Harter said. “Because she’s going to be one the great ones Bryan has been able to produce.”

“Oregon’s pole vault program isn’t really isn’t developed as much as Arkansas’ is,” she said. “Arkansas has a huge legacy with pole vaulting.”

Only women competed at the event Thursday. The men return today.