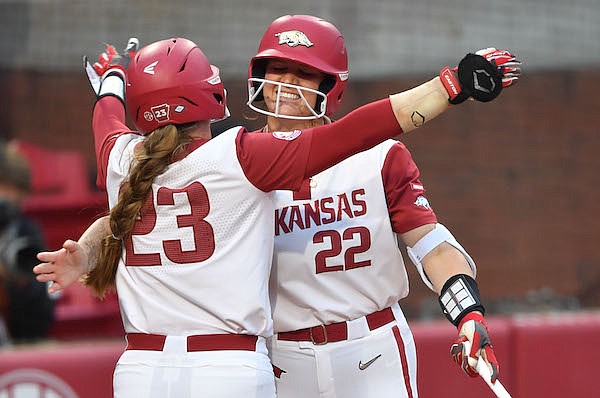 Arkansas left fielder Hannah McEwen (23) celebrates Thursday, May 26, 2022, with designated hitter Linnie Malkin after scoring the Razorbacks’ first run on a single by third baseman Hannah Gammill during the fifth inning of the Razorbacks’ 7-1 win over Texas in the Fayetteville Super Regional at Bogle Park in Fayetteville.

FAYETTEVILLE — In a game where both the University of Arkansas and Texas had no problem putting runners on base early, neither team could manage to bring runners across the plate through four innings at the NCAA Fayetteville Super Regional.

It appeared Texas might be the first team to break through the scoreless struggle when Arkansas issued an intentional walk to Longhorns’ star Janae Jefferson to load the bases with one out in the fifth inning. Arkansas pitcher Chenise Delce retired the next two batters to end the scoring threat, bringing most of the 3,100 fans Bogle Park to their feet.

What ensued in the bottom of the frame swung momentum completely in favor of the home team.

The sophomore from Beebe came through with a single to left field, allowing McEwen to score, and broke the 0-0 tie. Arkansas had stranded seven runners before Gammill’s RBI.

“I do feel like with our offense, it’s just a matter of time,” Arkansas Coach Courtney Deifel said. “I didn’t realize this, but I think they were at 100 pitches in like the fourth thinning. And that’s a lot. You’re seeing a lot of pitches. You’re sharing that information and you just saw our offense just have better at-bats each time someone dug in.”

Linnie Malkin followed Gammill’s at-bat with a base hit to center field, which loaded the bases for Kacie Hoffmann. The freshman sent a chopper to first base, but an errant throw and a missed catch allowed two runs to score for Arkansas. The error brought the score to 3-0 and flipped the game.

“I would prefer it be a little sooner,” Deifel said of her team jumping ahead. “But I ultimately don’t care as long as it happens. And you just feel like it’s going to happen with this team.”

Arkansas followed with a four-run sixth inning, riding the wave of momentum.

“I have a lot of confidence in this team,” Deifel said. “And I just felt like we were in control in the game....I think we would always counter how they threatened. I just have a ton of belief in this team coming through.”

The win began with the fifth inning change of momentum, and put the Razorbacks within one victory of the program’s first Women’s College World Series appearance.

It’s been a season of firsts for Arkansas softball.

Another was added to that list Thursday night — the first NCAA super regional win in program history. The Razorbacks were previously 0-4 in such games, getting swept in 2018 (Oklahoma) and 2021 (Arizona).

Arkansas Coach Courtney Deifel said her team is enjoying the win, but its mission is yet to be accomplished.

“It’s nice to be 1-0 going into tomorrow,” Deifel said. “But I don’t think we are getting bigger than that. We’ve been in the position before in the SEC where we’ve lost the first one, then won the next two. We know what's at stake for tomorrow and we’re just going to focus on getting one more.”

When watching the Spokane (Wash.) Regional final between Washington and Texas to determine who Arkansas would face in the NCAA Fayetteville Super Regional, one Razorback was paying extra attention,

Catcher Taylor Ellsworth, who transferred in the offseason from Texas where she played in 171 games and started 162, said she had a gut feeling she’d face her former team.

“I thought I wouldn’t care (who won), but then my stomach kind of dropped when it happened,” Ellsworth said earlier in the week. “My phone was just blowing up. The softball world is crazy. There is a softball god and they always find a way to do it.”

Ellsworth got the best of the Longhorns in Game 1, going 2 for at the plate to help her team get the win.

Another Big Sixth For Hogs

Sixth innings have been kind to the Razorbacks of late.

In back-to-back days against Oregon in the regional finals, Arkansas plated six runs in the sixth. While the Hogs didn’t quite reach that mark again Thursday, they still lit up the scoring column in the sixth.

Arkansas scored four runs against the Longhorns, capitalizing on a handful of Texas errors. The Razorbacks first scored in the sixth when Hannah Gammill shot an RBI single to right field to score Hannah McEwen. Linnie Malkin followed in the next at-bat with a single down the left field line to bring home pinch runner Cally Kildow.

That’s when things got sloppy again for Texas. The Longhorns committed their second error of the night with Hoffmann at the plate. A grounder to the third was mishandled, which allowed Malkin and Kramer to score, and made the score 7-0 in favor of Arkansas.

While Texas’ starting pitcher Hailey Dolcini took the circle for the Longhorns at Bogle Park, her sister was competing just down the road.

The Longhorns honored victims of Tuesday’s shooting at Robb Elementary School in Uvalde, Texas, by wearing commemorative ribbons in their hair, matching the elementary school’s colors.

The University of Texas campus in Austin is approximately 142 miles from Uvalde where 19 students and 2 faculty died in the mass shooting.