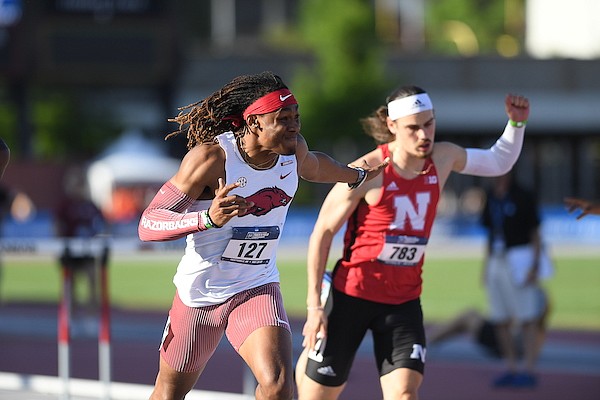 Tre'Bien Gilbert (front) runs the 110 hurdles during the NCAA West Preliminaries on Friday, May 27, 2022, in Fayetteville.

FAYETTEVILLE — University of Arkansas junior Tre’Bien Gilbert was a little slow getting out of the starting blocks in his two 110-meter hurdle races at the NCAA Track and West Preliminaries this week.

Gilbert understandably was being careful after false-starting in the second round of last year’s West Prelims and being disqualified.

“I was still trying to recover from last year, because I really didn’t want to do that again,” Gilbert said. “But me and Coach [Doug] Case have focused on being patient and not panicking in between the hurdles.

“We like to say that every hurdle is in the race, so if the first two aren’t as good, you’ve still got eight more. I’m more of a back-end hurdler, anyway, so that’s when I really started taking over.”

Gilbert finished strong and matched his career-best of 13.41 seconds Friday night at John McDonnell Field to win the hurdles and automatically advance to the NCAA Championships held June 8-11 in Eugene, Ore.

It’s the first time Gilbert has advanced to the NCAA Outdoor meet.

“I’ve worked really hard to get back to this position, especially after last year,” he said. “That weighed heavy on me.

“But I know this is only part of the work. There’s still so much to do at nationals.”

The top 12 finishers in each event at the West Prelims qualified for nationals, and Gilbert was one of two Razorbacks to advance in the 110 hurdles along with Matthew Lewis-Banks.

Arkansas junior Phillip Lemonious, who finished third in the 110 hurdles at last year’s NCAA Championships, fell going over the last hurdle in Wednesday night’s first round and failed to advance.

“It was an outstanding performance by Tre’Bien,” Razorbacks Coach Chris Bucknam said. “He knows he’s the lead guy now.

“I’m just really proud of him, and I’m proud of his focus. He’s dialed in and wants to be as good as he can be. He can’t wait to get out and race.”

Gilbert was as happy for Lewis-Banks advancing as for himself.

“I’m ecstatic for Matty,” Gilbert said. “After Phillip went down, that was a big hit on us, so for me and Matty to both get in, that means a lot.”

Arkansas senior Amon Kemboi advanced in the 5,000 — running 13:38.92 for third in his heat and 11th overall — after qualifying in the 10,000 on Wednesday night. He ran 56.5 seconds on the final lap to make sure he got a top three spot to automatically advance.

“Amon’s a stud,” Bucknam said. “You saw how patient he was on that last lap, where there were a lot of guys still right in it.

“He was confident in his own ability and didn’t get anxious. You could see his savviness and his experience. He made the move at the right time.

“It opened up for him, and he was able to scoot out and have a nice finish.”

Arkansas State University senior Bennett Pascoe, from Conway, advanced in the 3,000-meter steeplechase by running 8:39.46 to take second in his heat and 10th overall.

“These big meets are a whole other animal, so it’s hard to replicate that during the season,” Pascoe said. “But after last year, I knew I belonged.

Arkansas junior Andrew Kibet, the SEC steeplechase champion, set a torrid early pace in Friday night’s race to open up a huge lead, but he gradually faded and finished 41st in 9:10.70.

“I didn’t know how fast I was going until I started falling off,” Kibet said. “It didn’t go as planned. I just died at the end.”

Arkansas senior Roman Turner caught a tough break in the 100 when he tied for 12th with Texas A&M sophomore Devon Achane — who also plays running back for the Aggies — but didn’t advance.

Turner and Achane both finished fifth in their heats and ran 10.117, though Turner’s time was run with a 0.6 tailwind — under the legal limit of 2.0 meters per second for record purposes — and Achane ran with a 2.3 wind.

Officials discussed the option of having Turner and Achane compete in a run-off race, but ultimately went by the rulebook, which states the tiebreaker goes to the athlete who had the fastest qualifying time on the season coming into the meet.

Achane advanced thanks to his qualifying time of 10.12 compared to Turner’s 10.31.

“They go to season-best time? That doesn’t make any sense,” Bucknam said of how it was determined Achance advanced instead of Turner. “I thought this was supposed to be head-to-head competition. I don’t understand it.”

The Razorbacks had a mishap in the 400 relay when they failed to finish after Owens-Delerme — running the third leg — took off quickly and didn’t get the baton from Connor Washington.

Lemonious, waiting to run the relay anchor leg, fell to his knees when he saw the baton wasn’t exchanged.

“I think we were right in that race,” Bucknam said. “I think it was a qualifying team, but that was only second time those guys have run in the order.”

Friday’s events concluded the men’s portion of the West Prelims with the women’s events continuing today.

Gilbert said after seeing what happened on the 400 relay, it gave him extra motivation for the hurdles to make sure he advanced

“It’s going to be fast in Eugene, but I turn it up when I’m around some good people, some dogs,” Gilbert said. “We’re all dogs out there, so I think I can go win it.”