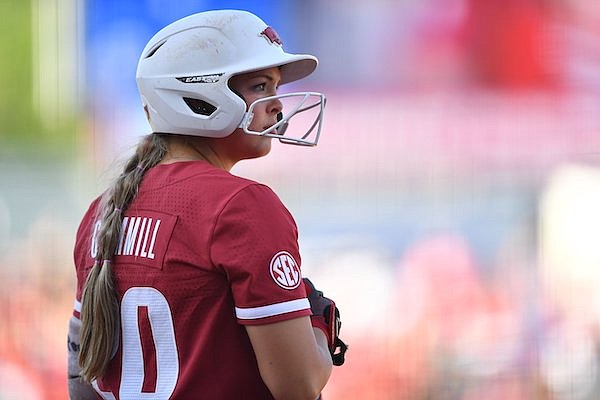 Arkansas third baseman Hannah Gammill watches Friday, May 27, 2022, from outside the batter's box during the Razorbacks' 3-1 loss to Texas in the NCAA Fayetteville Super Regional at Bogle Park.

FAYETTEVILLE — During the third inning of Friday’s game at the NCAA Fayetteville Super Regional, Arkansas’ Danielle Gibson sent a two-out single to first base to give the Razorbacks a 1-0 lead with runners on the corners.

The hit put Bogle Park into a frenzy, with the home crowd hungry for more runs. That’s when Longhorns ace Hailey Dolcini entered what would be a 20-pitch battle with Arkansas’ Hannah Gammill.

After seeing 15 consecutive pitches fouled off, Dolcini won the contest. However, it did not come without help.

Gammill rocketed a ball up the middle. Texas second baseman Janae Jefferson made a diving stop and tagged her base to get the inning’s final out.

“If I could clone her, I would,” Texas Coach Mike White said. “We’ve been fortunate enough to have her for five years. … She knows her place. She had that sixth sense of being in the right place on that ground ball that was up the middle. Right place, right time.”

While still on the ground Jefferson pointed at herself, then back at her pitcher, as if to say, “I have your back.”

“I just whispered to her, ‘Throw this pitch outside and I got you up the middle,’ ” Jefferson said of the play. “So that’s exactly what happened. It was a hard shot. I literally just reacted to the ball and caught it. I feel like that kind of suck the energy out of the whole stadium, which we needed.”

“I think that at-bat with Hannah Gammill was the momentum shift,” Deifel said. “They got back in the dugout, and they were fighting for their pitcher.”

In the bottom of the inning, the Longhorns continued to ride the wave of momentum. Leadoff hitter Katie Cimusz sent the series’ first home run over the left field wall, knotting the game 1-1.

Jefferson followed and launched a solo home run to put Texas ahead 2-1. It was the first deficit Arkansas faced since the first inning of its May 13 win over Florida in the SEC Tournament semifinals.

“You know, when someone makes a great play, you want them up to have the next at-bat in the next inning,” White said. “And that’s exactly what Janae did. She had the home run for us that inning, which was great.”

It was all the Longhorns would need. Dolcini kept the Razorbacks off the board the final four innings to take the victory and force today’s Game 3.

It’s the first time Arkansas will play in an elimination game this season. Friday’s game was the second win-or-go-home matchup the Longhorns have played. Texas also faced Washington in an elimination battle during the NCAA Seattle Regional on Sunday night.

Arkansas first baseman Danielle Gibson said the Razorbacks have bounced back from losses before.

Heading into Friday’s game, Arkansas was 7-0 in the postseason. The Razorbacks swept competition at the SEC Tournament before outscoring opponents by a combined 33-6 during a four-game NCAA Tournament stretch.

“This team wants it.” Arkansas Coach Courtney Deifel said. “What they’ve really well is control their emotions, and we just lost sight of that today."

Of the 21 Razorback outs in the loss, 10 were fly outs, something Arkansas Coach Courtney Deifel said she wasn’t pleased with.

“We had a lot of lazy fly balls today … just didn’t really square it up. That’s being off time, it’s stretching zone, all that’s connected.”

“The good thing about fly balls, they don’t take bad hops,” he said.

The Texas softball team has traveled many miles in the past week, playing at Washington and Arkansas.

Bogle Park recorded its second-largest attendance figure Friday with an announced crowd of 3,170.