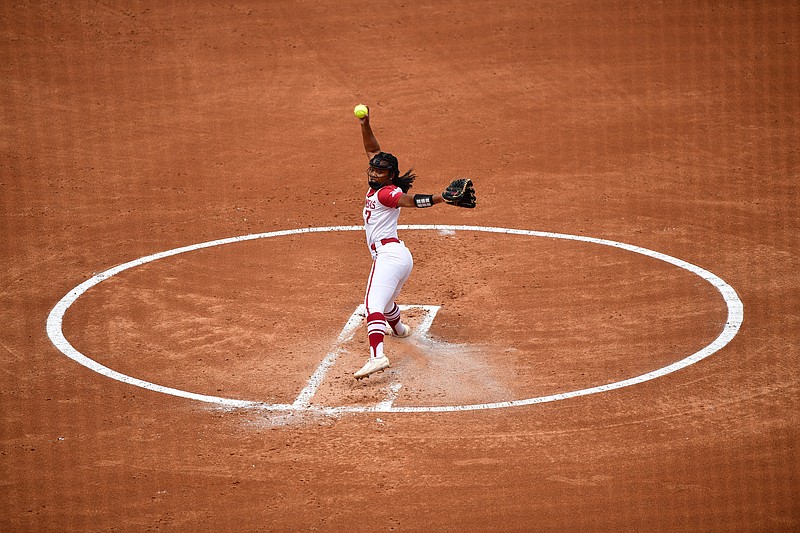 FAYETTEVILLE — Texas scored three runs in the top of the sixth inning to break a scoreless tie and the Longhorns ended the most successful softball season in Arkansas history with a 3-0 victory Saturday at Bogle Park.

The Razorbacks (48-11) lost back-to-back games after they defeated Texas 7-1 in the series opener Thursday. The Longhorns won 3-1 on Friday to even the series.

Arkansas had not lost consecutive games since a home super regional last season when Arizona swept at Bogle Park. The Razorbacks lost in the super regional round for the third time since 2018 and failed to advance to their first Women's College World Series.

Texas (43-19-1) is in the Women's College World Series for the sixth time in program history, and first time since 2013. The Longhorns will play UCLA or Duke next week in Oklahoma City.

Freshman right hander Sophia Simpson pitched seven shutout innings one day after Texas senior Hailey Dolcini held Arkansas to one run. The Razorbacks were shut out for the first time since a 2-0 loss at Ole Miss on April 1.

The Longhorns led off the sixth inning with four consecutive hits against SEC pitcher of the year Chenise Delce. Alyssa Washington's two-run double scored Janae Jefferson and Mia Scott to give Texas a 2-0 lead, and after advancing on a passed ball, Washington scored on an RBI single by Mary Iakopo to increase the lead to 3-0.

Arkansas put its first two runners on base in the bottom of the sixth and seventh innings, but failed to score both times. Kacie Hoffman grounded into a double play to end the sixth inning and Taylor Ellsworth, a transfer from Texas, flied out to left field to strand runners on the corners in the seventh.

Arkansas' best chance to score against Simpson came in the second inning when Danielle Gibson and Hannah Gammill each singled and advanced to second and third base with no outs. But Linnie Malkin and Hoffman struck out, and Audrie LaValley flied out to end the inning.

Delce allowed 3 runs on 7 hits and struck out 8 in a 6-inning start. She was replaced by Mary Haff after the Longhorns' first two hitters reached in the seventh inning on back-to-back singles. Jefferson lined into a double play at second base and Haff struck out Scott to keep the deficit at three runs.

LaValley singled to lead off the bottom of the seventh and pinch hitter Rylin Hedgecock followed with a walk to bring the top of the order to the plate. SEC player of the year KB Sides hit into a fielder's choice for the first out and Hannah McEwen popped up to third base to bring Ellsworth to the plate.

Ellsworth fouled off three consecutive pitches. On the sixth pitch of the at-bat she pulled a pitch with solid contact, but left fielder Lauren Burke made a running catch in front of the wall.

Texas advanced to Oklahoma City while playing all of its games away from home. The Longhorns won a regional at Washington last week.

Arkansas, which won the SEC regular-season and tournament championships, was the No. 4 overall seed in the NCAA Tournament.