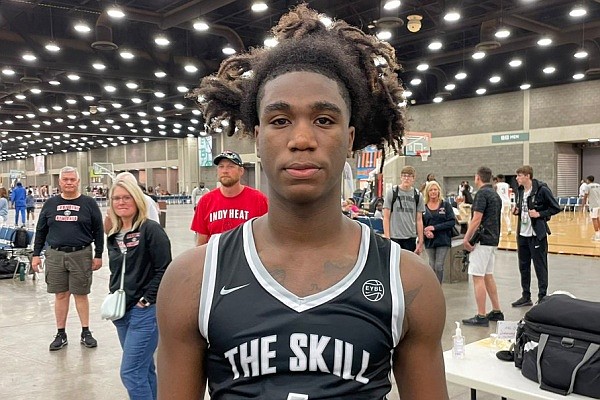 LOUISVILLE, Ky. — Arkansas’ communication and success on the recruiting front has ESPN 5-star prospect Marvel Allen intrigued by the Razorbacks.

He stays in touch with Coach Eric Musselman and recruiting coordinator Ronnie Brewer.

“Coach Brewer has been keeping in contact with me the most,” Allen said. “Coach Musselman texts me daily, so it’s been good. I know they have a good 2022 class. They’re one of my options, so I’m just taking my time and waiting for the offer and then it’s a possibility I can go there if the situation is right.”

Allen, 6-4, 198 pounds, played at Ft. Lauderdale (Fla.) Calvary Christian, last season but will play his senior season at Montverde Academy. He has more than 20 offers from schools such as Florida, Clemson, Georgetown, Kansas, Michigan, Ohio State, Ole Miss and Stanford.

He averaged 13.8 points, 4 rebounds, 2.7 assists and 1.5 steals while shooting 51% on two-pointers and 31% from three-point range for Calvary Christian as a junior.

Seeing the Razorbacks have the No. 2 class in the nation gives him reason to look hard at Arkansas.

“They have to be doing something right for them to have the best recruiting class,” Allen said. “They got Nick Smith, Anthony Black and Jordan Walsh. Those guys aren’t just going to go anywhere. They’re going to go somewhere they trust they’ll be developed. I’m looking at that.”

Playing for Atlanta-based The Skill Factory, Allen averaged 9.6 points, 3.7 rebounds and 1.7 assists in the first two sessions of EYBL play. He’s also rated ESPN’s No. 4 shooting guard and No. 23 recruit in the nation.

Allen, who was committed to LSU but re-opened his recruitment when Tigers coach Will Wade was fired, appreciates Brewer’s approach to recruiting.

“He’s a good guy,” said Allen, who has a 3.8 grade point average and is looking to major in business. “He talks more than just basketball, so the vibe I get from him is good.”

An admirer of good defense, Allen likes how Musselman focuses on defense and is energetic on the sideline.

“(He) coaches with energy,” Allen said. “You can tell he’s that way on and off the court. He truly cares about them because it shows how the players play, so they know Coach is all in for them.

"They’re going to give their best to play hard. The players are a mirror of Coach Musselman.”