Big man off campus: Williams will stay in NBA Draft 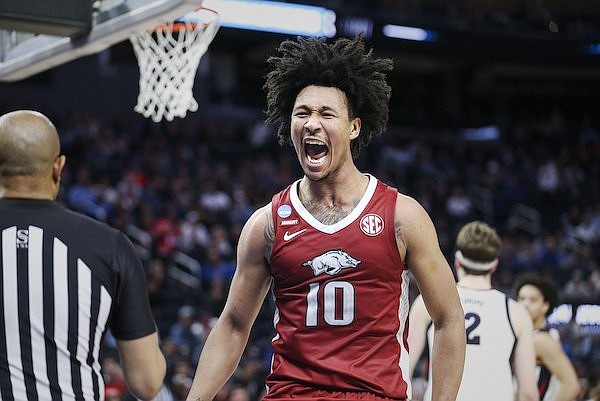 Arkansas forward Jaylin Williams celebrates a play during an NCAA Tournament game against Gonzaga on Thursday, March 24, 2022, in San Francisco.

Williams, a 6-10 All-SEC forward, announced Saturday he’s keeping his name in the NBA Draft and will not return to the University of Arkansas for his junior season.

“Jaylin had a really good two years, and all of us are very happy for him and wish him the best of luck,” Razorbacks Coach Eric Musselman said in a text message after Williams’ announcement.

Williams, who will turn 20 on June 29, entered his name in the draft on April 4, but didn’t sign with an agent at that time to keep open the possibility of returning to Arkansas.

But in recent weeks it became increasingly clear Williams likely would stay in the draft as he was invited to the NBA Combine and did well enough there that he didn’t go through a second day of scrimmaging. He has been going through workouts for NBA teams, including the Atlanta Hawks and Charlotte Hornets.

Several NBA websites project Williams as a second-round pick in the draft, which will be held June 23.

“From a very young age my dream was always to play in the NBA,” Williams said in a post on his Twitter account. “That said, after careful consideration and many talks with my family, I have decided to forgo my remaining NCAA eligibility and pursue my lifetime goal of competing in the NBA.”

Williams, from Fort Smith Northside, thanked God; his father, Michael Williams, and other family members; Musselman and his other coaches; his teammates; and the fans.

“For a kid that grew up in Fort Smith, Arkansas, it has been nothing but a dream come true these past two years,” he wrote on his Twitter account. “All of the love has been felt. From court rushes to the March Madness runs, we could’ve never done it without all of you!”

The Razorbacks had two victories over No. 1-ranked teams last season when they beat Auburn 80-76 in overtime at Walton Arena in Fayetteville and beat Gonzaga 74-68 in the NCAA West Regional semifinals in San Francisco.

In SEC play, Williams averaged 13.6 points and 10.2 rebounds. He set career-highs with 22 points at Alabama and 16 rebounds against Tennessee.

“I think he’s been really focused on trying to make the NBA,” Musselman, a former NBA head coach with Golden State and Sacramento, said May 18 after a speaking engagement in Bentonville. “I don’t think there’s anything other than that on his mind, which is how his mental focus should be.

“If you declare for the draft, you should be all in and do everything you can to try to position yourself to get drafted as high as you can.”

This is the fourth consecutive year a Razorback has entered the NBA Draft with eligibility remaining. Daniel Gafford was picked No. 38 by the Chicago Bulls in 2019; Isaiah Joe was picked No. 49 by the Philadelphia 76ers in 2020; and Moses Moody was picked No. 14 by the Golden State Warriors last year.