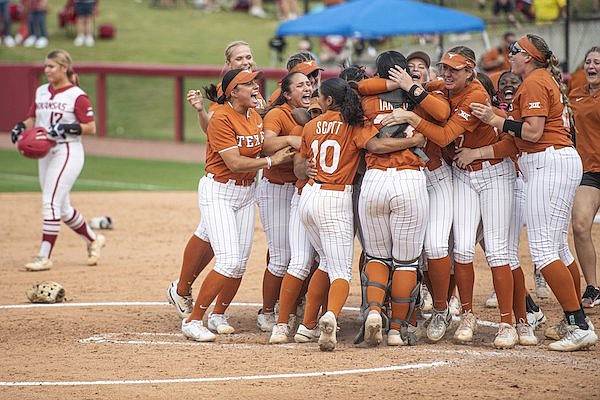 Texas players celebrate after clinching a trip to the Women's College World Series with a 3-0 victory over Arkansas on Saturday, May 28, 2022, in Fayetteville.

FAYETTEVILLE — Sophia Simpson said she had no problem sleeping Friday night knowing she was going to get the ball in the biggest game of the season for the Texas softball team.

The freshman right-hander then went out and delivered a stellar complete-game shutout to lead the Longhorns to a 3-0 win against the University of Arkansas in the deciding game of the NCAA Super Regional series at Bogle Park on Saturday.

Simpson (8-4) worked in and out of jams throughout the game, each time finding a way to keep the potent Arkansas offense off the scoreboard.

“I found out after the game yesterday [Friday],” Simpson said on when she was told she’d be the game three starter. “They were saying it was my turn. Hailey [Dolcini] had pitched awesome the two days before, and I knew I had to have her back today.”

Texas Coach Mike White said each time Simpson worked out of those jams, her confidence level seemed to rise.

“Without a doubt, because every time you get out of something like that it becomes a little more pressure on that other team to score and they start doing the what-ifs,” White said. “Left on bases hurt you. You never know when a pitcher’s going to find a groove and get going, just like we did [in Thursday’s 7-1 loss]. We had opportunities and didn’t get it and [Arkansas’ Chenise Delce] stuck in there and threw a great game against us. Today, it was on our side fortunately.”

Delce (19-3), who celebrated a birthday Saturday, was stellar for five innings, keep Texas off the scoreboard and never really being threatened.

That all changed in the top of the sixth inning.

Longhorns lead-off batter and the team’s spark plug Janae Jefferson opened the inning with a booming double to center and Texas (43-19-1) did not squander the opportunity to cash in. Mia Scott laid down a perfect bunt for a hit, sending Jefferson to third. Scott stole second and both scored easily on Alyssa Washington’s double to center for a 2-0 lead.

“Basically I was just being aggressive early in the count,” said Jefferson, a fifth-year senior who also homered Friday and made a diving catch earlier in the game Saturday to prevent an Arkansas hit. “I knew Chenise was going to come right at me.”

Texas tacked on its third run as Mary Iakopo singled to left, scoring Washington from third after she had advanced on a passed ball.

Arkansas threatened again in the sixth, which had been its big inning throughout the postseason. Danielle Gibson led off with a single into right field and Hannah Gammill walked to put two runners on with no outs. Linnie Malkin hit into a fielder’s choice that forced Gammill at second, moving Gibson to third.

After a visit to the circle by White, Simpson got a double-play grounder from Kacie Hoffmann to end the inning and keep Arkansas off the scoreboard.

“I told her I don’t like coming out. I dread it, because when I was a pitcher, I hated the coach coming out and I hate doing it myself, but it was obvious that, boy, when she missed, she missed big,” White said of Simpson, who had three wild pitches in the game. “But she just needed some settling down, just some encouragement. She’s a kid that needs encouragement and that’s what I tried to be, encouraging. Just for her to slow it down and stay in the moment. I think she gets too far ahead of herself. Just stay in the moment one pitch at a time.”

Arkansas mounted yet another rally in the seventh when Audrie LaValley singled to start the inning and pinch-hitter Rylin Hedgecock walked. KB Sides hit into a fielder’s choice with LaValley moving to third.

Like she had done the entire game, Simpson worked out of the jam, getting Hannah McEwen to pop up for the second out, then getting a fly to deep left from Taylor Ellsworth to end the game.

“Simpson did a really good job mixing speeds,” Deifel said. “That is an equalizer in our game. We have to give her credit. She was tough today.

“I felt like we were just a little indecisive. More than anything I just feel like the pressure outweighed the competing. This team wanted it really bad and I really wanted it for them. We just couldn’t get it done today.”