Holland gets pressure for Razorbacks 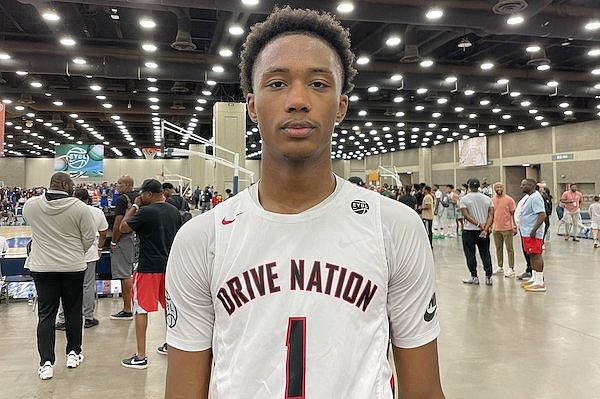 Holland and Black led Duncanville, Texas, to a 35-1 record and a third consecutive Class 6A state championship last season.

One of three ESPN 5-stars to sign with the Razorbacks, Black and fellow UA signee Jordan Walsh are finalists for the USA Basketball Men’s U18 national team. Should Black and/or Walsh make the 12-man cut, they’ll play in the FIBA U18 Americas Championship in Tijuana, Mexico, from June 6-12.

Holland, 6-8, 200 pounds, plans to make an official visit to Fayetteville on June 9-11. While it might be strange to see his former teammate on a college campus, he said he knows Black will be on him to be a Razorback if he’s not playing in Mexico.

“Me and AB talk about that all the time,” Holland said. “Seeing him down there, I don’t think it’s going to be strange. I feel like it’s actually going to be exciting. Seeing that I was just playing with this dude and now he’s going to be a high-level school like Arkansas.

"Coach Muss does a great job recruiting and I feel like when I go down there, I feel like AB is going to try and get me to go over there, as he should.”

Holland is also rated the No. 2 power forward, No. 4 overall recruit in the nation for the 2023 class and No. 1 prospect in Texas. He recently narrowed his list to Arkansas, Texas, UCLA, Memphis, Houston, Auburn and Kentucky while also considering the NBA G League.

“I look for their resume,” Holland said on how he narrowed his list. “You know dudes they have in the NBA. I’m a high-level dude. I look for basketball in transition, a game that fits me and they do a whole lot of player development.”

Playing for Dallas-based Drive Nation, Holland has averaged 11.3 points, 6.3 rebounds, 2.1 assists and 1.7 steals per game in the first two Nike EYBL sessions this spring. He showed his all-around game in a 75-44 victory over Team Melo during the first day of the EYBL session III in Louisville with 13 points, 8 rebounds, 4 assists and 1 steal.

"I do the little things that nobody else likes to do. The basic stuff and I just keep it simple.”

Holland praised Musselman and the Arkansas staff for recruiting him hard.

“The whole coaching staff, I feel like they show they really want their players,” he said.

Holland also said he’s been impressed with the Razorbacks' fan base and how active it is in recruiting prospects on Twitter.

“It shows the fans are going to have your back in thick and thin, whatever you've got to go through,” Holland said.

Holland said he plans to make an official visit to Kentucky on June 13-15 and has one in the works at Texas.

He broke down what he wants when he makes his visits.

“When I go on visits, one thing I look for is the treatment,” Holland said. “How they take care of their players when they get injured. That’s big when you go because injuries are going to happen. How fast they let you recover. I look for player development.

"I want to win a national championship, but at the same time I want to get better so I can improve my game when I go to the league.”

Musselman and his staff have 52 years of NBA experience.

“It shows they know what they’re doing,” Holland said.