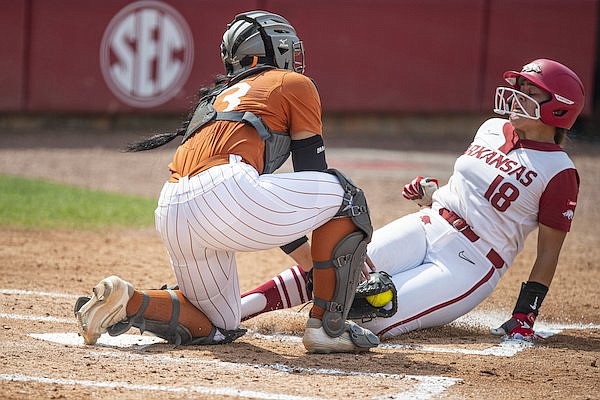 Arkansas' Marlene Friedman (18) is tagged out at home plate by Texas catcher Mary Iakopo during an NCAA Tournament game Saturday, May 28, 2022, in Fayetteville.

FAYETTEVILLE — In five of the University of Arkansas’ seven innings of a season-ending 3-0 loss to Texas on Saturday in the NCAA Fayetteville Super Regional, the Razorbacks had runners stranded while in scoring position.

The squandered opportunities ultimately did in the Razorbacks, who left nine runners on base. Arkansas ended all but two innings with chances to score remaining on the bases.

It was a trend that started in Friday’s loss when the Razorbacks left five on base.

“I think you just saw us press a little bit,” Arkansas Coach Courtney Deifel said. “I think that we’ve grown accustomed to us coming up big in those situations. That’s what we’ve done all year, and we didn’t get the timely hits today or yesterday. We did really good job of setting a table and we just couldn’t drive them in.”

In the sixth and seventh innings with their backs against the wall, the Razorbacks were able to put runners on base. In both cases, Arkansas had players on first and second base. Neither time the team was able to capitalize.

When asked if getting out of jams on defense gave his team momentum, Texas Coach Mike White had an emphatic answer.

“Without a doubt,” he said.

It was the first time Arkansas had been shut out since an April 1 loss on the road to Mississippi. Deifel said the inability to bring runners home caused stress on her team as the game progressed.

“Every time you don’t get that done, there is a little bit more pressure on your side and a little bit more confidence on the other side,” Deifel said. “When — not just in this game, any game — you get out of a jam like that, you have some momentum and we just never capitalized.”

An emotional Deifel said the inability to execute wasn’t an indicator of the desire her team had to come out on top.

“This team wanted it really bad,” she said. “And I really wanted it for them. Just didn’t get it done today.”

The win gave Texas its sixth Women’s College World Series appearance, and its first since 2013. It will give White his first trip to the WCWS with the Longhorns (in his fourth season with Texas) and his seventh as a head coach. He led Oregon to six during his nine seasons with the Ducks.

Jefferson sprinted from her spot into right-center field to track down the pop-up, diving to make a spectacular grab, then holding the ball up as she lay flat on her back.

“I hate those balls, the little dink hits” Jefferson said. “So I know that on those types of balls, you got to go really hard back to get the ball. I was trying to back up Sophia [Simpson] really and just dove and gave it all I got to catch the ball.”

The play proved to be crucial, as the Razorbacks finished the inning with runners stranded on first and second base. Jefferson was a little shaken on the play, but was able to stay in the game.

In the three games against Texas, the Razorbacks didn’t hit a long ball in 21 innings.

The two consecutive losses to Texas were the first back-to-back losses Arkansas experienced in the season.

Longhorns Coach Mike White congratulated Arkansas for the season it had.

“Commiserations to Arkansas,” he said after the game. “They had one heck of a year, winning the SEC championship and the regular season. It’s one heck of a feat. Hopefully, we can renew this rivalry going when we get into the SEC in [2026]. It should be fun.”

Previously, no team had beaten the Razorbacks twice in a row since Arizona during last year's super regional.

When Razorback fifth-year seniors Hannah McEwen, Linnie Malkin and Mary Haff first took the Bogle Park diamond in 2017, they were three of six newcomers aiming to flip fortunes for a team that had gone a combined 8-40 the previous two seasons in SEC play.

In their final season, Arkansas finished with a program-high wins, its first outright league title and SEC Tournament championship.

“They took a chance on us and they’ve built this,” Arkansas Coach Courtney Deifel said. “And I think that when you’re out there and you see the 3,000-plus doing the hog call, they did that. I know that I just felt really, really lucky that I got to coach them.

“I’m really fortunate that they chose us, and they’ve left us in a really good spot.”