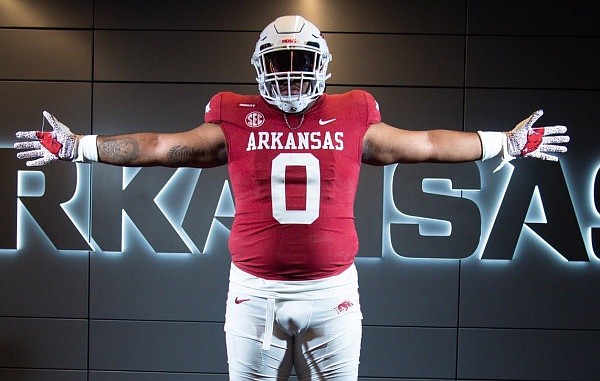 Defensive tackle Taylor Lewis during his visit to Arkansas.

Arkansas has landed the commitment of junior college defensive lineman Taylor Lewis after wrapping up an official visit to Fayetteville last week.

The Razorbacks had everything he wanted in a school, as well as a head coach and a staff that stood out.

"I feel it's the whole package,” Lewis said of why he committed. “It's away from everything, but still things around to do. It's in the SEC. The coaches love me and I love the coaches. They are in it for the right reasons. Most importantly, the head man Coach Sam Pittman. Everything he stands for, I stand for."

He also made official visits to Washington State and Oregon State. He recorded 18 tackles, 3 tackles for loss, 1.5 sacks, 2 forced fumbles and 1 pass breakup in 6 games as a sophomore and was an unanimous All-Southern California Football Association first-team selection.

Lewis was also named to the Region III All-California Community College team and JCGridiron All-America second team. As a freshman, he recorded 19 tackles, 2 sacks and 3 tackles for loss in 8 games.

He is an admirer of Razorbacks defensive line coach Deke Adams' focus on family.

“He also cares about his players, too, and that speaks volumes, especially at this level with coaches," said Lewis, who was also recruited by assistant defensive line coach Keith Jones. “You don't get that a lot. It's a business, but you've still got to care about your players. I feel he's going to develop me a lot and make me better than I was before I came here.”

He signed with the Hogs and is expected to report to Fayetteville on Monday and will be eligible to play next season.

Pittman recently said he hoped to add two defensive linemen and a receiver from the NCAA transfer portal. With the addition of Lewis, it appears the Razorbacks are done adding to the roster.