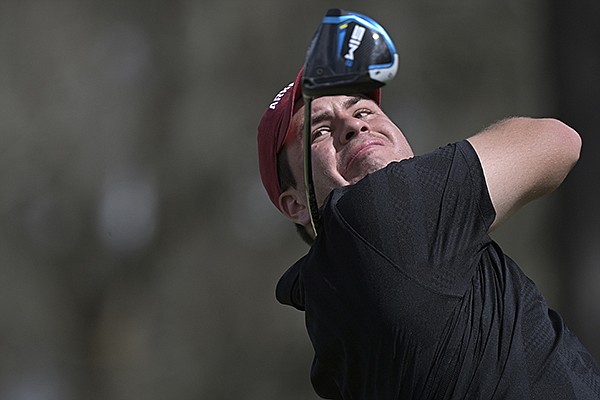 FAYETTEVILLE — Arkansas could not piece together enough birdies to offset a spate of double bogeys and finished just beyond the cut line and out of the final eight teams at the NCAA Championships on Monday.

The No. 13 seed Razorbacks shot a 13-over 293 at Grayhawk Golf Club in Scottsdale, Ariz., and finished the tournament in ninth place at 39-over, six strokes behind Texas Tech in eighth.

The final eight teams will be seeded for match play, which begins today on the par-70 Raptor Course.

The Razorbacks opened the day in eighth place, but were surpassed by the Red Raiders, who carded a 4 over in the last round and finished at 33 over.

No. 1 Oklahoma and No. 3 Vanderbilt both had bogeys on the 18th to fall into a three-way tie with No. 5 North Carolina at 14 over for the tournament, setting up a playoff to determine the top three seeds for match play this morning.

The quartet of Texas’ Parker Coody, North Carolina’s Ryan Burnett, Oklahoma State’s Eugenio Lopez-Chacarra and Vanderbilt’s Gordon Sargent tied at even-par 280 and went to a playoff to determine the individual medalist which Sargent won with a birdie on the first extra hole.

Perico and Segundo Oliva Pinto, who had a 74 on Monday, tied for 25th place at 8 over.

The senior Long had three double bogeys and shot 75 to place 75th at 25 over. Junior Wil Gibson had a 9 over in the final round and finished 77th.