Liberty QB situation in flux ahead of Arkansas game 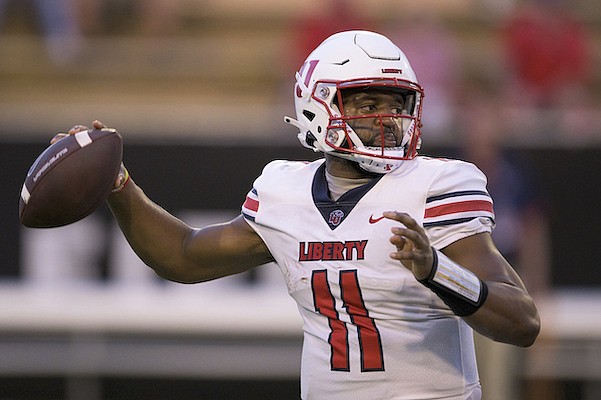 FAYETTEVILLE — Liberty football coach Hugh Freeze said Thursday it has been a rough week for his quarterbacks ahead of the Flames’ game at Arkansas.

Johnathan Bennett, who has taken the majority of the team’s snaps this season, has missed two days of practice with the flu, and Charlie Brewer, the team’s Game 1 starter, has not progressed as well as hoped from a broken hand suffered in early September. Brewer returned to the lineup in a limited role two weeks ago against BYU.

Freeze said Nate Hampton has gotten the majority of the Flames’ quarterback snaps in practice this week. Hampton, a redshirt freshman, has thrown eight passes this season and was fourth on the team’s depth chart before the season opener.

“We’re not even sure who our quarterback is right now,” Freeze said. “It’s been one of those weeks. It is what it is. We’ll go and our kids will play hard, I know that, and I like how they’ve approached things. But, dang, that quarterback room has been beat up.”

“Unfortunately we continue to have one of those years where it seems to be one thing after another,” Freeze said.

Bennett has not been ruled out for the game, but Freeze indicated he is concerned about whether the quarterback will have needed stamina.

“I think we’ll be able to catch him up on the understanding,” Freeze said of the game plan, “but it’s nothing like getting the live reps.”

Brewer, who played previously at Baylor and Utah, is struggling “to get his mobility in his hand back,” Freeze said.

“He tried it and just said, ‘I don’t feel like I can hold the ball sufficiently to function,’” Freeze said. “I thought he had a pretty good Tuesday, and then it seemed like it kind of swelled back up on him again and tightened up.

“Will (the swelling) go down between now and Saturday enough for him to feel like he could not hurt us if he’s in the game? We’ll see.”

Freeze also announced that running back Shedro Louis might miss the game following the death of his father Wednesday. Louis is the team’s second-leading rusher with 350 yards and 7 touchdowns on 79 carries.