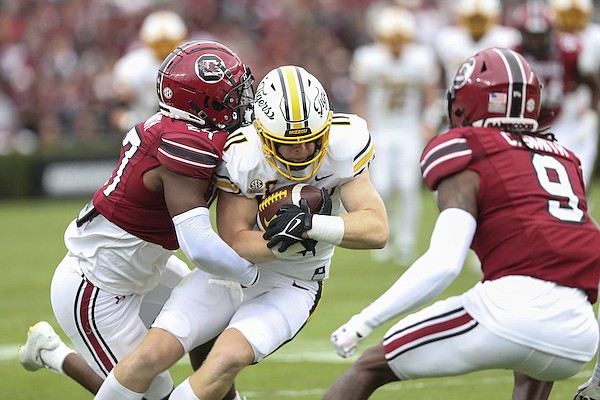 Banister has 1,009 receiving yards in 51 games after having 2 catches for 28 yards against the Gamecocks. He has 111 career receptions playing the slot.

“Barrett’s had an outstanding career,” Missouri Coach Eli Drinkwitz said. “I really appreciate him coming back for his sixth — or 15th — year in college football, I’m not sure.

“He’s been a really good player, voted a captain for our football team. He’s a guy who exudes a lot of what it means for us to be a Tiger.”

Banister is Missouri’s nominee for the Burlsworth Trophy — named in honor of former Arkansas Razorback Brandon Burlsworth and awarded each year to the top college player who began his career as a walk-on. He’s also one of 12 semifinalists for the Wuerffel Trophy, which is named for former Florida quarterback Danny Wuerffel — the 1996 Heisman Trophy winner — and recognizes a player for impactful community service.

The current Ole Miss coach and a former Rebels coach top the list of candidates to replace Bryan Harsin as Auburn’s coach, according to several national and Alabama media outlets.

Lane Kiffin, 47, is attractive to Auburn because he has a 23-9 record in his third season at Ole Miss, including 18-4 since the start of the 2021 season. He also has previous SEC experience as Tennessee’s coach and Alabama’s offensive coordinator.

Ole Miss is off to an 8-1 start and is ranked No. 11 in the College Football Playoff poll.

“We don’t really comment on those things, and they happen every year a lot of times, and all they are is a product of players performing well and assistant coaches,” Kiffin said on Wednesday’s SEC coaches teleconference when asked about being a candidate for the Auburn job. “We’re extremely happy here, got something really special going. Have great support here from the administration and chancellor.”

Ole Miss has an open date before playing Alabama next week.

“We’re just trying to get better and get ready to play the best program in the last 10 years of college football coming in here,” Kiffin said.

Kiffin said that when his name is mentioned for other coaching jobs, he doesn’t address it with his players.

“We have a pro mindset here,” Kiffin said. “Players have jobs to do, and coaches, and that’s how we run our program. So I don’t do anything about it because it’s got nothing to do with anything.

“We’ve got to prepare well every day and be ready to play in the toughest conference, toughest division. It’s really like the NFL. Every week’s a grind. Every game.”

With a 33-12 record in his fourth season at Liberty going into the Flames’ game at Arkansas on Saturday, Freeze has rehabilitated his image and shown he can still coach winning football.

Liberty recently rewarded Freeze with a contract extension that will pay him $5 million annually through the 2030 season, but that shouldn’t stop Auburn if he’s the choice.

“This is a match made in Jimmy Rane’s back room,” Dennis Dodd of CBS sports wrote in reference to Auburn’s influential booster and a member of the school’s board of trustees. “Freeze desperately wants back in [the SEC], which gives those shadowy boosters a bit of leverage over him.

“But the guy can coach. Isn’t that what Auburn needs more than anything right now?”

Bruce Pearl was fired as Tennessee’s men’s basketball coach for recruiting violations, but after being out of college coaching for three years, he was hired at Auburn and led the Tigers to the 2019 Final Four and a No. 1 ranking last season.

If Auburn can hire Pearl, why not Freeze?

Jackson State Coach Deion Sanders also is mentioned by numerous outlets as a candidate for the Auburn job. He’s well known as an inductee in both the College Football and Pro Football halls of fame, and has led Jackson State to a 23-6 record in his third season.

“I think he’d do great,” Kiffin said when asked his thoughts on Sanders being Auburn’s coach. “I think that’s a great name and they should hire him. Great recruiter.”

Other possible candidates who have been mentioned for the Auburn job are Matt Rhule, who was fired as the NFL’s Carolina Panthers coach this season but had great success as a college coach at Temple and Baylor Georgia offensive coordinator Todd Monken Coastal Carolina Coach Jamey Chadwell Baylor offensive coordinator Jeff Grimes, a former Auburn offensive line coach and Miami defensive coordinator Kevin Steele, who held the same position at Auburn and was a favorite among some boosters to get the Tigers’ head coaching job when Harsin was hired.

Kiffin, who was fired midway through his fourth season at Southern California, can relate to Harsin’s firing at Auburn before the end of his second season.

“When you’ve been through something like that, you obviously have empathy for people,” Kiffin said Monday at his weekly news conference. “It is what it is in this profession.

“I’m not complaining because this profession [pays] a lot of money, and that’s part of it.

“But when everybody roots for [the head coach] to get fired and, ‘Oh, it’s so great,’ and everything, it’s not just that person [affected]. It’s a ton of people besides his family, especially because the staffs have increased now, and kids are uprooted from schools and all those things.

“I understand why fans root for it, and I get it all, but there’s a very personal side to it.”

When Arkansas native Tommy Tuberville was Ole Miss’ coach, he left for Auburn after the 1998 season.

Tennessee was ranked No. 1 Tuesday night in the first poll released by the College Football Playoff committee.

“Didn’t know where we would be ranked, but I talked to the kids early on Monday,” Volunteers Coach Josh Heupel said Wednesday on the SEC coaches teleconference when asked about being No. 1. “It’s great for the fans to be excited about and pay attention to.

“As a program, you work to put yourself in a position to be highly thought of. At the end of the day, as a competitor, it’s all about the next one.”

The next one for Tennessee is Saturday at defending national champion Georgia, which is No. 3 in the CFP poll.

“We are only as good as our next performance, so just prepare the right way and get ready to go play hard,” Heupel said. “Our guys have been really good [about doing that].

“We understand the test we have in the next game and the next part of our journey.”

The two active college football coaches who rank 1-2 in most career victories will meet Saturday night in Baton Rouge when No. 10 LSU hosts No. 6 Alabama.

Kelly is 0-2 against Alabama, with both losses in postseason games when he was at Notre Dame.

The Tide beat Notre Dame 42-14 in the Bowl Championship Series title game in Miami to cap the 2012 season and Alabama won again 31-14 in the 2020 College Football Playoff semifinal game in Arlington, Texas.

The Alabama-LSU winner will improve to 5-1 in the SEC and be alone atop the West standings by a half-game over Ole Miss, which is 4-1 and has an open date.

Carnell “Cadillac” Williams is Auburn’s interim head coach in the wake of Bryan Harsin’s firing on Monday. Some assistants who followed Harsin from Boise State to Auburn also were let go.

Williams, elevated from his position as the Tigers’ running backs coach, will lead Auburn at Mississippi State on Saturday night.

“Well, this has been a bittersweet 48 hours,” Williams said Wednesday on the SEC coaches teleconference in his first comments since the staff changes. “There are coaches that lost their jobs Monday, so it’s been tough.

“Lord knows I’m definitely appreciative of Coach Harsin for what he gave the Auburn team the last two years. I’m truly, truly thankful for the opportunity he gave me to be part of this staff.”

Williams, a star running back at Auburn who was a first-round draft pick by Tampa Bay and played seven seasons in the NFL, said being the Tigers’ coach is special.

“I’m honored for this opportunity as someone who bleeds orange and blue,” he said. “This school has given me everything.”

Williams was asked about his interest in being named Auburn’s coach on a full-time basis after the season.

“Honestly, all I’m trying to do is win a football game this week and do my best for these players and this staff and the Auburn family,” he said. “Honestly, I’m taking it one day at a time — literally, one minute at a time. I’m not even focused on all the what if’s.”

Missouri Coach Eli Drinkwitz said he knows an 11 a.m. kickoff — as the Tigers have against Kentucky on Saturday at Faurot Field in Columbia, Mo. — can be tough on pregame tail-gating parties.

“It’s a challenge for our fan base,” Drinkwitz said. “It’s hard to get loosened up that early in the morning.

“You don’t probably want to crack your first beer here until after 10:30 a.m. I get that. But, you know, everybody’s got to make sacrifices. It takes what it takes to get a win.

“And we’re going to need the fans really going. I felt like in the last two games our home crowd was the best advantage.”

Look for Bowers to be a major weapon on offense for the Bulldogs against Tennessee. He had 5 receptions for 154 yards against Florida last week, including a 73-yard touchdown.

It was the most receiving yards by a Bulldog against Florida in 100 games in the series.

Game of the Week: No. 1 Tennessee at No. 3 Georgia

Tennessee is ranked No. 1 in the first College Football Playoff poll — two spots ahead of Georgia — but the defending national champion Bulldogs are more than a touchdown favorite at home.

The Vols have been beating ranked teams all season, notably ending a 15-game losing streak to Alabama, but the Georgia defense presents a significant challenge to Tennessee’s high-flying offense.

14 — Tennessee record touchdown receptions for Jalin Hyatt this season. He had five against Kentucky last week to break the Vols’ season record of 13 by Marcus Nash in 1997.

$15.575 million — Buyout Auburn owes Bryan Harsin after firing him as coach according to the Montgomery Advertiser. Half of that must be paid within 30 days of his Monday dismissal.

555 — Yards in total offense for Georgia in the Bulldogs’ 42-20 victory over Florida. It was the most yards Georgia has gained in 100 games against the Gators, surpassing the 502 the Bulldogs had in 1976 when they beat Florida 41-27.

“I am incredibly disappointed that I won’t get to lead the Auburn football program and these players into the future. I poured my heart and soul into this program and team. We stood together in the face of considerable challenges and outside noise.”

— Bryan Harsin in a statement on his firing as Auburn’s coach.

“They do a great job with their eyes and they are great at wrapping up. They have great speed on all three levels of their defense. It is not just one guy that is there at the party, there are a bunch of guys closing in and that space constricts and makes it extremely difficult.”

“We showed we’re the real Columbia.”