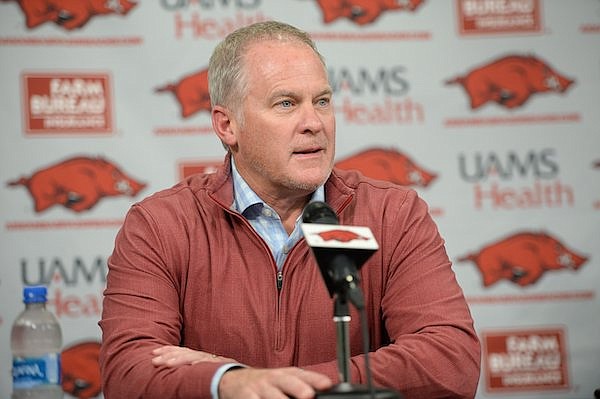 FAYETTEVILLE — Smart of the University of Arkansas and prominent boosters recognizing Athletic Director Hunter Yurachek’s value to the Razorbacks.

Even smarter for all UA aspects if the Board of Trustees gets off its deadlocked dime and recognizes Dr. Charles Robinson’s UA value, naming him chancellor of the UA’s flagship Fayetteville campus.

Auburn University offering its athletic director’s job to Yurachek prompted his  UA pay raise to $1.5 million per year and a contract extension.

Perhaps most importantly, Yurachek reestablished the Razorbacks belonging to Arkansas rather than the coldly distant corporation as perceived under Long.

With 23 years UA experience starting as an assistant professor of history after earning a masters at Rice University and doctorate at the University of Houston, Robinson climbed to UA provost. He was named the UA’s interim chancellor in August 2021 after the abruptly forced exit of Joe Steinmetz, a disastrous choice the Board hired from Ohio State.

Along his rise from assistant professor, Robinson, the first Black to become a UA provost and interim chancellor, effectively interacted serving on various important committees. He has earned massive support from faculty, students, alums and administrators. As interim chancellor, he’s grown the UA  through difficult times.

Robinson’s ascension to permanent chancellor seemed so from the get-go obvious that the Trustees’ 5-5 deadlock needlessly tarnishes what would have been celebrated campus-wide.

It does no favors to the other candidate, Daniel Reed, 65, the presidential professor of computer science at the University of Utah.

Reed sports impressive credentials. But if chosen over Robinson, it seems Reed might enter Fayetteville like a belatedly summoned pinch-hitter inheriting a 0-2 count.

“Because it’s an SEC win… “ Pittman said,  “No disrespect, but it means more.”

Asked the same post Auburn, Jefferson summarized, “This one right here. We needed an SEC win. So I’ll say this one.”

However with his Razorbacks reeling from a three-game SEC skid, Pittman imperatively approached the BYU non-conference game.

“This was everything,” Pittman said. “We had thrown all our eggs in this basket.”

On SEC Network, Liberty comes burning at into Reynolds Razorback Stadium ranked 23rd in the AP and Coaches polls.

So while the SEC allegedly just means more, the rankings, though not the oddsmakers, take Liberty over the unranked Hogs,