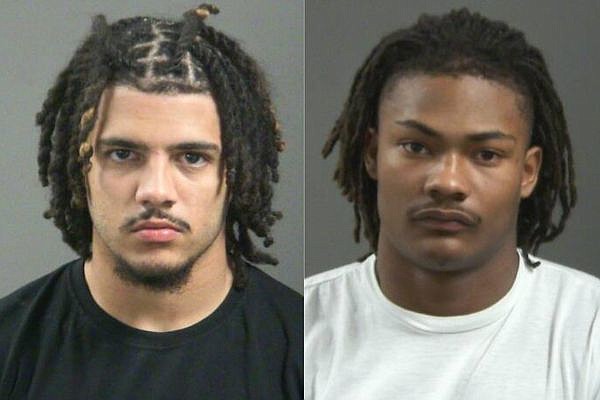 FAYETTEVILLE — University of Arkansas defensive backs Myles Slusher and Anthony Brown were arrested on disorderly conduct charges early Sunday after an incident with Fayetteville Police officers, hours after the Razorbacks lost 21-19 to Liberty on homecoming.

Slusher and Brown were processed into the Washington County Detention Center around 3 a.m. and were released about 9 a.m. on $265 bonds. Hearings for the two are scheduled for Monday morning in Fayetteville District Court with a court date of Dec. 1, based on information on the detention center website.

According to the Fayetteville Police Department preliminary reports, Brown was among a group of individuals standing in the street around 336 N. West Ave., around 2 a.m. in the restaurant and bar district just off Dickson St.

An officer on foot patrol noted he told Brown, 19, to get out of the street and he initially complied. The officer went on to report he continued to move more of the crowd out of the roadway before finding Brown “intentionally standing in the roadway a second time.”

The officer stated he grabbed the sleeve on Brown’s right arm and walked him to the sidewalk, where Brown pushed him away.

“Brown was taken to the ground and taken into custody,” according to the report. “Brown engaged in fighting behavior, congregated with two or more other people in a public place refusing to comply with a lawful order to disperse, and obstructed vehicular traffic in a public place.”

In a separate arrest report, a second officer, who was also trying to disperse the crowd, noted the commotion going on with Brown and witnessed “another male, later identified as Myles Slusher grabbed Officer [J.] Barnett and attempted to pull him away from Brown. Other officers began attempting to separate Slusher from the altercation."

The report on Slusher, 20, stated he was asked multiple times for his name and refused to provide the information. The arresting officer said Slusher did provide his name and date of birth as a transport unit arrived on the scene, according to the report.

In a statement through a team spokesman, Arkansas coach Sam Pittman said Sunday he was aware of the incident.

"We are in the process of gathering information from the proper authorities," Pittman said. "Once we have that information, we will determine their status with our team."