ESPN to show battle for the 'Boot' 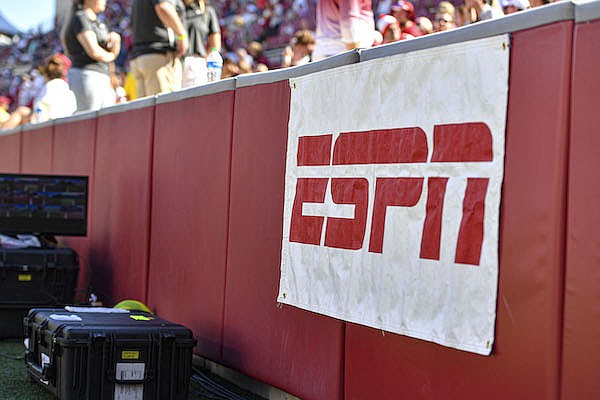 An ESPN banner is shown during an Arkansas-South Carolina game on Saturday, Sept. 10, 2022, in Fayetteville.

FAYETTEVILLE — Arkansas' game against LSU next weekend will be televised by ESPN.

An 11 a.m. kickoff time for the game was announced early last week, but the network was not chosen until after this weekend's games were played. The game was also under consideration for the first half of a CBS doubleheader.

CBS will televise a Tennessee home game against Missouri to begin its doubleheader, which will conclude with a game between Alabama and Ole Miss.

LSU (7-2, 5-1 SEC) defeated No. 6 Alabama 32-31 in overtime on Saturday in Baton Rouge, La. The Tigers were ranked 10th in the first College Football Playoff ranking of the season and are likely to move up when the rankings are updated this week.

Arkansas won 16-13 in overtime at LSU last season to snap a five-game losing streak in the series.