Get to know the Arkansas men's basketball roster 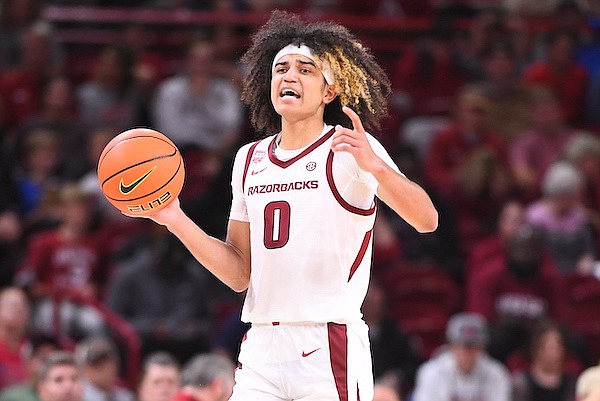 Arkansas guard Anthony Black is shown during an exhibition game against Rogers State on Monday, Oct. 24, 2022, in Fayetteville.

THE SKINNY Black is a high-flying, athletic true freshman guard, rated the top overall point guard in the 2022 recruiting class by 247Sports. He is a McDonald’s All-American, part of the 2022 USA Nike Hoop Summit team and a member of the USA Basketball Men’s U18 National Team which won a gold medal at the FIBA Americas Championship earlier this year. He transferred to Duncanville HS (Texas) for his senior season and helped the team to a 35-1 record and No. 1 national ranking by MaxPreps. Black was also a 3-star recruit at receiver and got an offer from Arkansas football.

THE SKINNY Council was named the 2022 American Athletic Conference Sixth Man of the Year as a sophomore after scoring the league’s most points among reserve players. He led the Shockers in scoring 10 times in 2022, including in eight of the team’s final 12 outings. Council had the team’s second-most steals (32) and scored 10-plus points in 17 games. As a freshman, he was teammates with former Razorback forward Trey Wade at Wichita State.

LAST SEASON Averaged 6.3 points, 5 rebounds and 1.9 blocks while starting 22 games at Missouri as a freshman.

THE SKINNY Brazile transferred to Arkansas after playing for Missouri as a freshman, where he was third in the SEC in blocked shots. He recorded a blocked shot in 20 of the 24 games he played in, with a career-high six against Illinois. As a freshman, he began to look stronger as the season progressed, posting a season-high 15 points in the team’s SEC Tournament game against LSU. He has the ability to stretch the floor and shoot the three as well, going 2-of-3 against Kansas from behind the arc last season.

LAST SEASON Averaged 26.5 points, 8 rebounds and 7.3 assists as a senior at North Little Rock HS, powering the team to the Arkansas Class 6A state championship.

THE SKINNY Smith is rated the No. 1 high school prospect in the 2022 class by 247Sports, and a consensus top-3 recruit from major outlets. He is a McDonald’s All-American, two-time Arkansas Democrat-Gazette All-Arkansas Player of the Year (2021 and 2022), member of the 2022 USA Nike Hoop Summit Team, and was 1 of 5 finalists for the 2022 Naismith High School Boys Player of the Year. He also played in the Jordan Brand Classic, which he was named co-MVP of after scoring 27 points. Smith is one of the three highest-rated recruits to sign with the Razorbacks, joining Corliss Williamson and Al Jefferson.

LAST SEASON Averaged 8.3 points and was second on the team with 102 assists while playing in all 37 games as a sophomore.

THE SKINNY Davis began the season as a starter for the Razorbacks in 2022, but over time began to flourish coming in as a reserve. Arkansas was 14-3 in games and he was the first player to come in off the bench en route to reaching the NCAA Elite 8. Davis scored a season-high 26 points during a neutral site loss to Oklahoma. He is one of two returners with significant playing time. Davis hit a game-winning jumper against Oral Roberts as a freshman in the NCAA Sweet 16.

THE SKINNY Pinion is a sharp-shooting, 4-star recruit out of Morrilton HS, where he was twice named to the Arkansas Democrat-Gazette All-Preps first team (2021 and 2022.) He was a McDonald’s All-American nominee as a senior, a year in which he increased his points per game average from 17.2 to 24.3, while shooting at an 88% clip on free throws. Pinion was named to the Class 4A All-State team as both a junior and senior.

THE SKINNY Graham transferred to Arkansas in the offseason by way of Arizona State, where he played his first three years of college. He was a second-team All-Pac 12 selection as a junior after ranking second on the team in rebounds and posted 14 games with double-figure scoring. As a sophomore, Graham was third in the Pac-12 with 1.62 blocked shots per game. His best performance as a Sun Devil was during a triple-overtime upset win against No. 3 UCLA, a game in which he scored 16 points, had 10 rebounds and dished out a career-best six assists.

THE SKINNY Dunning was rated a 4-star by ESPN, and the top player in the state of Alabama. He was twice named the Gatorade Alabama Player of the Year (2021 and 2022), and as a senior was chosen as Alabama Mr. Basketball. Dunning was a McDonald’s All-American nominee after three times being named a Class 6A first-team All-State selection.

THE SKINNY Walsh is a consensus 5-star recruit in the 2022 class, and one of three Razorbacks who were McDonald’s All-Americans as a senior. He is rated the 11th-best player in the class by ESPN, and the fourth-best forward of the cycle. Walsh is the top prospect out of the state of Texas according to ESPN and he played in the Jordan Brand Classic. He played his final varsity season at Link Year (Mo.) Academy, where he helped the team to a runner-up finish in the GEICO Nationals.

LAST SEASON Averaged 9.9 points and 7.3 rebounds while playing 31 games as a junior at Rhode Island.

THE SKINNY Mitchell transferred to Arkansas in the offseason from Rhode Island where he spent two seasons after playing his freshman year at Maryland. He led Rhode Island in rebounding, averaging 7.3 per game last season, while chipping in 1.39 blocks per contest. His seven double-doubles were sixth-most in the Atlantic-10. His twin brother Makhel transferred with him from Rhode Island.

LAST SEASON Averaged 6.4 points and 4.8 rebounds while playing in 26 games as a redshirt junior.

THE SKINNY Johnson played his first season with the Razorbacks in 2022 after transferring from Arkansas-Little Rock. He established himself as a tenacious, hard-nosed force down low, averaging the most rebounds per game among players who played under 30 minutes per contest. During his sophomore season with the Trojans, Johnson was a third-team All-Sun Belt selection after averaging 11 points and 6.7 rebounds. His older brother, Dakari, played for Kentucky.

LAST SEASON Earned a scholarship after starting the season as a walk-on, and saw the floor in four games.

THE SKINNY Argobast played a season at Lane (Ore.) Community College before coming to Arkansas as a walk-on. He averaged 10 points while shooting 40% from beyond the arc in high school.

THE SKINNY Mitchell transferred to Arkansas in the offseason after leading Rhode Island in scoring and blocked shots as a junior. His 2.39 blocked shots per game led the Atlantic-10 and was 25th-most in the NCAA. He spent his freshman season at Maryland before playing two years at Rhode Island. His 5.6 rebounds per game trailed only his twin brother, Makhi, who transferred to Arkansas with him.

LAST SEASON Averaged 23.1 points and 6.3 rebounds as a senior at Magnolia HS, which he guided to three Class 4A state championships.

THE SKINNY Ford is a consensus 4-star guard in the 2022 class, and the third-highest recruit in the state of Arkansas. ESPN listed him as the No. 71 overall prospect, and his stellar varsity career landed him a McDonald’s All-American nomination. Ford was twice named to the Arkansas Democrat-Gazette All-Preps first team (2021 and 2022), and he was the Gatorade Arkansas Player of the Year in both those seasons. He was he 2022 4A State Tournament MVP after leading the Panthers to an unblemished 30-0 season, capped with his 29 points in the state title game.

LAST SEASON Earned a walk-on spot with the team and saw the floor in five games.

THE SKINNY Blake played his senior year at Link Year (Mo.) Academy, after previously playing for Fayetteville High School. He averaged 13 points and seven rebounds as a senior, and walked on to the Arkansas basketball team.