Get to know the Arkansas women's basketball roster 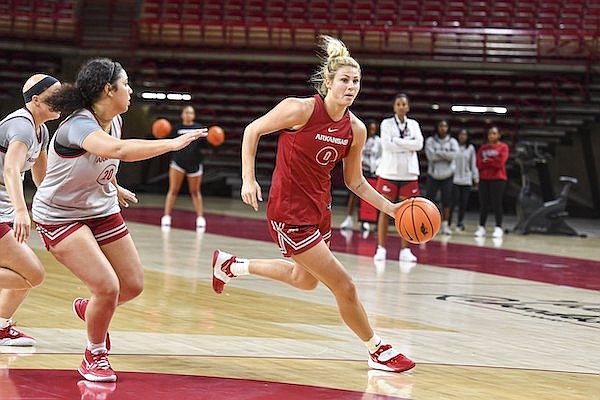 LAST SEASON began her freshman season with UConn, and saw action in 12 games before transferring to Arkansas mid-season.

THE SKINNY Poffenbarger was the No. 30 recruit in the 2021 class and signed with UConn. She played 12 games before entering the transfer portal and signing with Arkansas. In high school, she was twice named an all-state first team selection and earned 2020 Ms. Maryland Basketball honors. Poffenbarger competed at the 2019 FIBA Americas U16 Tournament, in which she averaged 7.2 points, 4.3 rebounds and 3.7 assists in. She and teammate Makayla Daniels, who is also from Maryland, played on the same AAU team together.

LAST SEASON Averaged 12.2 points, 3.7 rebounds and 3.1 assists as a true freshman, playing in 31 games for Arkansas.

THE SKINNY Spencer became the first Razorback since 2009 to win SEC Freshman of the Year honors after scoring in double figures in 20 games. She started 27 games for Arkansas and scored a season-best 22 points and seven rebounds to will Arkansas to a road comeback win against Missouri. She shot 42.5% from the floor and 34.4% from 3-point range, while showing quickness getting to the rim and finishing often. She logged 96 assists which was the 20th-most for a single season in program history.

LAST SEASON Averaged 7.6 points and 4.8 rebounds as a redshirt junior at Arkansas.

THE SKINNY Barnum has battled injury for large amounts of her collegiate career, but when healthy has seen much playing time for the Razorbacks. Prior to an injury in 2021, she had scored in double figures in five of nine games. She was one of 20 power forwards named to the Katrina McClain Award Preseason Watch List for 2022-23. Barnum has the longest current tenure with the Razorbacks, arriving with the team in 2018. She has played in 77 career games.

LAST SEASON Averaged 3.2 points and 3.7 rebounds, and was one of just two players who saw action in all 32 games.

THE SKINNY Langerman carved a spot for herself in the Razorbacks’ rotation with her grittiness and toughness, often being labeled the “glue girl” for the team. At just 5-9, she crashes the glass hard, and is often the first one to track down loose balls. Prior to Arkansas’ game-winning shot from Amber Ramirez against Auburn, Langerman forced a tie ball to get the Razorbacks the possession. She scored a career-high 17 points against Missouri.

LAST SEASON Averaged 1.2 points and 0.8 rebounds in 15 games as a freshman.

THE SKINNY Sage was recruited to Arkansas as a sharpshooter. She led the state of Oklahoma in 3-point percentage and free throw percentage in 2020. Sage was the 84th-best recruit in the 2021 class according to Premier Basketball. Her season-high scoring effort as a freshman came against Tarleton State, a game she scored six points in off 2-of-2 three-point shooting.

THE SKINNY Johnson earned a 2022 McDonald’s All-American nomination as senior at Mustang HS, where she spent her final two years of varsity play. She posted a 46% field goal percentage in 2021-22 and made the 11th-most total free throws in Oklahoma with 80.

LAST SEASON Played for Fayetteville HS and was named to the 6A-West All-Defensive Team as a senior.

THE SKINNY Lindsey joins the Razorbacks as a local product from Fayetteville HS. She was the Northwest Arkansas Democrat-Gazette Player of the Week on Feb. 2, 2022. She helped lead the Bulldogs her team to the state semifinals in 2020 with a 55-53 win over Northside High School.

LAST SEASON After playing her first two seasons as a walk-on, was placed on full scholarship after seeing action in 14 games.

THE SKINNY Hughes is local product and earned a walk-on spot as a freshman after being Bentonville’s second-leading scorer. She was named to the Northwest Arkansas Democrat-Gazette first-team as a senior, a year in which she also led Bentonville to a 6A-West title and state runner-up.

THE SKINNY Wolfenbarger was selected to the SEC All-Freshman Team a year ago after making an impact for the Razorbacks in an unnatural position. Recruited as a wing player, she spent much of the season down low due to the team’s lack of size coupled with injuries. She notched two double-doubles as a freshman, both coming in SEC play. Wolfenbarger was the No. 7 overall recruit by ESPN in the 2021 class and was the Razorbacks’ first McDonald’s All-American signee since 2016. She earned Arkansas Democrat-Gazette Player of the Year honors as a Northside HS senior in 2021.

THE SKINNY Dauda was rated the No. 13 player nationally by ESPN in the 2021 class, and signed with the Razorbacks after decommitting from Baylor. She was a consensus 5-star prospect out of Bentonville HS and a McDonald’s All-American in 2021. She averaged 17 points, 8.1 rebounds and 2.6 blocked shots as a senior. Dauda also owns the Bentonville High School records in scoring, rebounding and shot-blocking.

LAST SEASON Averaged 11.7 points and 4.6 rebounds while starting all 29 games at Syracuse.

THE SKINNY Carr came to Arkansas by way of the transfer portal from Syracuse, where she led the team in made three-pointers (60) and free throw percentage (91.7%). She scored in double figures 18 times for the Orange, and notched a double-double with 17 points and 15 rebounds against Morgan State. She is nearly flawless from the free throw line, where she shot 95.8% in ACC play as a junior. Carr tallied at least one three-pointer in all but two contests, and scored in all 29 games.

THE SKINNY Daniels has been a mainstay in Arkansas’ starting lineup since arriving to Fayetteville as a freshman in 2019. She had her best season statistically as a junior in 2021-22, posting career-highs in points, rebounds, assists, steals and minutes played per game. She led the team in rebounding from the point guard spot. She joined the 1,000-career point club in the NCAA Tournament against Utah, becoming the 31st Razorback to ever do so. Daniels earned her first career double-double with 13 points and 14 rebounds in Arkansas’ SEC Tournament victory over Missouri. She was named by SEC coaches as a 2022-23 preseason second-team All-SEC selection

THE SKINNY Ellis earned a spot in the rotation as a freshman and played her best game of the season in Arkansas’ last-second win against Auburn. In that contest, Ellis scored 11 points and pulled in five rebounds. Against Arkansas Pine-Bluff, she swatted five shots, a season-high. She led the state of Oklahoma in rebounds and blocks in 2018, and averaged 13.4 points and 6.8 rebounds as a senior at Vanoss HS.