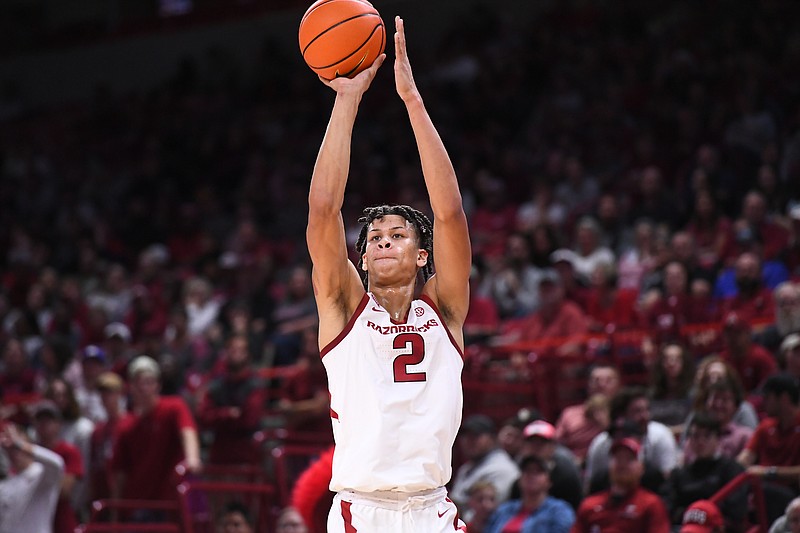 FAYETTEVILLE — Toward the end of a Zoom press conference in Como, Italy, Trevon Brazile was asked if he was ready to return to Arkansas after the Razorbacks’ extended August stay overseas.

A promising and talent-rich forward transfer from Missouri, Brazile answered in the affirmative. He added that he got more than a touch homesick and missed American food and missed his close friends and family.

What he did not miss during Arkansas’ 11-day run through Spain and Italy was many shots.

Over the Razorbacks’ four exhibitions, Brazile made 29 of 34 field goal attempts, including 13 of 15 in a 28-point outburst in the finale against the Bakken Bears, a professional team from Denmark that featured players in their late 20s and early 30s. He averaged a team-high 15.8 points, grabbed 5 rebounds and came away with 2.3 steals per game.

“I know it’s exhibition games and all that, but he played as well as any guy that I’ve seen play over a four-game stretch,” Arkansas coach Eric Musselman said. “I mean, if you look at his numbers, they’re absolutely insane what he’s done. He’s just so quick to the ball, he’s so long.

“He runs the floor. He can play facing the basket, he can play with his back to the basket. I thought he was just unbelievable. He’s got an incredible, incredible future ahead of him.”

That seems to be the consensus on Brazile when speaking with his current head coach, opposing coaches and teammates past and present. Now under the guidance of Musselman, who had high praise for the forward prior to the Razorbacks’ meetings with the Tigers last season, Brazile could see his potential unlocked by Arkansas’ staff.

The Razorbacks are projected to finish second in the SEC this season and are a top-10 team entering the Nov. 7 season opener against North Dakota State. Should Arkansas live up to its preseason hype and replicate — or surpass — the postseason success of the last two years, Brazile’s play will likely be a key reason why.

“He’s uber-talented,” Musselman said at SEC Basketball Media Day in late October. “He can probably play three positions. It’s interesting that we never played him at the 3 until the Red-White Game. With the makeup of having four true bigs, we slid him down to the 3 spot. I don’t know if we’ll do that in-season, but we are starting to have him execute some at the 3.

“He’s got great versatility, can shoot the ball. He’s a guy that’s looking forward to a game. We’ve had a lot of practices, and I think right now he wants a game and wants to play.”

The 6-10 forward was a true bright spot for Missouri. According to data on KenPom.com, Brazile recorded the nation’s No. 28 block rate, rejecting 10.1% of opponents’ two-point attempts when on the floor.

The only SEC player with a better mark in that category was Auburn’s Walker Kessler (19.1%), who won the league’s defensive player of the year award. In conference play, Brazile’s block percentage fell to 8.4%, but the mark still placed him third in the SEC.

He blocked multiple shots 14 times in conference play and 17 times overall. Brazile’s best shot-blocking effort last season came against Illinois and All-America forward Kofi Cockburn on Dec. 22. He blocked a season-high 6 shots in the Tigers’ 88-63 loss and posted a block rate of 30.6% in the game, per CBB Analytics.

As a freshman, Brazile averaged 1.5 blocks per personal foul committed. According to CBB Analytics, that number placed him in the 99th percentile nationally.

“He got a lot tougher over the year,” Missouri forward Kobe Brown said at SEC Basketball Media Day. “He came in really skinny, gained a lot of weight, gained a lot of confidence. His confidence was kind of low at first, but now he plays with his chest, and that’s all we used to could ask for.

“I’m happy for him. He definitely deserves (recognition). He works hard. I used to see him come in all the time and work hard. He put the work in to get the results.”

More from WholeHogSports: Brewer believes Hogs can get over Elite Eight hump in 2023

In a pair of games against Arkansas last season, Brazile put up 5.5 points on 45.5% shooting, 8 rebounds and 1.5 blocks per game. Because of the Razorbacks’ in-depth game plan and the in-game execution of that plan, Arkansas forward Kamani Johnson said the team was able to limit his effectiveness offensively.

Now that Johnson and Brazile are on the same side, Johnson is a believer in the transfer’s abilities. He added that Brazile consistently impresses behind closed doors.

“Man, TB is a unicorn,” said Johnson, one of Arkansas’ two returning scholarship players from 2021-22. “I mean, I guess we didn’t really notice it playing Missouri last year. But when you see some of the stuff he does in practice, he’s freakishly athletic, he has a great shot.

NBA draft analysts are beginning to come around on that idea, too. In early October, Brazile appeared on a Bleacher Report mock draft for 2023 as the No. 34 overall pick.

He noted during the summer that as a freshman he drew comparisons to the Orlando Magic’s Jonathan Isaac. The 6-10 forward from Florida State who was the No. 6 overall pick in the 2017 NBA Draft.

“Huge upside. It’s unfortunate he went to Missouri and Missouri wasn’t very competitive," Arkansas recruiting coordinator Ronnie Brewer said Nov. 2 at the Hawgs Illustrated Sports Club. "Their culture wasn’t where it is (here). It’s not a knock on Missouri. It’s just our culture is a little different, our prep is a lot different, our goals and aspirations are probably a lot higher than most teams.

“With Trevon, we’re asking him to do a lot more than what he’s accustomed to doing. It’s a learning curve that I think he’s approaching with an open mind that he wants to get better. His goal is to get to the NBA, so how can he get there? There’s a lot of steps he has to take.”

Brazile is driven by a want to be among the select few who not only make it to the NBA, but have a long career in the league.

“I want to be one of those 1% guys,” Brazile said. “When guys make it to the league, it’s two or three years. It’s hard to be in the NBA, you know? That’s my end goal, is to be in the NBA. What kind of motivates me is to not be one of those regular guys that just goes through the college process, plays one or two years in the NBA and then you never hear about them again.

“I just want to be a long-term guy. I’m just going to try to be the best person I can be, best player I can be and just be aggressive on offense.”

And in his final outing with the Tigers he added against LSU a career-high 15 points, which followed a 9-point, 9-rebound, 3-block showing in Missouri’s SEC Tournament-opening victory over Ole Miss.

As great of an impression as Brazile made on Musselman, he may have jumped out more to the Rebels’ Kermit Davis, who is entering Year 5 with the program. Davis’ team faced Brazile three times, and he averaged 7.7 points on 72.7% from the floor, 5 rebounds and 1.7 blocks in those meetings.

“I talked to (former Missouri coach) Cuonzo (Martin) about Brazile when he was there, and I thought maybe he had the best upside of any freshman in our league last year,” Davis said at SEC Basketball Media Day. “He played really good against us, as athletic as anybody.

“I think he’ll probably be one of the guys I’d bet in college basketball that will be a guy that’s maybe ranked here and will go up. I don’t think he made any preseason All-SEC teams. I’d be shocked if he doesn’t make a postseason one.”

Brown said that he misses playing alongside Brazile, and facing him during SEC play will be odd. He also labeled Brazile as “a real crowd-pleaser.”

Arkansas got a taste of that overseas. He permanently bent a rim following a dunk attempt in one exhibition, and his one-handed put-back dunk on an interior miss by freshman wing Jordan Walsh was the highlight of the foreign tour.

Asked about the dunk following the game, Brazile said he “just grabbed the rebound and the rim was right there.”

“For a guy that tall to be that explosive and have that high of a vertical and also be able to shoot the ball and put the ball on the floor when he needs to,” Brown said, “like, that’s not common in most guys.”