Loss in Texas got Hogs' attention 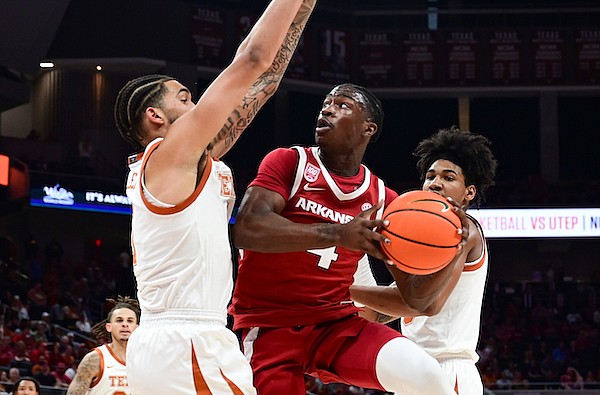 Arkansas guard Davonte Davis (4) attempts a shot in traffic during the Razorbacks' exhibition game at Texas on Saturday, Oct. 29, 2022, in Austin, Texas. (Jack Myer, Special to the Democrat-Gazette)

FAYETTEVILLE — From Arkansas coach Eric Musselman’s point of view, the No. 10 Razorbacks have long had a target on their back.

It is the result of consecutive trips to the second weekend of the NCAA Tournament and appearances in the Elite Eight, one win shy of the game’s grandest stage. And it is a byproduct of signing heralded classes from both the high school and NCAA transfer portal ranks.

More from WholeHogSports: How to watch, listen to Arkansas-NDSU

“I think some understand it and some don’t,” Musselman said. “But I think that's not unexpected. I told everybody that I thought before the Texas (exhibition) game that it would be an eye-opening experience, and it was. I think there's a lot of unknowns heading into this three-game homestand before we go to Maui.

“I think that you'll see different things start to emerge game by game, as well. Roles will start to be solidified a little bit more, although we have had a pretty good body of work to judge...off a lot of practice time, a lot of charting things, a lot of game action.

“I think that when the lights come on, things can change for players both ways — good and the opposite of good.”

The Razorbacks defeated Division-II opponent Rogers (Okla.) State 83-49 in Bud Walton Arena then, fell 90-60 at No. 12 Texas in Austin, Texas, during exhibition play. Musselman said it is a bit difficult to gauge his team’s readiness for the opener.

But guard Davonte Davis, a Jacksonville native, and forward Kamani Johnson, a transfer from Arkansas-Little Rock, believe those on Arkansas’ roster are embracing being the hunted in 2022-23.

“Coming into this thing, we knew we were going to have that no matter who was on the team, just because we’re the Arkansas Razorbacks and we’ve achieved so much through these past few years,” Davis said. “I think every single year we’re going to have a target on our back from now on the way the program is heading. Why wouldn’t we?

“Plus, we’re winning games, we’re getting guys to come here and commit to the work and hard work and things that Coach Muss brings to the table.”

Following the 30-point loss to the Longhorns, Johnson said the Razorbacks held the longest film session he has experienced since joining the program in December 2020. Musselman has mentioned previously those sessions typically last about five minutes.

Workouts in the days since, Johnson said, have been comparable to the ones Musselman held in January 2021 after blowout road losses to LSU (92-76) and Alabama (90-59). Behind closed doors, he tested his roster’s mental and physical toughness, and sparked a turnaround.

Arkansas second-year recruiting coordinator Ronnie Brewer, a former All-SEC guard with the Razorbacks and first-round NBA draft pick, said at the Hawgs Illustrated Sports Club last Wednesday that practices have since been closed to NBA personnel. At least five teams visited the program’s practice facility in the days prior to Arkansas’ trip to Austin.

“I think we’re definitely ready to get after it,” Johnson said. “I mean, after Texas, we’ve got to respond. There’s a lot of guys in there that are just hungry, ready for the season to start, ready to get on this journey. I think we’ll be ready to go, for sure.

“If any of the guys don’t understand it, they’ll learn real quick what it means to have a target on your back in college basketball. I’ve been on both sides of it, so I understand it, for sure. I think we’re ready for it.

“It’s a challenge, but we’re going to handle it well.”

Under Musselman, the Razorbacks are 3-0 in season openers with wins over Rice, Mississippi Valley State and Mercer, and he is 6-1 as a college head coach in Game 1. The lone loss came in 2016, his second season at Nevada, to St. Mary’s.

Musselman’s tenure with the Razorbacks began with a 91-43 win over Rice. He recalls his first team having great buy-in and being ready to play right away.

“We’ve got a young team,” Musselman said. “I think that the Texas game, again, helped us, but we’ve got to understand and respect every possession. We have to understand as a group how hard it is to win a 40-minute basketball game and how hard you have to compete.

“We have a lot of uncertainty on the floor, schematically, that we are still trying to work out and understand who our team is.”

The Bison are in Year 9 under coach Dave Richman, who has taken the program to the NCAA Tournament twice. They have won at least 19 games six times in his tenure.

The Bison, as a team, made 15 of 34 attempts from deep. Freshman guard Lance Waddles made 4 threes.

“They almost qualified for March Madness last year," Davis said. "They’re a really good team. They’ve got a lot of really good guys on their team. They’re not much older than us, but they are really good.

“We did scout them, and they’ve got a lot of guys that can shoot the ball really well, so we know coming into this game we’re going to have to take care of the ball, but also cover the three-point line so they’re not splashing threes everywhere to where it’s a close game the entire game.”

Musselman, known for his all-encompassing and in-depth scouting reports, added that Arkansas will need to keep 6-5 junior guard Boden Skunberg and 6-0 guard Dezmond McKinney in check. Skunberg finished with 10 points, 6 rebounds, 2 assists and 2 steals in the exhibition win.

McKinney did not play in the game, but Musselman said he “plays with pace and is very good getting to the rim."

“They present some problems and some uniqueness that maybe we don’t see in SEC play,” Musselman said. “We’re trying to come up with little themes and how we can be innovative in our preparation for a team that has good skills shooting and passing the ball.”

Johnson is aware of the Bison’s perimeter weapons and views the Razorbacks’ three-point defense as a key. North Dakota State has shot at least 35% from three in five of the last six seasons.

“If we do that, we’ll be fine. … This is what we trained for all summer and prepared for all summer. It’s like the last go-around for me, so I’m pretty excited for it, for sure.”