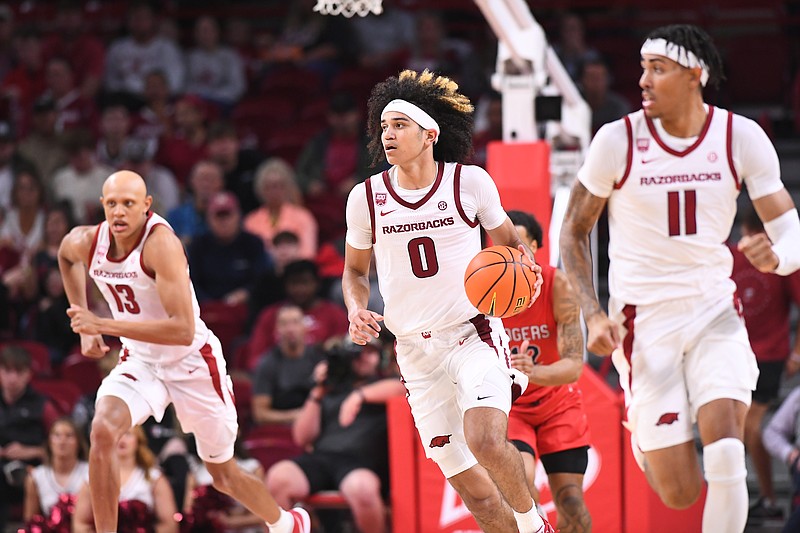 Arkansas guard Anthony Black (0) dribbles the ball in transition as Jordan Walsh (left) and Jalen Graham (right) run alongside him during the Razorbacks' exhibition against Rogers (Okla.) State on Oct. 24, 2022, at Bud Walton Arena in Fayetteville.

FAYETTEVILLE — Here are 10 predictions for Arkansas’ 2022-23 basketball season, its fourth under Eric Musselman:

• Nick Smith will average 18-plus points per game

Rationale: The star among stars in the freshman class is the clear leader of the team from an offensive standpoint. Smith can score the ball in ways few Razorbacks have ever been able to, and his ability to get quality looks at all three levels in next level. His game is aesthetically pleasing, he glides on the floor with the ball in his hands, and he essentially has it on a string. I fully anticipate Smith will lead the Razorbacks in scoring, three-point makes and free throw attempts. It would come as a shock if he does not land on a postseason All-SEC team and at least push for SEC freshman of the year by outperforming a number of ultra-talented first-year players in the league like South Carolina’s GG Jackson and Kentucky’s Cason Wallace. Smith understands he will be at the top of opposing teams’ scouting reports, and he embraces that fact. He plays with a unique edge and carries NBA-level confidence.

• Ricky Council will be top 3 in minutes played

Rationale: Smith, fellow freshman Anthony Black and Missouri transfer forward Trevon Brazile appear to be Eric Musselman’s core guys based on play in Europe and preseason exhibitions. But Council, a Wichita State transfer, is a player essential to the Razorbacks’ success, as well. They need a glue-type piece who can provide stout defensive play when facing quality guards, rebound at a solid clip on both ends and give the team a shot in the arm with effort plays that can have a big impact in games. Council can be that player when fully engaged. If he can leave an Au’Diese Toney-like mark on the defensive end, finish effectively at the rim and knock down timely threes, it will be hard for Musselman to take him off the floor. Council earned the coaching staff’s trust early in the summer with his intensity and effort, and I believe he still has it. Plenty of minutes are on the horizon for those Musselman trusts.

• Anthony Black will lead the team in steals and assists

Rationale: The former Duncanville, Texas, standout is a Jack-of-all-trades kind of player, capable of leading the Razorbacks in a different statistic each game. Black’s court vision and savvy stood out in exhibition play. Not only can he make challenging passes look effortless, they are routinely on time and on target. Black’s skip passes in the half court and advance passes in transition are high level, and he consistently throws on-the-money lobs. Defensively, his length is a disruptor for opposing guards, and he has often forced offense-initiating players to begin sets higher on the floor than they would like. That is more valuable than you might think. Black plays passing lanes well, too. At 6-7, there are few points guards across college basketball with the two-way skillset he possesses. Should he become a bit more disciplined on the defensive end — and he likely will in time — Black will be one of Arkansas’ most-counted-on players in the biggest moments of the season.

Rationale: The 6-10 sophomore did not find himself on an All-SEC team in the preseason, but Ole Miss coach Kermit Davis believes he will once the regular season comes to a close. Brazile is one of the most potential-rich players in the SEC. He has drawn comparisons to former Florida State standout and first-round draft pick Jonathan Isaac given his length, frame and explosiveness. No player on Arkansas’ foreign tour was better than Brazile. But his exhibition performance at Texas — 3 points, 1-of-3 shooting, 3 turnovers in 15 minutes — was a bit alarming. Brazile looked overwhelmed at times with the ball in his hands, and he did not embrace physicality well. I expect the game to serve as a wake-up call and for him to carry an aggressor mindset into the regular season. Brazile has tons and tons of upside. Now it is time for him to play to his true ability.

Rationale: At SEC Media Day in Birmingham, Ala., on Oct. 19, first-year Georgia coach Mike White — commenting on Musselman’s program building with the Razorbacks — said Arkansas has become one of the premier defensive teams in the SEC. According to KenPom data, the Razorbacks have finished in the top three in the league in defensive efficiency the last two seasons, including No. 1 in 2021-22. Arkansas has the length, athleticism and capable pieces to land in the top three again. Nationally, the Razorbacks have been in the top 11 in efficiency two years in a row. They may not look like a defensive juggernaut in the early going this season — and they certainly have a long way to go based on the 30-point loss at Texas — but by late January or February, Arkansas will be connected to Musselman’s liking and a challenge to score on. The Razorbacks, though, must have a couple of players develop into sound rim protectors. That will be key. I think Arkansas will be fine in regards to defending the three-point line.

Rationale: When the Razorbacks have righted the ship and began rolling in SEC play each of the last two seasons, one commonality is a player took the reins as the team’s top perimeter defender. In 2020-21, it was Moses Moody, and in 2021-22, it was Stanley Umude. Both players had tremendous stretches in which they held opposing threats to low shooting percentages when the nearest defender. Who becomes Arkansas’ top dog on the perimeter defensively this season? It is among the storylines I am most eager to see play out. Council, who already has a couple of college seasons under his belt, is my pick to assume that role. Council was described in Wichita State’s game notes as a “versatile, long-limbed athlete who impacts the game in a variety of ways.” He has a 6-10 wingspan and remarkable athleticism. Musselman said at SEC Media Day that Council has a desire to be a Toney-like contributor for the Razorbacks. Prior to signing with Arkansas, Council said his goal was to win defensive player of the year in the league he landed. It will be a tall task in the SEC. But he has all the gifts to find himself in that conversation.

Rationale: Ahead of Arkansas’ preseason, Musselman said there was a legitimate battle for roles and playing time among his four big men. The team’s exhibitions have provided a bit of clarity in that regard. Graham and Mitchell appear to have taken a step forward in recent weeks and more than flashed potential to be key contributors. Arkansas needs them to be. Graham impressed in the Red-White Game with an efficient 25 points and showcased terrific footwork and a nice spin move against Rogers (Okla.) State. Mitchell was the Razorbacks’ top forward against the Longhorns, and he, too, put on display good feet as the roll man in ball-screen actions and defending opposing guards on the perimeter as they attempted to attack him off the bounce. Both players — and this is critical — must meet head on the physicality that comes with playing on the interior, rebound with more force and finish at the rim with greater efficiency. They will continue to grow with more game action and become vital to team success.

• Jordan Walsh will average at least 8 points per game

Rationale: Asked in the preseason what he expects his role to be for the Razorbacks, Walsh said he was not sure. But that is not because he doesn’t fit in or have a place on the team. He does. Looking at what Walsh is capable of providing, his role offensively could range from dunker spot roamer to second-chance points specialist to one of Arkansas’ top scorers and three-point threats. He is talented enough to do any of those things, and perhaps all of them. Walsh did not play well in Europe, but he was in the starting lineup against Rogers State and Texas. After struggling overseas, Walsh worked on his effectiveness around the rim, attacking contact rather than attempting to avoid it, and his perimeter jumper. I foresee his role on the offensive end growing as the season progresses, and he could wind up being a double-digit point-per-game scorer on account of his jumper and aggressiveness in the lane.

Rationale: The Razorbacks’ strength offensively, particularly at the guard spots, is their ability to break defenders down off the dribble. Smith can do it almost effortlessly. And Black has shown a nice floater package, especially with Team USA over the summer in Mexico. It is also the best weapons Council and Davonte Davis have in their repertoire. It leads me to believe Arkansas will be a fairly low-volume three-point shooting team, and the bulk of its attempts will be a direct result of dribble penetration and spitting the ball to the perimeter when defensive help arrives. The quality of the attempts, if that is true, should be up to Musselman’s standard. Knocking them down, though, could be a struggle. Smith is the clear favorite to be the Razorbacks’ leader in attempts, and Walsh, Brazile, Council and Davis will follow. Musselman’s best three-point shooting team at Arkansas was his first. It made 33.4% of its looks with Mason Jones and Isaiah Joe. Arkansas has a chance to be decent from deep because Smith has shown marksman-like qualities at times and is selective in his attempts. But can others provide some pop? It may be my chief concern entering the schedule.

Rationale: The Razorbacks have gotten off to at least an 8-0 start in each of Musselman’s three seasons, including 9-0 the last two years. Arkansas will experience its first hiccups earlier than in years past. I expect the Razorbacks to open 4-0 with a win over Louisville in the Maui Invitational before dropping their final two games in Hawaii. Arkansas will enter SEC play 10-2 overall, then fall at Baylor in the Big 12/SEC Challenge. This group will be as tested as any of Musselman’s previous teams when conference play arrives, which could expedite the connectivity that has been evident the last two seasons in February and March. I believe the Razorbacks will finish in the top three of the SEC again and grab a No. 3 or 4 seed in the NCAA Tournament. Musselman’s teams are always a tough out at this point. Advancing to at least the second weekend is almost a given based on recent history. I’m not certain a Final Four comes this season, but the Razorbacks will be in contention to get over the Elite Eight hurdle with Smith and Musselman leading the way.