'It's going to be a show': Nick Smith is built for the moments that await him 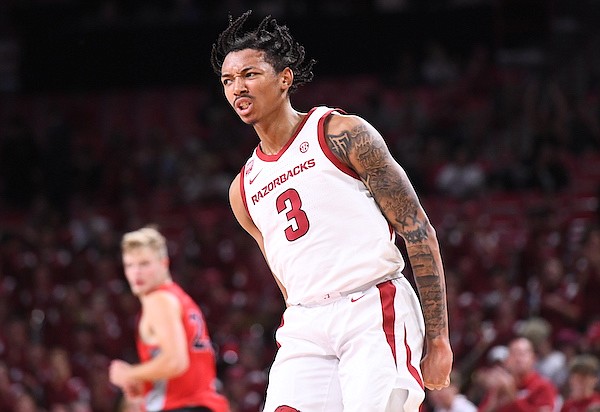 Arkansas freshman guard Nick Smith reacts after making a shot in the Razorbacks' exhibition against Rogers (Okla.) State on Oct. 24, 2022, at Bud Walton Arena in Fayetteville.

FAYETTEVILLE — Ahead of games in Bud Walton Arena, it is customary for Arkansas players and staff members to have a meal in the room where post-game interviews are conducted.

It is also common for the Razorbacks’ staff to have video playing on a board in the room, giving those on the roster one final look at the scouting report and the upcoming opponent’s personnel. Two years ago, Moses Moody routinely placed his seat directly in front of the screen during those times.

This season, Nick Smith, another projected lottery pick in the eyes of decision makers and many basketball-minded people, is front and center for Arkansas as the pre-game meals come to a close.

In his unofficial Razorbacks debut against Rogers (Okla.) State on Oct. 24, Smith finished with 9 points, 3 rebounds and 2 assists in a scripted 20 minutes. He began Arkansas’ pre-season opener by scoring the team’s first seven points.

“I kind of sat back and watched,” Musselman said, “and he was the one guy that was watching film of our opponent. I mean, I did survey, and I thought Nick was ready to play.”

Razorbacks second-year recruiting coordinator Ronnie Brewer and graduate assistant Trey Smith can attest to Smith’s preparation, as well. Brewer, who played nearly a decade in the NBA after a three-year run at Arkansas, said the freshman’s competitive nature is not unlike that of the late Kobe Bryant and Michael Jordan.

“You would have thought he had all zeros,” Brewer said. “Nick is watching film with coaches that night and in the gym shooting that night. He’s at the gym at 7:30 in the morning getting shots up. It’s an on-going cycle of how hard he’s prepping to succeed. JD Notae last year, it wasn’t a surprise that he had success on the court.

“Trey would rebound for him in the morning, we would practice, they would come back after practice and shoot and then would come back and lift late-night. And this was every day the entire year. That’s what you see in Nick Smith.

“He’s been putting in so much work to succeed that I’m not going to be surprised when he’s knocking down shots, catching lobs or tip-dunks or anything because he’s preparing himself to succeed by the work he puts in on the court, in the weight room, study hall and all aspects of life.”

Few Arkansas players, if any, have ever entered a season with expectations as high as those placed on Smith.

At SEC Media Day in Birmingham, Ala., on Oct. 19, he became the first Arkansas freshman to be named a preseason All-SEC first-team selection. Various national outlets have tabbed him a preseason All-American and candidate for national freshman of the year.

To those familiar with Smith’s aesthetically pleasing game and Alpha personality, one thing is abundantly clear: He is built for the moments that await him. He is more than comfortable, along with Musselman, being the face of Arkansas basketball in 2022-23.

“I always felt (growing up) like I had a chip on my shoulder and something to prove,” Smith said. “I feel like coming in that I had a lot of stuff to prove. People are saying because I’m a freshman and stuff like that that I’m not going to do particular things, which is fine. We’ll just see what happens.

In mid-June, rave reviews on Smith poured in from Musselman. At the time, the majority of Arkansas’ roster had been together for less than one month, but the Razorbacks’ fourth-year coach lauded his star guard for his leadership qualities, toughness and energy level.

Nothing has changed in the months since. Smith’s pro-like mentality and authoritative voice on the court remain at the forefront.

More from WholeHogSports: Razorbacks set to open season against North Dakota State | How to watch and listen to the season opener

“He’s not scared of anybody,” Arkansas forward Kamani Johnson said. “He’s a dog. He talks. And he’s going to let you know he’s here and he’s busting your ass tonight.

Essentially every coach in the Southeastern Conference believes so, too.

Crimson Tide coach Nate Oats saw Smith, who played on the AAU circuit with Alabama guard Brandon Miller, up close numerous times during the recruiting process. NBA franchises these days are looking for big guards, he said, who can do the things Smith can do.

In the summer of 2021, Smith erupted for 31 points in the championship game of the famed Peach Jam AAU tournament.

“We recruited him hard,” Oats said at SEC Media Day. “I think he’s going to be an impact player in our league. He’s got that type of talent. I think he’s one of the better freshmen in the country, and I think he’ll prove that as he goes through SEC play.”

Musselman said last year that Smith was as good as any player at the highest levels of AAU ball, adding that he could not recall watching a player at the guard position who came close to him talent-wise.

And a number of times this preseason, Musselman has alluded to the effortlessness of Smith’s movements on the floor and with the ball in his hands. It is as if the guard is gliding on skates, he said.

Jordan Walsh, another McDonald’s All-American in the Razorbacks’ freshman class, said Smith is clearly a player Arkansas will rely on this season. His leadership behind closed doors has been a plus.

“I feel like he has a lot of responsibility put on his shoulders and he’s handling it well,” Walsh said. “He’s leading in practice, he’s talking. He’s doing all the good things that help practice be more than just a practice.”

More from WholeHogSports: Season preview episode of the Basketball Podcast of Mid-America | Get to know Arkansas' men's basketball roster

The SEC this season is littered with impressive young talent. And even the best players from in the league’s crop of newcomers recognize Smith’s ability. Gregory “GG” Jackson, a 5-star prospect who reclassified in late July and joined first-year South Carolina coach Lamont Paris’ roster, has crossed paths with Smith and holds him in high regard.

As a sophomore, Jackson said, he was invited to a Top 100 camp. There, he was Smith’s roommate for a short time. He later enjoyed following Smith’s rise to national acclaim on social media.

“He didn’t continue on with the camp because he had a hand injury,” said Jackson, the No. 6 player in 247 Sports’ final rankings for the class of 2022. “But I look back on that moment in my past and high school like, ‘That was Nick Smith. That was my roommate. Oh my gosh.’

“He can score from anywhere on the court, to be honest with you. I don’t think there’s many players that can stay in front of him. He’s a pretty good defender, he has a lot of energy, and I feel like if you need a bucket then he’s going to get it for you.”

In interview settings, it is evident Smith is about his business. The guard is singularly focused and comes off as a seasoned professional in his responses.

Ahead of Arkansas’ annual Red-White Game in Barnhill Arena, he was asked if there was added excitement to playing in the program’s former home.

“I just want to play,” said Smith, who days later scored 22 points in the scrimmage. “It really doesn’t matter where we play at, honestly. I’m just trying to hoop.”

A word to the wise: Enjoy Smith’s time in an Arkansas uniform. It will likely come and go as quick as his first step.

“Man, it’s going to be a show,” Johnson said, referencing Smith. “That kid can go, for sure. Just like you, I’m excited to see him, too. That kid can go.”