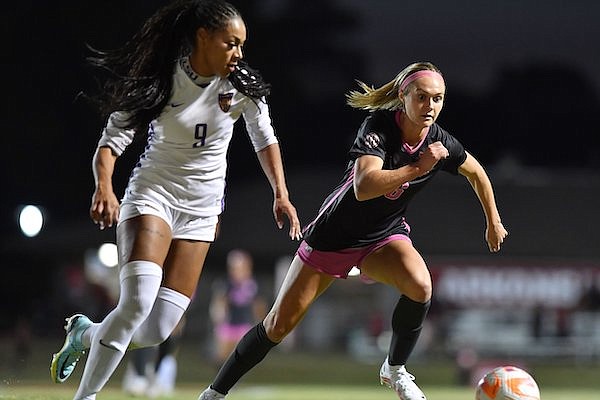 Arkansas' Anna Podojil (16) vies for the ball Thursday, Oct. 20, 2022, with LSU's Maya Gordon (9) during the first half of play at Razorback Field in Fayetteville.

The game will begin at 6:30 p.m. TV details have not been finalized.

The Razorbacks (11-3-4) are the No. 3 seed in their bracket and are guaranteed only one home game. With a victory Friday, Arkansas would play either Ohio State or Bucknell in the second round.

Second- and third-round games for Arkansas would be played in St. Louis the following week if Saint Louis University defeats Memphis on Friday. Saint Louis (20-1) is the No. 2 seed in the bracket and defeated Arkansas 1-0 in the season opener for both teams.

The Razorbacks would be in line to host second- and third-round games if Saint Louis loses its tournament opener.

Arkansas last played Missouri State in February 2021 and won 7-0 in Fayetteville. The Razorbacks lead 10-1 in the all-time series against the Bears.

Arkansas is in the NCAA Tournament for the ninth time, with all appearances coming since 2013. The Razorbacks are hosting a tournament game for the fifth season since 2016 and have a record of 6-0 in home games during the postseason.