Kelly's first year at LSU turning memorable in a hurry 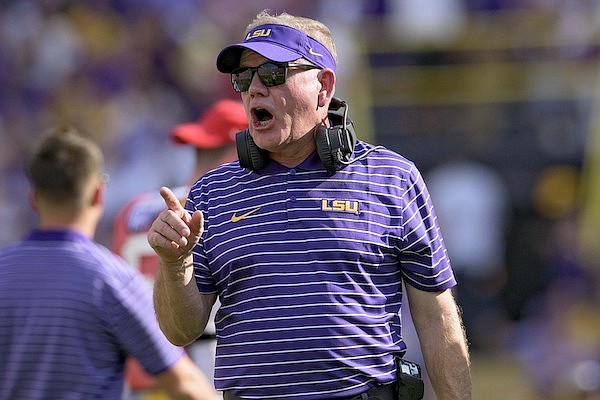 BATON ROUGE, La. — Hiring coach Brian Kelly away from Notre Dame already has cost LSU $500,000 more than anticipated — not that anyone in Baton Rouge is complaining.

The Southeastern Conference will lay a second $250,000 fine on the Tigers after fans poured onto their home field after taking down Alabama 32-31 in overtime last Saturday night.

Between that and the Oct. 22 win over then-unbeaten Ole Miss, AP No. 7 LSU (7-2, 4-1 SEC) is the favorite to represent the SEC Western Division in the conference title game on Dec. 3.

“A win like this gives us so much more confidence because we beat two top-10 teams in a row heading into (this) week against Arkansas,” LSU fourth-year running back Josh Williams said after the Alabama win. "We are ready.

“In a way, it feels like my freshman season all over again when we went to the national championship,” added Williams, who was a true freshman on LSU's 2019 team and didn't play in any games.

Williams rushed for a short touchdown in the 45-20 win over Ole Miss and last Saturday, he ran for a 2-yard touchdown in the third quarter of a back-and-forth rivalry game that ended with LSU converting a do-or-die 2-point conversion.

The moment true freshman tight end Mason Taylor crashed down across the goal line to clinch the victory, jubilant fans who'd filled 102,000-seat Death Valley with ear-splitting roars all night spilled onto the field from all corners. They left the goal posts intact, but lingered in celebration while numerous LSU players re-emerged from the locker room tunnel, phones in hand, to capture the scene, pose for photos and exchange high-fives.

It was LSU's first home victory over Alabama since 2010 — and Sept. 4 seemed like a distant memory when the Tigers opened the season with a 24-23 loss to Florida State in New Orleans.

For a program that hadn't posted a winning record in the previous two seasons, these two wins over top-10 teams shows that, as Williams said, Tigers have “a process that they stick to religiously."

“Coach Kelly is very adamant on that,” Williams said.

Kelly won a school-record 113 games in 12 seasons at Notre Dame — once reaching the BCS national championship game — before LSU lured him away with a 10-year contract worth about $100 million.

LSU athletic director Scott Woodward said the deal represented an institutional decision to bank on a proven commodity as opposed to betting on an up-and-comer. That was nothing new for Woodward, who in the same role at Texas A&M hired Jimbo Fisher away from Florida State with a similarly lucrative offer.

Woodward's goal was to bring to LSU a coach who could harness Louisiana's passion for — and financial commitment to — college football and put the Tigers in position to consistently challenge Alabama and coach Nick Saban for SEC supremacy.

That was an enticing proposition for the 61-year-old Kelly, who at Notre Dame twice met Alabama in the postseason and lost by multiple touchdowns.

But implicit in Kelly's long contract was that the coach would be granted a reasonable timeline for turning things around. The whole 2022 coaching staff was new except for offensive line coach Brad Davis. So was much of the roster, including Jayden Daniels, a dual-threat quarterback who has flourished since transferring from Arizona State.

Then there are the true freshmen standouts like starting left tackle Will Campbell, play-making linebacker Harold Perkins and Taylor, who also made a difficult, leaping, fourth-quarter touchdown catch between two defenders against Alabama.

Even Kelly conceded to being “emotional” as he took in the wild celebration Saturday.

“I knew after the Florida State game we were going to get better ... but I don’t think I have ever in my career looked at the crystal ball and said, ‘Hey, this is how many wins we are going to get,’" Kelly said. “What I did know is that they had fight in them."

Indeed, Kelly said, his decision to call for the 2-point conversion was inspired by the spirit and commitment his players had exhibited since their season-opening setback: “I’m willing to do anything for this group because they have shown that they will make it happen some way.”

If they can make it happen again at Arkansas this Saturday and at Texas A&M on Nov. 26, they'll wrap up Year 1 of the Kelly era in the SEC Championship game and, at the very least, a major bowl game — if not a berth in the College Football Playoff.