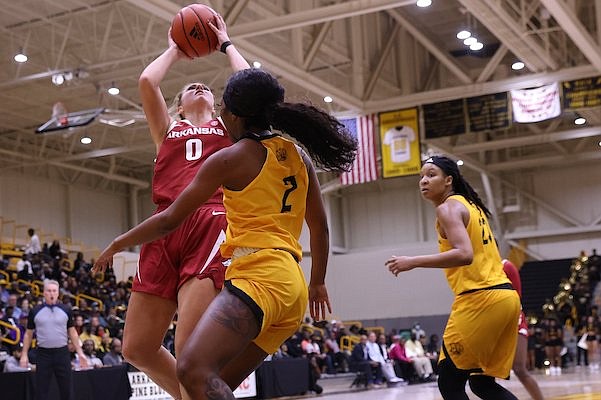 Saylor Poffenbarger (0) puts up a shot for the Razorbacks during a game against UAPB at the H.O. Clemmons Arena in Pine Bluff on Monday, Nov. 7, 2022.

PINE BLUFF — With only 32 minutes of competitive action since her junior year of high school, Saylor Poffenbarger just wanted to see a shot go down.

Not four minutes into Arkansas’ season opener Monday night, Poffenbarger got that needed bucket, a jumper that put the Razorbacks up 4-0.

Normally, she might relax at that point. But after 2 1/2 years of little more than practicing, Poffenbarger wanted to make the rest of them.

It wasn’t all pretty for Arkansas in its first-ever trip to the University of Arkansas-Pine Bluff, yet the Razorbacks managed to ride a 27-7 second quarter to a 70-50 victory at H.O. Clemmons Arena to kick off their 2022-23 campaign. Poffenbarger made 3 three-pointers in the opening half, finishing the night with 12 points, double her total in a dozen games at Connecticut in 2020-21.

The third-year freshman was one of four Arkansas players in double figures — Samara Spencer led the way with 15 points on 6-of-15 shooting from the field and Erynn Barnum and Chrissy Carr added 14 and 12, respectively.

“It’s incredibly hard to take as much time off as she’s had,” Razorbacks Coach Mike Neighbors said of Poffenbarger. “There was a brief stretch there where we really got it going and she’s hard to guard because of her size.”

That stretch came at the start of the second quarter. With Arkansas (1-0) leading only 15-10 after the game’s opening 10 minutes, the visitors quieted the home crowd with a run of 14 straight points to take control.

“We just kind of settled in,” Neighbors said. “The Lions were so high with the energy that band brought. It may have backfired because it gave our kids the energy too. … Our pace took a toll in the second quarter, we took better shots [and] we got to the foul line.”

The foul line wasn’t pretty for either team.

The Razorbacks shot 17 for 36, with Barnum hitting just 3 of 9 attempts and Spencer finishing with 2 makes on 8 tries. UAPB (0-1) ended the night 12-of-27 at the line, somewhat buoyed by Georgia transfer Maori Davenport’s 8-of-13 outing.

“It looked like we hadn’t shot a free throw,” Golden Lions Coach Dawn Thornton said. “And we’ve been spending so much time on that.”

But Thornton was pleased with the atmosphere in UAPB’s home arena. More than 3,000 came to watch the third all-time meeting between the in-state foes.

“This is what being at an [Historical Black College and University] looks like,” she added. “This is a hostile environment, we want to make it that way. … We embrace that, the culture that’s here that we’ve established.”

Neighbors, a native of Greenwood, emphasized that he wants to continue to play true road games against other Arkansas-based programs. The Razorbacks will play all four of the state’s Division I programs this season, with a visit to the University of Arkansas-Little Rock in less than two weeks.

“I always wondered why we didn’t play those games when I was a kid,” Neighbors said. “It’s important to grow our state, and I’ve said it since day one, the day is coming when we’re going to lose one of these.

“I want a day when we’ve got five Arkansas teams in the NCAA tournament. … When this state works together, we do great things.”

For Poffenbarger, the raucous crowd was, in some ways, the perfect way to get back into the swing of things.

She described the crowd as “relentless.” Neighbors mentioned that he heard chants of “SEC” and “overrated.”

Getting outrebounded, 35-32, and making just two of 17 field goals in the fourth quarter weren’t what Arkansas would’ve necessarily hoped for. But there wasn’t too much complaining after starting the year in the win column.

“When you get a group where everyone’s super competitive and wants the same thing, it kind of makes it fun,” Poffenbarger said.