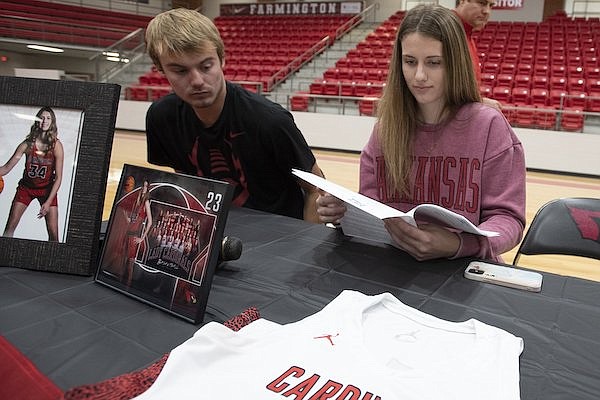 Farmington basketball player Jenna Lawrence (right) and her brother Gabe Lawrence look through paperwork as she signs a national letter of intent to play for the Arkansas Razorbacks on Wednesday, Nov. 9, 2022, in Farmington.

The latest is Jenna Lawrence, who signed a national letter of intent with Arkansas on Wednesday at Cardinal Arena in Farmington. Lawrence is in her second year at Farmington after transferring from Melbourne, where she led the Bearkatz to consecutive Class 2A state championships as a freshman and sophomore. Success has continued to follow Lawrence, who led Class 4A Farmington to a 34-2 record as a junior.

“I committed [to Arkansas] my sophomore year, so I’ve been waiting so long for this day,” Lawrence said. “I can’t believe it’s finally here. Melbourne made me who I am, Farmington made me who I am, and I’m so excited to continue my career at Arkansas.”

Lawrence’s versatility and athleticism were evident last season even as she made the jump from Class 2A at Melbourne to Class 4A at Farmington. Lawrence was selected All-State after averaging 17.4 points and 9.4 rebounds for the Lady Cardinals, who finished as state runner-up in 4A after losing 42-41 on a late three-pointer by Nashville. The 6-3 Lawrence, who plays every position on the court except point guard, shot 38.7% from beyond the arc while making 71 three-pointers last season.

“She’s a kid who can impact the game on both ends of the floor,” Farmington Coach Brad Johnson said. “Offensively, she’s an elite-level shooter. She has the size and tenacity to score from anywhere on the floor. She’s a fantastic teammate, just what you want a Razorback athlete to be.”

A Greenwood native, Neighbors is keenly aware of the high quality of girls basketball talent in the state, especially after coaching himself at Bentonville and Cabot and as a former assistant coach with the Razorbacks. Five athletes who played high school basketball in Arkansas are listed on the Razorbacks’ roster, including top recruits Jersey Wolfenbarger of Fort Smith Northside and Maryam Dauda of Bentonville. Avery Hughes of Bentonville, Loren Lindsey of Fayetteville, and Erynn Barnum of Little Rock Central are also on the 2022-23 Arkansas women’s roster.

Former Fayetteville star Sasha Goforth, who transferred to Arkansas after signing originally with Oregon State, has stepped away from basketball to concentrate on her health concerns.

“That’s one thing I love about Coach Neighbors,” Lawrence said. “He puts in-state players first and makes them feel special. That’s how I fell in love with the program, the way they treat in-state players.”

Basketball season starts soon at Farmington, and Lawrence hopes to end her high school basketball career by playing in a state championship game for the fourth straight year. But she knows there is plenty of work ahead, including working to improve her own game.

“I need to work on my offensive and defensive game, for sure,” Lawrence said. “I need to drive to the basket more and I need to do a better job shooting with a hand in my face.”