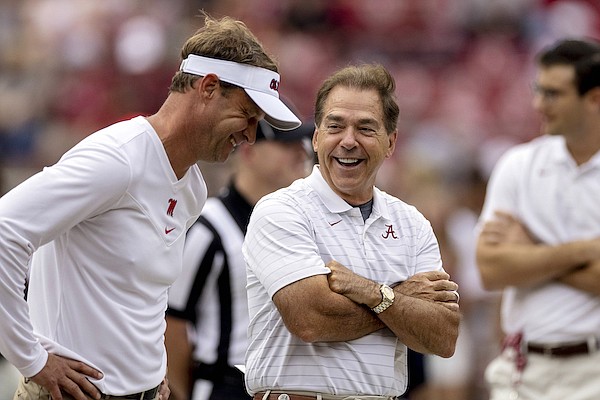 Ole Miss head coach Lane Kiffin, left, and Alabama head coach Nick Saban share a laugh as they meet in the middle of the field before an NCAA college football game, Saturday, Oct. 2, 2021, in Tuscaloosa, Ala. (AP Photo/Vasha Hunt)

Nick Saban is used to wearing the crown.

He’s the Greatest Of All Time and the king of football.

He’s also apparently very hard to work for, and when he hired Lane Kiffin to overhaul the Alabama offense, Saban still tried to keep a tight rein on him.

It lasted almost three full seasons before Kiffin bailed for the Florida Atlantic job, a far cry from Tennessee, Southern Cal and the Oakland Raiders.

From afar, Kiffin and Saban sniped at each other for a while, but after the Owls went 26-13 and Kiffin landed in Oxford, Miss., he has played nicer with everyone.

Understand, Kiffin is probably a natural-born smart aleck, but at 47 years of age seems to have learned how to control his sharp wit.

Kiffin and Saban face each other this Saturday in Oxford when 7-2 Alabama takes on 8-1 Ole Miss.

Alabama is favored by 111/2 points, coming off a hard loss to LSU and Ole Miss is trying to stay in the hunt for the SEC Championship Game or at least a major bowl game.

The two coaches have played nicely all week and probably will continue to, but how much would Auburn be willing to raise the salary of a coach who just beat Alabama?

Only two former Saban assistants have done that, but with the Auburn job open and the search on for a top shelf coach, the armored car may be backing up to Kiffin’s door.

Kiffin already appears to be the No. 1 candidate at Auburn, and if he adds a win over the G.O.A.T. to his resume the only person smiling more than Kiffin would be his agent Jimmy Sexton, who has negotiated some of the richest contracts in college football coaching history.

A fine group of inductees, but all the press release talked about was what they did at the Rose Bowl, which makes a little sense, but all had accomplishments that had nothing to with the Grandaddy of them all.

Especially Bezdek, who was the head football coach at the University of Arkansas from 1908-12 and had a record of 29-13-1.

Here’s what the official bio on Bezdek said:

Bezdek is the only coach to bring three different teams to the Rose Bowl Game. Bezdek led the Oregon Webfoots to a 14-0 victory over Pennsylvania in the 1917 game, marking the first win for a West Coast team in The Granddaddy of Them All. He was then selected to coach the Mare Island Marines in the 1918 Rose Bowl Game, which featured two military teams due to World War I.

Finally, Bezdek brought Penn State to Pasadena for the 1923 Rose Bowl Game for the first Rose Bowl Game to take place at the Rose Bowl Stadium. Bezdek is also the only person to be a head coach in the NFL and serve as the manager of a Major League Baseball team. He was inducted into the College Football Hall of Fame in 1954. Bezdek died in 1952 at the age of 68.

Here’s some of what it should have included:

He was the first coach to go undefeated at Arkansas that had a schedule with multiple games (in 1895 John Futrall led the Hogs to a 1-0 season), and after beating LSU in Memphis during that 1907 season he said the team played: “Like a wild band of razorback hogs.”

The students loved the name, and Arkansas has been the Razorbacks ever since.

Hugo Bezdek had a lot of great accomplishments during his life, and the Rose Bowl was some them.