Arkansas beats UCA in front of thousands of elementary students 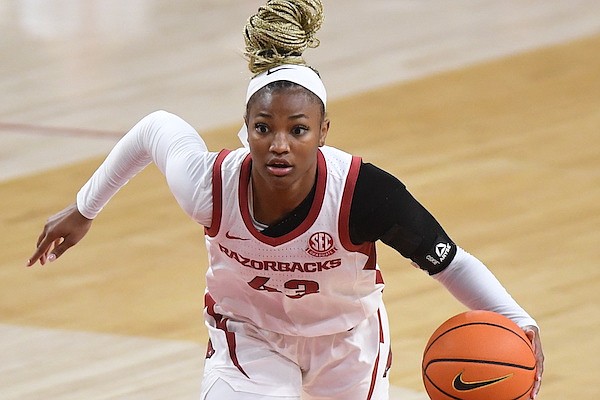 Arkansas guard Makayla Daniels is shown during a game against Central Arkansas on Friday, Nov. 11, 2022, in Fayetteville.

FAYETTEVILLE— On a morning when noise was aplenty, the University of Arkansas women’s basketball team made certain points were few and far between for Central Arkansas.

The Razorbacks took down the Sugar Bears 72-34 on Friday at Walton Arena.

Arkansas (2-0) played its Elementary Day game with 7,410 people in attendance, which was the 15th-largest home crowd in program history.

“I’ll ask everybody to ask your questions about eight decibels higher than you normally do,” Arkansas Coach Mike Neighbors said to begin his post-game news conference. “Because my ears are still ringing from the first explosion of sound when our kids came out. That’s the loudest it’s been in there in a long time.”

“I’m glad our players had the opportunity to play in such an amazing, amazing atmosphere,” Rushing said. “Now, I don’t know how my head’s going to beat it tonight.”

Arkansas set the tone in the first half defensively. The Razorbacks held the Sugar Bears to 14 points off 14.8% shooting and raced to a 35-14 halftime lead.

“We’re a lot better defensively,” Neighbors said. “I walked in there at halftime, and I was chewing them pretty good, and I looked down and said, ‘Wait a second, they’re shooting 17%.’ ”

The Sugar Bears (0-2) finished 21.8% from the floor, including a 2-of-19 clip on three-pointers. Rushing credited the Hogs for giving her team fits.

“I thought it was really good the way they were jumping out aggressive on us,” she said. “I mean, knock us, hit us, make us tough. Those are the things that will help us down the road.”

Leading the Razorbacks was senior forward Erynn Barnum, whose 19 points and nine rebounds nearly gave her a second consecutive double-double. She made a career-high nine free throws on a perfect shooting day at the line.

“It’s no surprise to us,” teammate Makayla Daniels said of Barnum’s performance. “I think it’s a surprise to other people, but not to us. We see her do it in practice every day. Throughout the two games that we played, she’s been consistent.”

Daniels chipped in 14 points and a game-high four assists. The Razorbacks scored 24 points off the bench, including a 10-point, 5-rebound effort from freshman Maryam Dauda.

The Razorbacks will return to Walton Arena on Monday night to face Tulsa. UCA will next face Lindenwood in the team’s home opener Tuesday.