Razorbacks overwhelm Missouri State in first round of NCAA Tournament 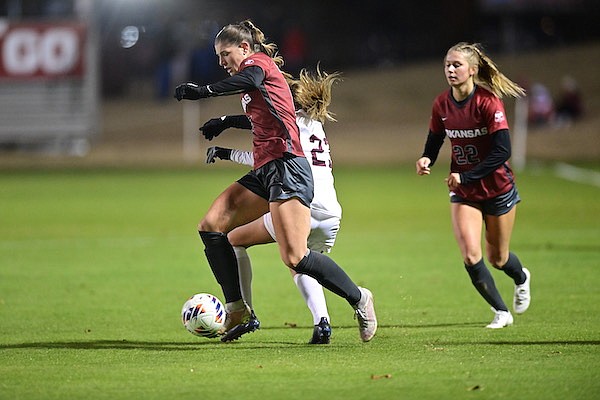 Arkansas' Jessica De Filippo possesses the ball during an NCAA Tournament game against Missouri State on Friday, Nov. 11, 2022, in Fayetteville. De Filippo scored three goals to help the Razorbacks to a 6-0 victory.

FAYETTEVILLE — Arkansas’ soccer team scored three goals in the first six minutes and defeated Missouri State 6-0 on Friday in the first round of the NCAA Tournament at Razorback Field.

The Razorbacks (12-3-4) advanced to play Ohio State in the second round of the tournament next week. The Buckeyes (11-5-3) scored in the 107th minute Friday to defeat Bucknell 1-0 in double overtime.

Senior forward Jessica De Filippo scored her first career hat trick with three goals, including two in the first half as the Razorbacks built a 4-0 lead at halftime. De Filippo had never scored more than one goal in a game.

Ava Tankersley began the Arkansas scoring flurry with a header on a cross to the far post from Ainsley Erzin 26 seconds into the game.

"We thought we had a good week of training," said Arkansas coach Colby Hale, who improved to 8-1 in first-round NCAA Tournament games. "We had some time (to prepare after a first-round loss at the SEC Tournament), we thought we were going to come out flying, and we did. We scored a goal pretty early, which I thought set the tone for the game."

De Filippo and Ellie Podojil each added goals over a 45-second span in the sixth minute to extend the Razorbacks’ lead to 3-0. De Filippo’s roller from 19 yards away went past diving Missouri State goalkeeper Camielle Day, and Podojil arched a left-footed attempt from 18 yards over Day’s head on the second touch following her own short corner kick.

Tankersley had another header disallowed in the 13th minute when she was offside. De Filippo added a header in the 16th minute on a far-post cross from Podojil, who had two assists.

De Filippo’s third goal was a strike to the top-right corner from 20 yards in the 80th minute.

"She scored three goals tonight," Hale said, "but I thought her distribution and her winning first and second balls was as good as it's been all year."

Mia Wehby added her first goal of the season with a header with 20 seconds remaining.

"We put stuff on frame, we were good on sets and our service was very good," Hale said. "When we're buzzing like that, we're going to score some goals."

Arkansas extended its home unbeaten streak to 21 games dating to 2020. The Razorbacks improved to 7-0 in home games during the NCAA postseason, with all games played since 2016.

Arkansas won’t know its second-round playing site until Saturday, when Saint Louis is scheduled to host Memphis in a first-round game. If Saint Louis wins, it will host second- and third-round games.

Razorback Field would be a host site next week if Saint Louis loses Saturday.