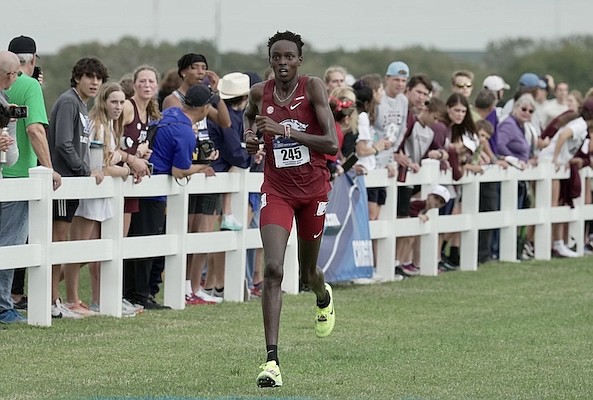 The No. 22 Arkansas men were led by individual champion sophomore Patrick Kiprop, who covered the 10,000-meter course in 30 minutes, 4.9 seconds.

Kiprop claimed the 22nd individual title by a Razorback and the first since 2014 when Stanley Kebenei won the event.

The finish gave the Razorbacks their 11th consecutive appearance in the NCAA Championship field. They finished fourth in the past two NCAA meets.

The 23rd-ranked Arkansas women got an individual win from junior Isabel Van Camp, who led the Razorbacks to their 11th consecutive team title. Van Camp covered the 6,000 meters in 20:01.9.

All six Razorbacks finished among the top 25 to earn All-Region honors. Arkansas’ team finish included places 1-4-11-12-21 for a score of 49 points.

Van Camp claimed the 14th individual title by a Razorback in the South Central Region and the first since Taylor Werner in 2019.

It will be the 12th consecutive appearance for Arkansas' women in the NCAA Championship field, and the 25th time to advance to the national championship meet for the Razorbacks since their first appearance in 1982.

The NCAA Championship will be held next Saturday in Stillwater, Okla.