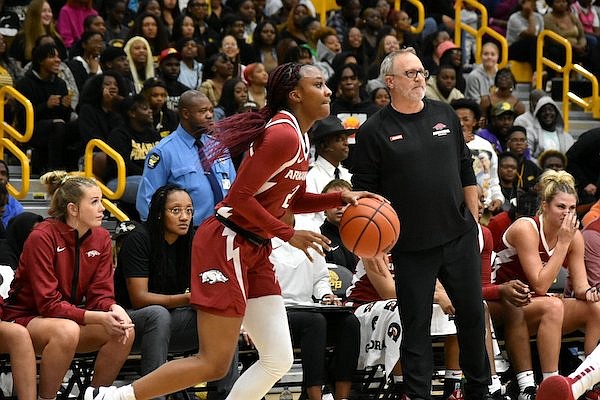 FAYETTEVILLE— The University of Arkansas women’s basketball team will take the court at Walton Arena today for the first time this season and face a second-straight in-state opponent when it tips off against Central Arkansas at 10:30 a.m.

Arkansas’ (1-0) home opener will be played in front of an atypical crowd. Over 4,000 kids are expected to be in attendance for the team’s Elementary Day game. It’s the first time the Razorbacks have been able to host the event since 2019.

“Bring those earphones you have,” Arkansas Coach Mike Neighbors said. “It’s a steady hum of a buzz. I warned our newcomers that our young fans will cheer when UCA makes a basket just as much as they do for us. And the loudest cheer will be when ‘Baby Shark’ comes on.”

The matchup against UCA (0-1) comes four days after the Razorbacks traveled to Arkansas-Pine Bluff and beat the Golden Lions 70-50. On the same night, the Sugar Bears lost by 40 points at Kansas State.

Neighbors, whose team is scheduled to play every in-state Division I team before season’s ends, said he feels it’s a “duty” to play those games.

Monday’s game in Pine Bluff was played in front of a sold-out Clemmons Arena. Neighbors said the gym was the loudest he’d ever been in.

“We had a day off yesterday [to reflect on the game], and the word ‘memorable’ came up,” Neighbors said. “Our kids said they will remember that game as [much] as any game that we’ve had. The environment was electric … Their student body was amazing. The band, amazing. The loudest gym I’ve ever been in, in my life.”

Preparing for the Golden Lions, whose roster looked completely different from last year, was difficult for Arkansas. Neighbors said he is glad the Sugar bears have played a game, and he has film to prepare the Razorbacks with.

“I don’t feel like we probably have a true scouting report on them, but I think enough that our kids will be comfortable to go out and trust what we work on, on a daily basis,” he said. “The more film you have, the more confident I think coaches are going in. I think we always worry a little bit, but specifically more early in the year without film to prepare for.”