UA soccer will host next 2 rounds after NCAA Tournament upset 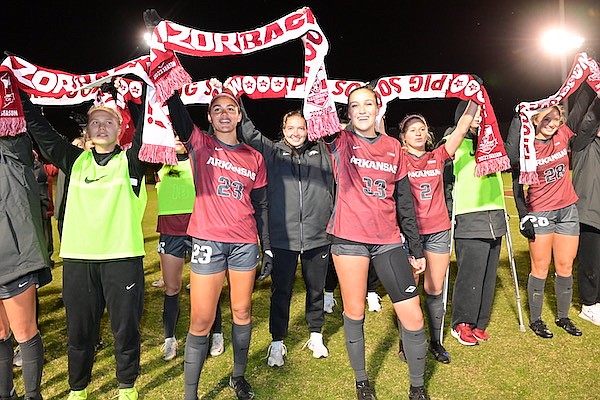 Arkansas players celebrate after a 6-0 victory over Missouri State in the first round of the NCAA Tournament on Friday, Nov. 11, 2022, in Fayetteville.

FAYETTEVILLE — Postseason soccer will continue at Razorback Field next week.

Arkansas will host second- and third-round NCAA Tournament games after Memphis upset Saint Louis 1-0 on Saturday. Saint Louis was the No. 2 seed in the Razorbacks' bracket and would have hosted next week with a first-round victory.

Arkansas, a No. 3 seed, will host sixth-seeded Ohio State, and seventh-seeded Mississippi State will play 15th-seeded Memphis on Friday in the second round at Razorback Field. Game times and TV information have yet to be announced.

The winners of Friday's games will play next Sunday in Fayetteville, regardless of whether the Razorbacks win their second-round game. The team that advances from the Fayetteville quadrant will play the following week in the Elite Eight, needing one victory to advance to the College Cup.

Arkansas (12-3-4) defeated Missouri State 6-0 in its first-round game Friday. The Razorbacks extended their home unbeaten streak to 20 games and improved to 7-0 all-time in home games during the postseason.

Arkansas lost 2-0 at Mississippi State in its SEC opener.