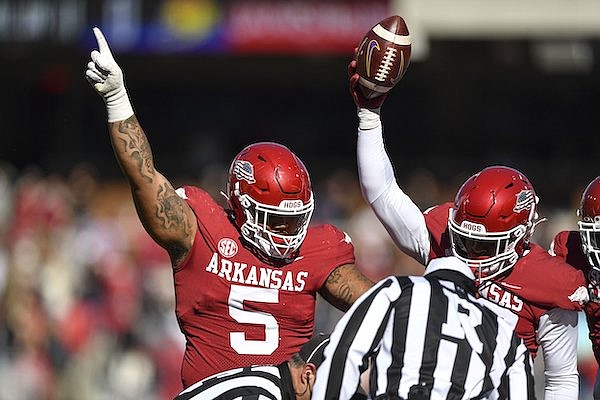 Arkansas defensive linemen Cameron Ball (5) and Dorian Gerald (23) celebrate a fumble recovery by teammate Latavious Brini during a game against LSU on Saturday, Nov. 12, 2022, in Fayetteville.

FAYETTEVILLE — Give the Arkansas’ Razorbacks “D” an “A” against LSU.

Maligned much of the season for giving up too many big plays and missing too many tackles, the University of Arkansas defense came to play on Saturday against the No. 7 Tigers.

Unfortunately for Arkansas and its fans, the stellar defensive effort came in a 13-10 loss to LSU.

Seven Razorbacks combined for Arkansas’ most sacks against an SEC opponent since they had eight in a 24-7 victory at Auburn in 2012 — when the Tigers finished 0-8 in conference play.

It was the second-most sacks for the Razorbacks this season after they had eight against Missouri State.

“He’s a presence on the field, and he’s always done a great job,” said junior linebacker Drew Sanders, who led the Razorbacks with 12 tackles. “I mean, he’s a great player, and he just continues to get better and better.”

Senior safety Latavious Brini had a hand in two turnovers in the first quarter when he intercepted a Daniels’ pass and recovered a fumble by Daniels that was forced by defensive end Jordan Domineck.

LSU came into the game averaging 34.8 points and 440.9 yards to rank 29th nationally and 32nd nationally.

So how did Arkansas hold LSU to the Tigers’ second-lowest total this season after a 270-yard game in a 21-17 victory at Auburn?

“I think we had a really good game plan, No. 1,” Pittman said. “And the kids played extremely hard and tackled really well.

“I told our kids I thought it was the best our defense played all year, and not really even close.”

It was the fifth-fewest yards allowed total in Barry Odom’s three seasons as Arkansas’ defensive coordinator and the second-lowest in an SEC game.

When Arkansas beat Texas A&M 20-10 last season, the Razorbacks held the Aggies to 272 yards. The lowest opponent total against an Odom defense at Arkansas was the University of Arkansas-Pine Bluff’s 223 last season when the Razorbacks beat the Golden Lions 45-3.

“I thought it was awesome just seeing all of them rally around the ball, tackling and swarming people,” Razorbacks center Ricky Stromberg said of the defense’s effort. “I thought it was great. It put confidence in us. We’ve just got to execute better.”

Arkansas running back Raheim Sanders said he could tell going into the game the defense was ready.

“Before the game they had a lot of energy,” Sanders said. “I felt they were going to attack, and that’s what they did.”

LSU’s 13 points were its fewest the season and the lowest total for an Arkansas opponent this season. Daniels completed 8 of 15 passes for 86 yards — the fewest against the Razorbacks since Texas had

Arkansas’ defense only allowed 86 yards passing, the fewest this season and the fewest since Texas had 57 yards in 2014 when the Razorbacks beat the 31-7 in the Texas Bowl.

The previous low was in Liberty’s 21-19 victory over the Razorbacks last week, when the Flames didn’t score in the second half.

“I think it’s definitely something we can carry over in the next game,” said Arkansas safety Hudson Clark, who had nine tackles and two pass break-ups Saturday. “Just play with our hair on fire and keep this momentum going.”

Drew Sanders said the defense has been playing better progressively throughout the season.

“I mean, we’ve had some hiccups in some games, but I think defensively we’re coming together as a unit,” Sanders said. “These past two games I think we’ve played some good ball, but we’ve still got some things to clean up.”