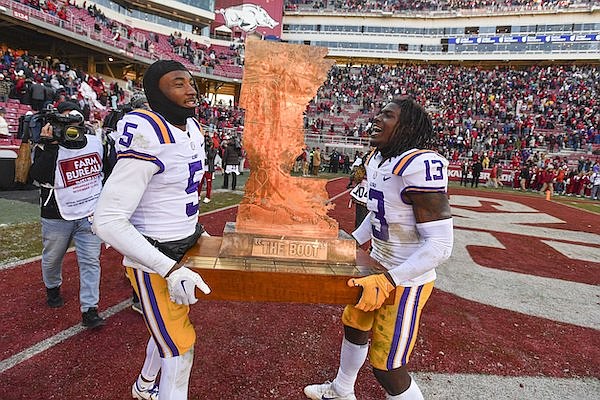 FAYETTEVILLE — University of Arkansas Coach Sam Pittman just asked his team to give themselves a chance at the end to upset No. 7 LSU.

The Razorbacks delivered on that.

But they could not handle game-wrecker Harold Perkins all day and could not do it with the game on the line after Arkansas reached its 38-yard line needing a field goal to tie in the final 80 seconds. The freshman linebacker Perkins, who had the flu this week, beat right tackle Ty’Kieast Crawford and hit quarterback Cade Fortin’s arm as he drew back to pass, forcing a fumble the Tigers recovered with 1:19 remaining to hold off Arkansas 13-10 on Saturday.

“I thought our defense played lights out, by far the best game we’ve played all year,” Pittman said. “We covered well, pressured the quarterback well, and for the second week in a row we couldn’t get anything going offensively.”

The game-saving sack was Perkins’ fourth of the day, tying an LSU school record.

Perkins also hit Fortin and dislodged the ball as he started to pass on third down on the Razorbacks’ previous possession. The play was originally ruled a fumble and LSU recovery, but the replay review changed the ruling to an incomplete pass.

A crowd of 73,750 watched a defensive slugfest in which Arkansas, playing without ace quarterback KJ Jefferson and right tackle Dalton Wagner, managed a season-low 249 yards and held LSU to 284, the fewest for an Arkansas opponent this season. The game also featured 13 punts, 12 sacks — 7 of them by the Razorbacks — and 17 tackles for loss.

The Razorbacks (5-5, 2-4 SEC) have lost back-to-back home games, but Pittman said the fire was there on Saturday as opposed to last week in a 21-19 loss to Liberty with a dinged-up Jefferson.

LSU (8-2, 6-1 SEC) earned a spot in the SEC Championship Game, based on Ole Miss’ 30-24 loss to Alabama later in the day, and re-claimed the Golden Boot Trophy after its one-year stint in Fayetteville. The Tigers pulled off a worst-to-first season in the brutal SEC West in their first year under Kelly.

“Their team was prepared, and they were a great challenge for us today,” Kelly said. “But we found a way to win on the road, and that’s what this is really about in terms of, when you play in a league like this, and particularly the SEC West, find a way to win.”

Arkansas, which dropped its second trophy game of the season, now has two chances to get bowl eligible: At home against Ole Miss next week and at Missouri on the day after Thanksgiving.

“I think we had a really good game plan, No. 1,” Pittman said. “And the kids played extremely hard and tackled really well. All week our whole thing was, ‘We’re blitzing to get him on the ground.’ ”

Daniels completed 8 of 15 passes for 86 yards, threw his second interception of the season on LSU’s first drive and lost a fumble and had 10 rushing yards on 19 carries.

Kelly said Daniels ran into a few of the sacks.

“They did a really good job of standing on the edge,” he said. “They didn’t want Jayden outside the pocket. We should’ve been stepping up in the pocket a lot more. We tried to get outside. They were not going to let us outside. … I thought they were well-coached in terms of what they were trying to accomplish.”

Arkansas, trying to ride the wave from its premier defensive effort, could not take advantage after two takeaways in the first quarter from safety Latavious Brini.

He intercepted Daniels at the Arkansas 40 on the first series, but the Razorbacks went three and out with the ensuing possession.

With Arkansas leading 3-0 late in the first quarter, Jordan Domineck popped the ball out of Daniels’ hand and Brini recovered at the Tigers’ 10.

Again, the Razorbacks failed to capitalize, even after AJ Green ran for 8 yards to the 2 on first down.

The Tigers tackled Green for a 1-yard gain on the next snap, then stopped Hornsby for a 2-yard loss. Pittman rolled the dice on fourth and goal and Hornsby was stopped for no gain up the middle by Mekhi Wingo.

“We got them down here, let’s score a touchdown because I thought we were going to have a struggle on offense,” Pittman said of his rationale on the fourth-down try. “We already had them down there. We could go up 10-0, and we didn’t make it.

“I know you’re giving up three points at that point, but I just thought the risk to reward was better going for a touchdown there.”

The Razorbacks had trouble generating first downs or sustaining momentum without Jefferson, who practiced sparingly for a second consecutive week with a bruised clavicle. Pittman said he is expected back next week.

Malik Hornsby started at quarterback, and the redshirt sophomore went 4-for-9 passing for 24 yards and rushed 18 times for 37 yards. He was in on the first eight series, which amassed 108 yards, nine first downs and just one scoring drive, a 10-play, 46-yard sequence in the first quarter that ended on Cam Little’s 28 yard field goal for a 3-0 lead.

Hornsby came out after slipping of his own accord for a 12-yard loss on a failed fourth and 2 from the LSU 48 midway through the third quarter. That turnover on downs fed into LSU’s only touchdown drive of the game.

Daniels completed a 26-yard pass to Kayshon Boutte to the Arkansas 1 and Josh Williams, who ran for a game-high 122 yards, plowed in on the next play for a 13-3 LSU lead.

Fortin came in and provided a spark in the passing game, going 8 of 13 for 92 yards and a touchdown.

His pinpoint 40-yard deep ball touchdown to Matt Landers down the sideline drew the Razorbacks within 13-10 with 13:17 left in the game.

LSU held the Arkansas running game to a season-low 133 yards and 2.9 yards per carry.

The Razorbacks had three possessions after pulling within 13-10 but could amass just 10 plays and 35 yards on those series.

The first was a three and out, the second reached the LSU 43 after a 14-yard run by Raheim Sanders, and the third netted a 14-yard catch by Jadon Haselwood before Perkins made his game-deciding defensive play.