Perkins not your typical freshman 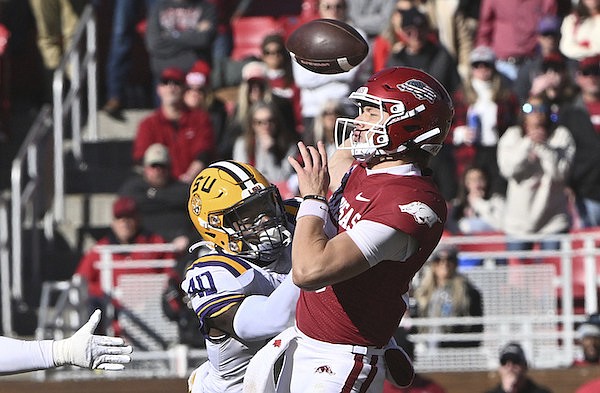 LSU linebacker Harold Perkins Jr. (40) knocks the ball away from Arkansas quarterback Cade Fortin (10) during the second half of an NCAA college football game Saturday, Nov. 12, 2022, in Fayetteville. The play was called a fumble and recovery by LSU but was reversed after officials reviewed the play. (AP Photo/Michael Woods)

Sam Pittman and the Arkansas Razorbacks played to win.

Who would have thought that with 1:27 left in the game that they would be 62 yards away from beating No. 7 LSU, which was fresh off a win over Alabama?

The Razorbacks lost 13-10 in what was a defensive slugfest, but considering they played the game without starting quarterback and leader KJ Jefferson, who has an injured shoulder, and without a starting defensive back because of a personal foul — he was arrested last Saturday night — it didn’t seem likely it would be close.

It was only until freshman phenom Harold Perkins forced a fumble on a pass attempt which LSU recovered with 1:19 to play that the Tigers had survived a big scare.

Perkins was the biggest question the Hogs couldn’t find an answer for as the Cypress, Texas, native had 8 tackles, 4 of them for losses, broke up a pass and had 2 forced fumbles.

There will be some with 20-20 hindsight who will say Perkins’ efforts might have been for naught if the play calling was different, especially on the Hogs’ third possession when a fumble recovery by Latavious Brini put the Razorbacks in play at the LSU 10.

AJ Green got 8 yards but was stacked up on second down. Malik Hornsby, filling in for Jefferson, lost a yard, and on fourth and goal from the 3 the substitute quarterback tried to run for the touchdown and came up short instead of Arkansas trying a field goal.

Going for it that early sent a message to LSU, and it resonated on an afternoon when it took an official’s bad spot on a fourth down to keep an LSU drive alive and let the Tigers run the clock down to 1:43.

The play was reviewed and Pittman protested loudly when the first-down call on the field was upheld.

Every ESPN replay showed the receiver went out of bounds short of the first-down marker.

The referees didn’t decide the game, though. The defenses did as they went toe-to-toe.

The Tigers came into the game averaging 440.9 yards of offense per game, and the Razorbacks, led by linebackers Drew Sanders and Bumper Pool, who combined for 22 tackles, held them to just 284 yards and one trip into the end zone.

Arkansas sacked the usually elusive Jayden Daniels seven times, and by the end of the day he had only 10 yards on the ground despite being the Tigers’ leading rusher with 619 yards.

He came to Fayetteville averaging 220 yards per game passing and was limited to 8-of-15 passing for 86 yards.

Arkansas’ offense didn’t really get on track either, getting into the red zone just two times.

Cade Fortin showed why he had been considered the No. 2 quarterback when he replaced Hornsby who passed for 24 yards and netted only 37 on the ground.

Fortin entered in the third quarter with the Hogs trailing 13-3.

On his second drive, which started at the Arkansas 6-yard line, he sparked the Razorbacks to their best effort of the day.

He hit a 29-yard pass and then ran for 17 yards, putting the Tigers on their heels and that’s when he found Matt Landers for a 40-yard touchdown. Just like that, hopes and dreams were born.

The next two Razorback drives combined for 15 yards, but the defense continued to wreak havoc on the Tigers. The defensive scheme could not have been drawn up better.

When the Razorbacks got the ball back for the final time, they got a 14-yard pass to their own 38, an incompletion and then came the freight train known as Harold Perkins caused the fumble that allowed LSU to escape.

Perkins was Coach Brian Kelly’s only 5-star signee last season, but he won’t be the last for a coach who turned the program around in his first season.