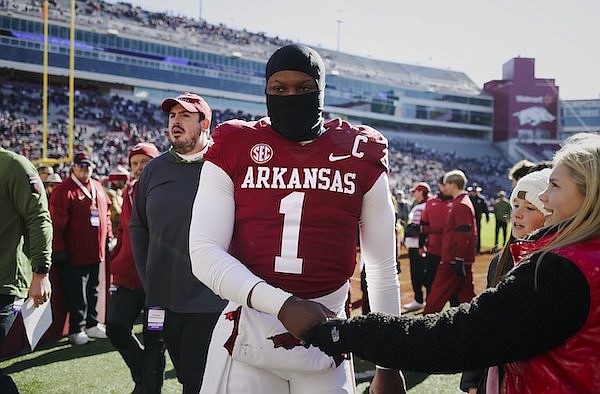 Arkansas quarterback KJ Jefferson walks off the field prior to kickoff against LSU on Saturday, Nov. 12, 2022, in Fayetteville.

FAYETTEVILLE — For the second time this season University of Arkansas No. 1 quarterback KJ Jefferson had to miss a game and Malik Hornsby and Cade Fortin filled in.

The roles for Hornsby and Fortin were reversed on Saturday when Jefferson missed Saturday’s game against No. 7 LSU because of a shoulder injury.

When Jefferson didn’t play at Mississippi State after taking a hit to the head the previous week against Alabama, Fortin started and Hornsby came on in relief and played well in the Bulldogs’ 40-17 victory.

Hornsby started on Saturday but struggled and was replaced by Fortin in a game LSU held on to win 13-10 at Reynolds Razorback Stadium.

Without Jefferson — who has started 21 games the last two seasons — the Razorbacks struggled to move the ball, especially through the air.

Hornsby and Fortin combined to complete 12 of 22 passes for 116 yards.

At Mississippi State, Hornsby came off the bench to complete 8 of 17 passes for 234 yards and rush 8 times for 114 yards when Fortin struggled in the first quarter.

But Hornsby couldn’t duplicate that production against LSU. He completed 4 of 9 passes for 24 yards and on his final snap — a fourth and 2 from the LSU 48 — Hornsby stumbled and fell to the turf for a 12-yard loss.

“I feel bad for him because he didn’t have the success that I thought he would or anybody in the locker room thought he would,” Arkansas Coach Sam Pittman said. “But he’ll bounce back.”

Fortin, a senior transfer who played previously at North Carolina and South Florida, replaced Hornsby with 5:25 left in the third quarter and had some success, highlighted by a 40-yard touchdown pass to Matt Landers.

It was Fortin’s second career touchdown pass and the first since he was a true freshman in 2018 and had one in North Carolina State’s 34-28 overtime victory against North Carolina.

“I thought it sparked our offense,” Arkansas center Ricky Stromberg said of Fortin coming into the game. I thought it’s what we needed.”

Fortin finished 8-of-13 passing for 92 yards and also had a 17-yard scramble.

Pittman said he determined Jefferson — who started and took every snap for the Razorbacks in last week’s 21-19 loss to Liberty — wouldn’t play against LSU because his shoulder needs time to heal.

Hornsby took nearly all of the first-team reps in practice the last two weeks, according to Pittman.

“If we played [Jefferson] again today it would have been off basically no practice, and we’d be in the same boat again next week as well,” Pittman said on Arkansas’ postgame radio show. “Obviously we believed in Malik and believed in Fortin and felt we could win the game.

“But when it all came down to it, we didn’t have a choice. KJ wasn’t really ready to play and we told the kids Friday it was Malik’s game and we went from there.”

Pittman said he’s hopeful Jefferson will be healthy enough to play next Saturday against Ole Miss.

Arkansas right tackle Dalton Wagner, a sixth-year senior who had made 14 consecutive starts and 37 in his career, didn’t play Saturday because of a back injury.

Wagner, a team captain, did go to midfield for the pregame coin toss along with quarterback KJ Jefferson — who was dressed out but didn’t play — and linebacker Bumper Pool and safety Simeon Blair.

Blair became a team captain when safety Jalen Catalon suffered a season-ending shoulder injury in the opener against Cincinnati.

So the Razorbacks played without three of the five players who have been captains this season.

“I knew, obviously, that those guys were out,” Arkansas Coach Sam Pittman said. “But it kind of hits you when you call the captains up to go out there, and you go, ‘Man, two of them ain’t even going to play, and the other one’s out.’

Jefferson dressed out, but he didn’t play.

Junior Ty’Kieast Crawford made his first start in two seasons with the Razorbacks in place of injured Dalton Wagner.

Crawford had three starts at North Carolina-Charlotte in 2020 before he transferred to Arkansas.

Freshman cornerback Quincey McAdoo made his first career start after having an interception last week in his first game playing on defense after switching from receiver.

Sophomore Jayden Johnson started at nickel back in place of Myles Slusher, who was suspended for the game along with freshman Anthony Brown after they were arrested for disorderly conduct last Saturday night.

Slusher and Brown both practiced this week and worked on the scout-team defense.

LSU senior defensive backs Greg Brooks and Joe Foucha, who transferred from Arkansas after last season, both started for the Tigers and had four tackles each.

McGlothern started and had two tackles. Jackson played off the bench and combined on a sack with Zack Williams.

Arkansas freshman punter Max Fletcher made his first appearance since the Mississippi State game on Oct. 8.

With Arkansas facing fourth and 10 from the LSU 43, Fletcher came and hit a pooch punt that was downed at the Tigers 12 by Simeon Blair with 4:00 left.

Fletcher lost his starting job to Reid Bauer after having a 25-yard punt on his only attempt at Mississippi State that dropped his season average to 38.3 yards on 27 punts.

That was a night game and the Razorbacks beat the Tigers 17-0 to end a 17-game SEC losing streak.

Arkansas was held without a first-half touchdown for the sixth time in Sam Pittman’s three seasons as coach, and in back-to-back games for the first since 2019 in losing to Auburn 51-10 and Alabama 48-7.

LSU led 6-3 at halftime Saturday after Liberty had a 21-3 halftime lead at Arkansas last week in a game the Flames held on to win 21-19.

LSU improved to 43-23-2 all-time against Arkansas, including 5-2 in Fayetteville. The Tigers are 20-11 against the Razorbacks since Arkansas joined the SEC in 1992.

David Bazzel, the former Arkansas linebacker and the creator of the Golden Boot Trophy awarded to the Arkansas-LSU winner, served as the Razorbacks honorary team captain.