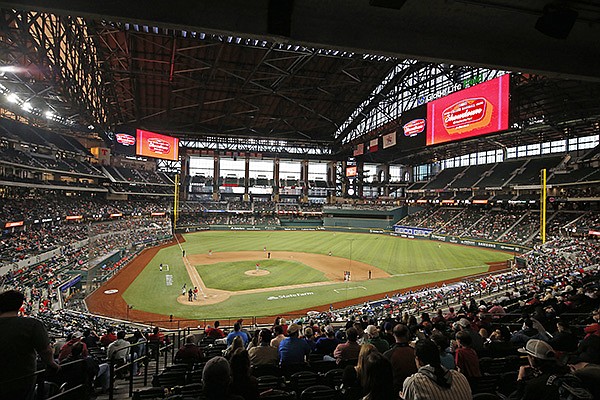 Globe Life Field is shown prior to a game between Arkansas and Texas on Sunday, Feb. 21, 2021, during the College Baseball Showdown in Arlington, Texas.

FAYETTEVILLE — Arkansas will open its 2023 baseball season with a game against Texas at the College Baseball Showdown on Feb. 17.

The game between the Razorbacks and the Longhorns is scheduled to begin at 7 p.m. at Globe Life Field in Arlington, Texas, according to a schedule posted to the stadium’s website this weekend.

The Razorbacks are playing in the College Baseball Showdown for the second time. They defeated Texas Tech, Texas and TCU at the inaugural event in 2021.

Arkansas has not played Texas or TCU since those games in 2021. The Razorbacks won two of three games against Oklahoma State and eliminated the Cowboys from their home NCAA regional earlier this year.

“’It will be great competition to start the season,” Arkansas coach Dave Van Horn said last week. “And the good thing is we know we're going to play in comfortable weather. If it's nice they can open that roof, and if not, close it up. I think we're going to play in front of some huge crowds for college baseball.”

Globe Life Field seats 40,300, but attendance was limited when the Razorbacks went there in 2021 due to covid-19 protocols. Arkansas’ three games there that year were at the maximum allowed capacity of around 15,000.

A few weeks following the baseball team’s trip to Arlington in 2021, Jared Schrom and Shawn Decker of REV Entertainment — the organizer of events at Globe Life Field — traveled to Fayetteville to meet with Van Horn about his experience. They asked him if the Razorbacks might agree to play there every year moving forward.

Schrom, vice president of REV Entertainment, said in September the Razorbacks have committed to playing at Globe Life Field through 2026, and conversations have been had about 2027.

Van Horn previously said the Razorbacks have agreed to play in the 2024 College Baseball Showdown against Oklahoma State, Oregon State and Michigan.

Other future games in Arlington might not necessarily be part of that six-team event, Schrom said. The Rangers are exploring the potential for hosting additional early-season college baseball events beyond Opening Weekend.

“The goal for us from Day 1 was to have the best programs play at Globe Life Field,” Schrom said in September. “Arkansas is just that. We love having them down here because of the level of baseball that they play.

“But beyond that, I mean DFW just has such a strong following for Arkansas, the alumni base, the fans. It’s easy for them to get here. So between the the alumni locally and the folks traveling from Fayetteville, it’s kind of a no-brainer.

This year's College Baseball Showdown includes the three Big 12 opponents that Arkansas will play, as well as Vanderbilt and Missouri from the SEC. Each game in Arlington will feature one SEC team and one Big 12 team, and teams from the same conference will not play each other at the event.